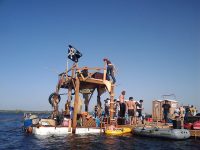 Since 2009, a small collection of sailboats, houseboats, rafts, and other watercraft have gathered each summer to create a floating city in California’s Sacramento River Delta. Called Ephemerisle, the week-long event was originally created by the Seasteading Institute as way to demonstrate how ocean-based communities might function.

Now, it serves as a kind of Burning-Man-at-sea, a participant-led festival in which each “island,” or collection of boats, is “responsible for it’s own rules, self-reliance, system of government, etc.” This year’s event runs from July 11-17, 2016, with an online Survival Guide warning attendees that this “is a bottom-up driven gathering. There are no central organizers responsible for ensuring your safety or fun.”

Atossa Abrahamian describers her arrival at the festival like this:

“It looked, at first, like a shapeless pile of floating junk, but as the boat drew closer, a sense of order emerged. The island was made up of two rows of houseboats, anchored about a hundred feet apart, with a smaller cluster of boats and yachts set off to the west. The boats had been bound together with planks, barrels, cleats, and ropes, assembled ad-hoc by someone with at least a rudimentary understanding of knots and anchors. Residents decorated their decks with banners and flags and tied kayaks and inflatable toys off the sides….”

The event’s main values are Seasteading, Art, Learning, and Community. Participants are encouraged to lead workshops and other activities, particularly around nautical skills and self-governance.

Initially, the event was intended as a kind of experiment in libertarianism. The Seasteading Institute envisions autonomous cities based in international waters, and hoped Ephemerisle would reflect those principles:

The reality turned out a bit differently. The Seasteading Insitute bowed out after the first year, when insurance costs threatened to derail the event. And it is held in central California rather than the ocean, with the Coast Guard regularly patrolling the delta. Some years, windstorms have damaged the boats.

In a video documentary about the first year’s event, organizer Patri Friedman says:

In recent years, participants have become more ambitious, even creating a multi-boat “archipelago” connected by wooden pontoon bridges. Some of the boats at the festival in 2015 included a “130-foot 1930s research vessel,” dance rafts, and a “Delorean chassis modified into a hovercraft.” An “interactive kinetic sculpture artboat” called the Artemiid attended in 2015 and has raised funds to return this year.

Long-term seasteading communities may still be a ways off, but several projects hope to bring the concept closer to reality. One organization, called Project Oceanus, plans “to pilot [a ship] to the Pacific Garbage Patch and 3D-print the plastic into the foundation for a floating city.” The group is accepting applicants for its Emphermisle island in 2016.

What do you think of seasteading communities? Will humans eventually live at sea? You can learn more about the event on its website or Facebook group.

See the documentary about the first Ephemerisle here: