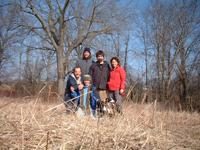 Creating a Community of Homesteaders 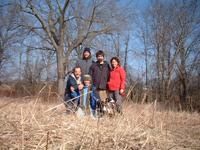 Aron (back left) with all the members of Red Earth Farms in early 2007. 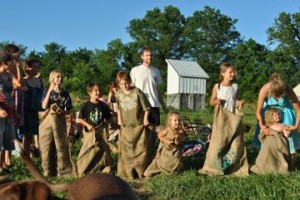 Aron Heintz (back center) watches the kids gearing up for sack races at 2012 Land Day. 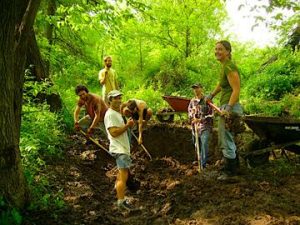 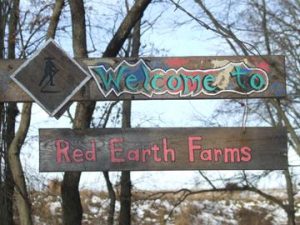 This morning I gave a tour to some nice folks visiting our intentional community. They arrived a little earlier than planned so when they called from their cell phone to say they were only a few miles away I brought my breakfast mug of oatmeal with me to eat as I walked the quarter mile from my house to the parking lot where they left their vehicles. I greeted them and as they got geared up for our walk I learned that they were all most interested in taking in information about the styles of buildings that our different members have constructed, and that they were also keen to hear about the overall structure of our community—Red Earth Farms—which is set up as a community land trust.

I usually bow out of giving tours, leaving that task up to some of my more extroverted community neighbors. However, this time I hadn’t, and as I walked around answering questions I remembered that there is something extra special about talking with interested people about the intentional community in which I live.

At our community you’ll see many passive-solar buildings and some interesting rocket heater stoves, as well as quite a few greenhouses attached to the south side of buildings. There are also rainwater catchment, mouldering toilet, and animal housing examples. We have a wide spectrum of building styles ranging from a two-story strawbale home to small energy-efficient homes built using much more conventional methods.

Moving on to land with no preexisting infrastructure is tough. Doing that kind of thing requires a pioneering spirit. Creative solutions are reflected in the buildings of our different members. We do not have rules about what materials a person can use to construct buildings. Some people went for low-cost, some went for speed of construction, for aesthetics, low ecological impact, or all of the above in different combinations. And keep in mind we are doing this in rural northeast Missouri, a land of few zoning laws or building restrictions. We are granted the ability to construct things as we see fit for the most part and then live with the results of what we’ve crafted.

Our intentional community formed in the Spring of 2005 with four of us living in the ’70s era double-wide trailer parked on land across the road from Dancing Rabbit Ecovillage (established in 1997) and three miles away from Sandhill Farm (established in 1974). We were a group of agriculturally minded, independent, idealistic people with a similar vision—homesteading…but not isolated.

None of us had debt. We were all fit and not afraid of physical labor. We had all spent time in places of other culture—Russia, Central America, Alaska. We were influenced by the study of permaculture and wanted to live a low-impact life. We valued diversity and were humble enough to admit we didn’t necessarily know what would be the best solutions for living in a sustainable manner—though we were all gung-ho to try our best and put our ideas into action.

We wanted to structure our intentional community so that members could be relatively autonomous on a multi-acre leasehold. We desired that members be empowered to enact their personal visions, whatever they happen to be, just so long as we held similar fundamental values and agreed to adhere to a few policies. We threw around catch phrases like “we can agree to disagree” and have “freedom of choice of implementation.” We liked the idea of creating affordably priced plots of land where a leaseholder would have creative control over their particular parcel.

The 76 acre tract we purchased was sold to us at a much more affordable price per acre than what smaller plots in the area were going for. However, we did not have the means to pay for it all outright. Aron Heintz, an acquaintance of Alyson’s from the communities circle, was our investor who backed the venture. He was a man who had made a fair amount of money at a young age and was looking for socially responsible ways to invest it. I have to confess that it was a little difficult at first ironing out the details. Though Aron didn’t desire to live in our community, he had some strong attachments to how we set things up with the thought that perhaps one day he would want to join. He wanted to be more deeply involved than a typical investor might have been, and there were times when his ideas of how we should set things up did not coincide with our own. But it all worked itself out, and on Summer Solstice, with Aron funding the purchase, we closed on the land and had a lovely party to celebrate. (We didn’t pick the closing date, it was just chance. Our original closing date had been April Fools Day but the seller pushed it back. No joke.)

Aron’s name went on the deed when the land was first purchased. The task was then ours to form the legal entity that would purchase the land from him. Coming up with a name for our intentional community turned out to be a surprisingly difficult part of the process, as did figuring out exactly what type of legal entity would best suit what we wanted to do. It was also quite a task searching for example documents of how to go about setting up a community land trust. Writing bylaws and making decisions about what needed to be incorporated in them took a lot of time. We borrowed heavily from a few sources, blending things together to create exactly what we envisioned. We vowed that when we were through we would always keep our founding documents openly available online for anyone else to use as a model in forming a similar community.

We structured our community so that a nonprofit corporation, Red Earth Farms Community Land Trust, Inc. (REFCLT), holds title to the land. Only members in the nonprofit corporation can become leaseholders. After making a one-time payment, they hold a 99-year lease on their piece of land. The lease is renewable, inheritable, and salable, the only caveat being that it would have to pass to someone approved to be a Red Earth Farms member. In many ways it is a lot like ownership with the one-time payment for land paid at the current lease fee, the amount that a member would pay to lease an acre of land, which is determined by REFCLT.

It took nearly three years for us to write the documents and go through the steps to transfer title of the deed to REFCLT. Perhaps unsurprisingly, we did not attract many new members during those formative years. Often visitors who were potentially interested in membership stated that they would be hesitant to commit to living in our community until the land trust officially owned the land.

In order for REFCLT to buy the land, we negotiated with Aron a mortgage deal for 73 percent of the purchase price with the remainder being fronted by the existing community members as lease payments. We agreed to a three-year term loan, to be refinanced with Aron when the term was up, that did not require us to make payments on any certain schedule. Payments were to be made as we got incoming members leasing land. And we did begin attracting new members who eventually became leaseholders. It was a gradual process.

In order to prevent speculation and to keep the price affordable, land can be transferred and leased only for the current lease fee amount. This number is tied to the mortgage with Aron and increases over time. As the last acre is leased out we will have paid off the loan. REFCLT does not intend to hold property in common long-term. We encourage co-ops to form if there are groups of people who would like to manage property in a certain way together. We’d like to minimize our time spent in meetings and avoid compulsory cooperation.

I’m pleased to report that the frequency of our group meetings has gone down from once a week to only once a month. And lately the meetings we do have often finish earlier than the allotted hour and a half. Community members now connect in more enjoyable ways such as our weekly potluck dinners and work parties that rotate location so each homestead gets a recurring opportunity to have neighborly help on big projects. We also see each other at less structured gatherings and connect over sharing things such as child care, machinery or tools, and rides to town.

The choice to locate our community of homesteaders where we did brought many advantages. We gain so much from interactions with the vibrant ecovillage next door and from picking the brains of communitarians who’ve lived in the region for many years. There are social opportunities and work opportunities that would otherwise not exist in such a rural location, and area locals have long been exposed to the idea of intentional community so are less likely to raise their eyebrows at us. Being near other established communities helps immensely to mitigate the feelings of isolation one can experience setting up a household on land where community neighbors are out of eye-sight.

After seven years, with nearly all of the available land leased out, we can say that our project has been a success. We have received a lot of interest over the years in this format of an intentional community of homesteaders. At our last annual board meeting we entertained the idea of expanding so as to accommodate even more people who might wish to join in with our vision. However, we all agreed that we would supportively pass the torch on to new people in other places but not look to increase the size of our holdings at Red Earth Farms. We are happy to no longer be spending so much energy and time on drafting documents and recruiting new members. We’re glad to get down to the dirty work of just living our lives.