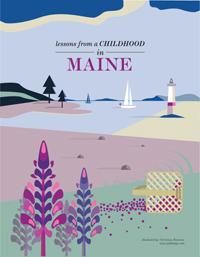 Lessons from a Childhood in Maine

As a child growing up in Downeast Maine, I learned about community from an early age. Community meant boiling stinking pots of brown beans for suppers in support of the neighbor diagnosed with cancer, hours spent rehearsing for the town theatre production, and summers in the blueberry fields earning a few dollars a quart. As much as the wild beauty of Maine demanded community of her residents, more than the place, it was my parents who ingrained in my siblings and me a sense of service.

It all makes sense if you know my mother is a Lutheran minister, born of Swedish stock in the Midwest, raised with the sense of duty and embarrassment at pleasure that is a hallmark of the American Swedes. Not only was my mother forced to attend a hated summer camp each year, she had to pay for half of it. Rising early, she would bake Swedish coffee bread, delivering it to the neighbors in the dark hours of dawn before school.

While my mother’s community was built on foundations of hard work, my father learned community by proxy. The son of an absent factory owner and sickly mother, he grew up in Washington, DC with the aid of a nanny and two older brothers. Much like the protagonist in Truman Capote’s “A Christmas Memory,” my father was shipped off to the elite boarding schools of his day, and when he could, joined the legions of his peers disenchanted with the excesses of life and moved to Maine.

The story goes that my father had a girlfriend when Ed, a friend who frequented the Seagull on Main Street, Blue Hill, first told my dad about the new girl in town. Whether they met before being cast as leads in The Mikado, I don’t remember. But pictures show my beautiful young mother singing on the small stage at the Grand Theater in Ellsworth, and my handsome bearded father singing back. The girlfriend disappeared and my parents got married, the community coming out, and bringing food, for their potluck wedding supper. It was as Maine as you could get.

And Maine our life was. In the beginning my parents lived in a small cabin on some land my dad bought with a friend. They had no running water or electricity. The outhouse lacked a door and on winter nights I’m told you could do your business with the backdrop of moon and stars reflected on the frozen snow.

Blue Hill and the surrounding towns were ripe for the kind of childhood pictured in water-colored stories of Maine. We spent a lot of time outdoors: cutting our own Christmas trees, making maple syrup, and raking blueberries in the summertime. My father built a wooden swing set on the side lawn, and many an early evening we could be found climbing her limbs or riding bikes around the rotting crab apple tree.

Maine was magical for more than her scenic wonders. The kind of people that my parents joined in the ’70s were musicians, activists, thinkers, and artists. My friends’ parents’ cars were covered with bumper stickers against the Contra war in Nicaragua, or world hunger. “Bread, Not Bombs” was a favorite.

Growing up in Maine, community wasn’t so much of a concept I was aware of. It was just the way it was. But if today we understand the idea of community, as a child in Maine what I learned was the reality, governed by a few simple rules.

The first: community is not a choice. As kids we helped because our parents told us to, and because it was what they did.

The second: everyone needs a hand up sometimes. As a child I learned that community wasn’t a far away continent (although sometimes it was that too), it was the kids we shared the backseat with on the way to school and the moms we bumped into at the local IGA supermarket.

Recent political debates about community seem devoid of these two lessons. Some politicians neglect to speak about the need for individual responsibility in serving the poor, advocating for a large role for government. Government is an essential glue for keeping community together; many community-based initiatives depend on government monies. But my experience in Maine taught me that we must also be intentional about taking responsibility for the people that live around us, and even more intentional about teaching that responsibility to our children.

Other politicians place too great a burden on individual and family, promising to drastically cut the supports offered to those in need. But while they push communities to take greater responsibility for their own, they advocate policies that would further separate the Haves from the Have-Nots, making it less likely that the groups interact, learn something from one another, or have the impetus to help each other out.

The promise of community in Maine was the ability to make a difference you could see and experience. Both individualism and governmentalism threaten to take us further from knowing people who are different than we are, and therefore further from benefiting from the reciprocity of giving to those in need. This seems like a losing proposition. After all, we Americans are progress-driven; when we cannot see the outcome, we forget why we are working.

So what does community cost—and who is going to foot the bill? From the perspective of someone who grew up in Maine, the answer is pretty simple: community is as valuable as we make it. Like the current Bitcoin circuit taking the planet by storm is showing – the more we invest the more it is worth. And investing in community has to be driven as much by the individuals who live in it, as the government that supports and regulates it.

It is clear that this country has a lot of work to do in helping individuals and communities re-build a sense of self-efficacy, a belief that we can shape our own destiny, and that everyone has something to contribute.

There is a role for community, government, and business in re-building our belief in each other, which must begin with habitualizing service. Communities could jump on the time-banking bandwagon, giving individuals a platform to trade their skills in exchange for those they are lacking. Imagine swapping Spanish lessons for help balancing the checkbook, or babysitting in exchange for lawn mowing. It is reciprocity in action.

Government and employers have a role to play as well. Government should mandate service learning as a standard component of every child’s education though programs like Youth Services Opportunity Project, or Health Leads. And more employers could support their employees in giving back by allowing individuals to set aside 10 hours a month for service to the community, while offering benefits for doing so, like a day off after 50 hours served.

The work ahead is hard. The good news is that we already have a lot of tools in place to get it done. We just need to put them to use. Actions repeated become habits. Let us put in place the building blocks that shape habits in support of community, rather than solely in service to our self.

Filed Under: All Blog Posts, Communities Articles, Community Where You Are, Issue 158