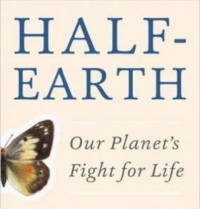 Edward O. Wilson’s new book, Half-Earth, offers a timely proposal for the conservation movement: dedicate half of the planet’s surface to nature, and we’ll be able to hold off the worst losses of biodiversity. If half or more wild spaces can be protected from destruction, “more than 80 percent of the species would be stabilized” (p.4).

Wilson, now 86, is sometimes called the “father of sociobiology,” and is the author of On Human Nature, which won the Pulitzer Prize for non-fiction in 1979. He popularized the term “biophilia” to describe “the connections that human beings subconsciously seek with the rest of life.”

Despite the dangers of climate change and rising population levels, Wilson remains optimistic about the planet’s future, and points out that we have already protected 15% of the Earth’s surface through government and conservation efforts. Protecting a full 50% would be an ambitious, but not unreasonable, goal.

The problem, Wilson writes, is that the rate of extinction is rising far beyond pre-human levels. And since many species are co-dependent on one another, it’s not enough to protect individual species in isolation. Some species depend on wildlife corridors in order to range freely; others have symbiotic relationships with nearby animals, plants, or bacteria. Others are at the mercy of invasive species. Wilson writes:

“A reduction in area results in a fraction of the species disappearing in time by roughly the fourth root of the area. If 90 percent of a forest is cut, for example, about half of the species will soon disappear that would have otherwise persisted. At the beginning, most of the species may survive for a while, but roughly half will have populations too small to persist for more than a few generations.” (p.57).

Half-Earth explores many of these species and habitats in detail. Some of the areas that Wilson calls on us to protect are familiar ones: the California Redwoods, the Amazon River Basin, the Serengeti. But he also introduces us to some unexpected places: the McMurdo Dry Valleys of Antarctica, which are home to microbial life; Lake Baikal in Siberia, the world’s deepest freshwater lake; and Socotra, an island close to Yemen.

In particular, Wilson would like to see connected wildlife corridors that allow animals to migrate along their natural geographical routes. North-south routes are important for seasonal migrations, while east-west routes will allow species to escape the regional effects of climate change. 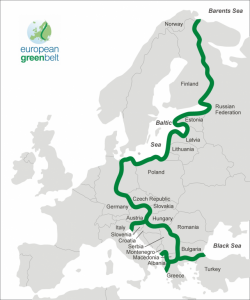 He describes one project in which conservationists bought up parcels of land along the Gulf Coast, with the goal of restoring long-leaf pine in an uninterrupted stretch from Florida to Mississippi: “The corridor would allow larger animals, including bears and cougars, to reoccupy regions from which they had disappeared decades ago” (p.179).

Other corridors are planned in parts of New England and in the Yellowstone region. The European Green Belt follows the route of the Iron Curtain from the Barents Sea to the Black Sea. Tony Hiss writes in The Smithsonian that, “One of the most mind-opening aspects of the Half Earth quest is that it’s a reimagining of the possible, bringing into focus what had been a blur.”

Learn more by picking up a copy of the book, or check out the Smithsonian article.

Filed Under: All Blog Posts, Sustainability