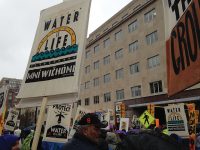 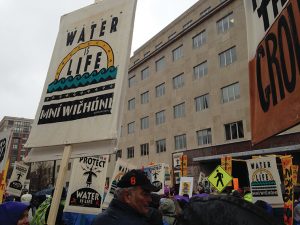 Last winter I spent six weeks living with the indigenous water protectors at Oceti Sakowin Camp, supporting their efforts to turn back the oil pipeline being built under the Missouri River next to the Standing Rock Reservation, part of the homeland of the Lakota people. As a white person from New England, this was the longest period of my life that I’d spent in a space where I was the racial minority. The thing I missed most deeply when I left the camp in late January was the vibrant and continual negotiation of racial and colonial privilege.

Oceti Sakowin Camp was not a safe space physically: police violence was endemic on the front lines, the camp was under constant threat of being raided or razed by militarized forces, and despite the no-alcohol policy in the camp, illicit alcohol use and unhealthy interactions were recurring problems within the Water Protector community. The camps were the most visible manifestation in recent times of the colonial war of genocide and land theft that has been going on in North America since the first European settlers arrived, and it did feel like a war zone. As one indigenous water protector observed, “This is the exact same war we’ve been fighting for 500 years…except now they are shooting us with rubber bullets, and we have iPhones to record it with.”

Non-indigenous allies were welcomed in to join the resistance against the pipeline, while the movement remained under indigenous leadership, with a clear call for peaceful prayer as our sole tactic. I was one of the white people who came to support the work. My first few days in camp were a crash course in what NOT to do, mostly learning by making mistakes. After attending the newcomer orientation I understood how to avoid causing the most common offenses, but it immediately became very clear that I was unconsciously embodying a lot of colonial culture, and needed to shut up and listen so that I could relearn some very basic ways of being in community. One of the most impactful concepts taught in the orientation was this: When an indigenous person corrects you, the proper response is gratitude. Rather than being offended or defensive, recognize that it is a huge gift and act of trust for someone to take the time to tell you how to do something properly in our culture. When you react with resistance and protest, you dishonor and reject that gift. Just say thank you and change your behavior, that is all that is required.

In late December I found a home in Two Spirit Camp, which was a community for queer, transgender, and two spirit water protectors and white allies. The camp was led by a Lakota two spirit woman with an intact lineage of spiritual tradition, and out of the 16 or so residents, just over half were indigenous. Most of the camps or oyates (smaller sub-camps within the larger water protector camp area) were for either specific tribal groups (such as the Oglala Lakota Camp or Michigan Camp where most of the Anishinaabe water protectors lived, which were usually wholly indigenous) or specific task forces (such as the Medic Oyate, which was predominantly white). Two Spirit Camp was one of the few camps where indigenous and non-indigenous people lived together and supported each other as a family group.

Everyone in Two Spirit Camp had a keen awareness of colonialism and white culture, and the ways those systems of privilege pervade all our lives. While Oceti Sakowin Camp was in a war zone, the Two Spirit Camp community felt like one of the safest places I’ve ever been when it comes to racial tensions. Unlike what I’ve seen in groups working on racism in the outside world, we were able to move beyond the White Fragility and White Guilt that completely bog down many attempts to communicate about privilege and oppression. Our community was built on a common mission (stopping the pipeline), and all of us had given up a great deal to come and live in the sub-zero temperatures of a North Dakota winter to defend the waters. We depended on each other for daily survival tasks like chopping firewood, cooking meals, and keeping a fire going in each tipi or tent. We had good reason to trust that everyone’s intentions were good, and that gave us the safety to speak honestly about white privilege when it manifested in our camp.

Nearly daily, I would receive feedback about my unconscious acts of racism: using a phrase with derogatory roots, displaying impatience that betrayed my sense of entitlement to any space I was in, making a joke about Spirit Animals that made light of the sacred traditions of Lakota culture. Because everyone at camp understood that we had all come to earnestly fight against colonial oppression, we could correct each other with an attitude of “Let me help you correct something you don’t realize is offensive” rather than an attitude of “You are such a bad person!” I did genuinely feel grateful every time I was corrected, because I knew it was a key way of helping each other unlearn patterns of oppression that are unconscious. We all felt an emotional freedom to speak our needs and reactions in a community bonded by love. We laughed constantly in that camp, letting the joy of community give us strength against the massive forces we were facing. When one of the jokes struck a sour note, someone would speak a correction, the jokester would apologize briefly, and then we’d keep on laughing.

The freedom to talk about these acts of unconscious racism without the fear of offending someone was something I deeply mourned when I returned to Vermont. Here, making a simple observation about colonial and capitalist patterns I see us enacting in our communities has lost me long-standing friendships very quickly. We don’t have a culture of “correction as a gift” and instead see correction as criticism. When I make observations about the white supremacist culture that is endemic even in our politically correct liberal communities, people get very defensive. I get these reactions as a white person talking to other white people, so I can’t imagine how much worse it would be to try to speak these things as a person of color in this environment. I’ve come to see our collective White Fragility as one of the key roadblocks that is holding us back from creating a more inclusive culture.

I wish I knew a magic formula for moving past White Fragility. So far what I have seen work at Standing Rock was a combination of five things:

Under these five conditions, White Fragility seemed to evaporate. I’m not sure if the same thing can be achieved in a predominantly white space like rural Vermont. Creating a norm of prayer and ceremony could certainly be done very poorly in a white space, since the tendency is to use culturally appropriative practices from other cultures.

The one space in Vermont where I’ve been able to consistently have the conversations I want to be having about colonialism and racism is a local decolonization solidarity group that has spent a year and a half educating themselves about colonization and received a lot of mentorship from a local indigenous elder. We are an entirely white group, but we can toss around ideas and analyses freely because we all trust that everyone is there to unlearn their unconscious habits that are harmful. We receive correction from each other gently and gratefully. Sometimes our conversations start to seem circular, as if we are only preaching to the choir, and we struggle with finding ways to bring these ideas to the wider community where we live.

Intentional communities tend to have strong shared value systems, and I think they would make wonderful environments in which to do this work of transmuting White Fragility into White Humility. Another thing we can do as white people is to get off our butts and put our time, money, and physical bodies into the struggles for an end to racial violence in this country. For me the pilgrimage of putting myself in service to an indigenous-led movement taught me things that have forever changed how I see the world. Both at home and on the front lines, we all need to be doing this work.

Murphy Robinson lives on unceded Abenaki territory, sometimes known as Vermont. She runs Mountainsong Expeditions, where she teaches archery, ethical hunting, and wilderness skills in a feminist, anti-racist environment. She is grateful that Mountainsong Expeditions recently acquired land through a beautiful community fundraising effort, and is also deeply uncomfortable with the colonial system of land ownership. She welcomes students and interns on this mountainside property for those who want to deepen their sense of nature connection and grapple with privilege together while building community. You can contact her through her website at www.mountainsongexpeditions.com.

Filed Under: All Blog Posts, Communities Articles, Community Where You Are, Issue 178, Life in Community