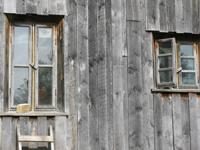 Intimacy in the Village Setting 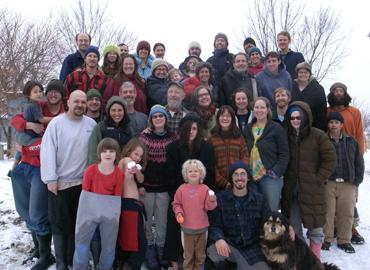 Since first I met Dancing Rabbit Ecovillage cofounder Tony Sirna at the Communities Conference in Willits, California in 1998, I have understood that the “village” part of ecovillage here was meant as more than a euphemism. Dancing Rabbit was intended to be more or less like the village of popular conception—small, rural, surrounded and supported by agriculture and practical arts, and made up of villagers whose lives would doubtless be intertwined in many ways.

When I subsequently arrived at Dancing Rabbit (located on 280 acres outside Rutledge, Missouri) for an internship in July 2001, I found a small group of people (at that time, members numbered perhaps 10, and the village hosted upwards of 20 interns over the warm season) with a lot of commitment to a beautiful vision. It was not a village yet. It did feel intimate, in the ways that we all worked together and relied on each other to feed ourselves, survive in our tents, and share the very small amount of sheltered space while trying to build some of the first structures. We were pioneering. Intimacy was born out of necessity, though aided by common purpose.

I met my future partner Sara, another intern at the time, that first morning as I reconnoitered the budding village. I had been deeply missing the intimacy of a close relationship prior to my arrival, and felt deep gratitude to the world and to circumstance when I quickly found that intimacy. Within a few weeks we were sharing a tiny tent in a field of tall grass. Within a couple months, I was beginning to think seriously that I might like to spend the rest of my life with her. This July we’ll celebrate 10 years together alongside our five-year-old daughter Aurelia.

At the time of that 1998 conference, I had already lived five years in the student co-ops in Berkeley, California, mostly in the co-op known as Lothlorien. The intimacy of that setting was like a drug to me; we cooked beautiful vegetarian food for each other, cleaned for each other, created and took part in elaborately prepared social events, sometimes fell in love with our house mates, and even studied together occasionally. It was the parallel education to my academic pursuits, and turned out to be the more important for me. I was hooked on the intimacy with my community mates that came from living in such close proximity and sharing so many events both routine and unusual in one of the most formative moments of our collective lives.

Sadly I began to see that I was facing an end to that particular intimacy; transience is built into the BSC (Berkeley Student Co-ops) experience, since you must be a student to live in them and are allowed only one grace semester. Lothlorien (my then home) possesses amazing cultural coherence under the circumstances, but at that time I agonized over the loss of important house members every year as they graduated (or moved into private housing, the wisdom of which I thought dubious at best). The pain of it was visceral. The idea of starting my own community, based on good land that I’d never have to leave, offered salvation for my particular torment, and grew deeply rooted in my dreams.

I worked on organic farms, homesteaded for a year, traveled around the world and across the US in search of community in its many forms as my desire for a more permanent home increased. At first that five-month stay in northeast Missouri seemed just another stepping stone to me. I still pictured mountains and forest and perhaps the ocean or a big river looming not far off in the distance when I dreamed about my own community. Sara was more sanguine than I about Dancing Rabbit, but indulged my fantasies so far as to begin looking for land with me in the Appalachians.

Then one day, home alone at our temporary abode in some quiet (and lonely) woods on the Maine coast while Sara was off visiting friends and family for a few weeks (including at Dancing Rabbit), it hit me: I could spend the next 10 years trying to start my own community, hoping I had enough charisma to attract others and instill dreams of community similar to mine in them; or I could give it a go in an existing community where I knew it was possible to do all or most of what I dreamed of, and spend the next 10 years doing instead of trying. Sara already thought Dancing Rabbit was the way to go, and I realized that if I really wanted community to succeed, I ought to support existing communities instead of splintering the energy still further.

We wrote a fateful letter to Dancing Rabbit, and arrived as members in April 2003. In the intervening years I have learned a great deal of intimacy. To be sure, my understanding and experience of closeness in a partnership with one person dwells in a different realm now than it did then. Alongside Sara I have stretched and molded the rudimentary sense of fulfillment in love I began with into a glittering, jeweled orb of deepest intimacy. We have changed each other, grown individually and together, built a house, birthed a child, and much else.

Without the supporting web of context, however, I cannot imagine having traveled so far or with such meaning. Dancing Rabbit and our neighboring communities Sandhill Farm and Red Earth Farms provide that context, and I will likely spend the rest of my life trying to fully appreciate the fathomless depths of intimacy inherent in building a village in all its lurid detail from scratch with 30-1000 friends and acquaintances. Whether by upbringing or predilection, I did not begin with a deep appreciation of intimacy beyond that of family or lover. I always thought of myself as having friends, but in retrospect I hardly understood what friendship really meant.

In our village I sooner or later see my community mates in nearly every shade of their existence. I do not have to share a bed or income with most of them to see it. We are building a pedestrian-based village whose human zone is “thickly settled,” to borrow a New England term. Between one dwelling and the next a frog often requires no more than a few leaps. In hot summer weather when the barriers between inside and out fade to nothing, I can hear my neighbors snoring, having sex, arguing, cooking, and just about everything else related to the act of living. It is both startling to my staid American sense of propriety and independence, and at the same time deeply humanizing.

These observations are perhaps nothing remarkable to a city dweller, but there is a certain anonymity to city life; the individual typically leaves those unintentional intimacies of home for work, play, commerce, and so on, losing his or her self in the multitude.

Here at Dancing Rabbit, I share limited space in often-cooperative facilities with my neighbors, and beyond the village are farm fields and forests. I may dine in an eating coop with them, share shower facilities, build compost piles with buckets of their mixed excrement, dive naked into the pond to cool off alongside them, grow, sell, trade, and eat produce with them, share a ride to town with a handful of them, sit through and participate in every conceivable form of meeting with them, find myself in conflict and its resolution with them, quietly lust after them, build a house with them, cry, laugh, run, scream, or die with them. I will also just watch them do many of these things. I share myself and so do they. Some more than others, but you cannot really hide from anyone here.

This is not the first time I’ve felt like I was re-learning and experiencing a life that was commonplace to the vast majority of my ancestors in the not-too-distant past. Yet for all that, I never experienced a tenth of it before deciding to embroil myself in the exquisitely mundane daily realities of this particular place and collection of people.

Before living in community, I found it very easy to play the mental game of comparing myself favorably to the blind, benighted masses of the world who didn’t care or didn’t know better about whatever it was I was concerned with (and whom I didn’t know). Since rooting myself in this intimate setting, I have found that game far harder to play, because I daily observe a much broader range of human behavior and foibles than just my own or my partner’s or child’s examples. I can plainly see, and cannot readily ignore, that my way is only one among many, and that I have a great deal still to learn.

Each time I see and learn, gratitude grows in me for this shared humanity, the vulnerability we each show each other, the gifts of love, time, and energy we daily give and receive, the example we show to every new person that sets foot here, which subsequently seeps out to help change our collective culture.

Despite this undeniable intimacy, we still struggle sometimes with elements of it, particularly in the more intentional forms like friendship. Without the situational closeness I share with all here, I fear I would rarely grow true friendship. I would be far lonelier. But I’m not. I do have this.

My friend Thomas wrote a poem of sorts to each person in the village one year for Validation Day (our version of Valentine’s Day). Most were typical, brilliant Thomas, with deep meaning likely hidden in apparent nonsense if only I was sharp enough to find it. I read mine many times, and have carried it since as encouragement to pursue as many more opportunities as I can to know him more: