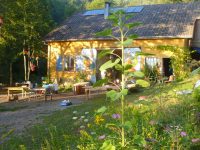 Community As Sanctuary: How These Retreats Offer Refuge in Rural Places

Some communities, like the Tonic Housing project in the U.K., were founded as a way to provide cohousing to LGBT elders in rapidly gentrifying cities. Others offer a refuge away from the city, a place where like-minded people can gather for retreats and other seasonal festivities.

For decades, the Radical Faerie movement has been creating “sanctuaries” for queer people of all genders in rural locations across the U.S. Founded in 1979, the Radical Faeries arose out of the gay rights movement as a way to “[challenge] commercialization and patriarchal aspects of modern LGBT life while celebrating pagan constructs and rituals.”

Some of these sanctuaries include Nomenus, in Wolf Creek, Oregon; Short Mountain in Tennessee; and Zuni Mountain in New Mexico. There are also sanctuaries in Australia, Thailand, the U.K., and France, and a Radical Faerie camp at Burning Man. While each of these locations are run independently, many of them host seasonal gatherings, such as festivals on Beltaine (May Day) and Samhain (Halloween).

The Wolf Creek Sanctuary, founded in 1987, was “[o]riginally conceived as a space for gay males to explore subject-SUBJECT consciousness together, [but] the Sanctuary and the groups that gather here have grown over the years into a vigorous tribe of diverse queer identities.” The land is managed by Nomenus, a consensus-based organization that operates as a Non-Profit Religious Corporation.

While some residents live at the sanctuary year-round, it’s most active in the summer, with some gatherings drawing hundreds of people from Oregon and California. Visitors are welcome to stay for up to two weeks, while “Stewards” and “Tenders” live on the land long-term. Meals are served communally, and guests are asked to “Give as you are able, but always give something.”

As social attitudes toward the LGBT community have changed, so have the Faeries. Providing a safe space for gay men is still a priority, but many gatherings welcome those “who see people of gay, queer, and trans identities as a distinct people with a distinct culture, way of becoming, and spirituality.” You can learn more about the Faeries at radfae.org and look for a sanctuary or gathering near you.

At another point on the gender spectrum are communities that offer sanctuary for women, such as the Susan B. Anthony Memorial Unrest Home in Athens County, OH. Founded in 1979, the 151-acre community was created to “provide feminist and ecological education for women; … to offer a safe and economical space for women to live, either for short-term stays or permanently; and … to make a safe rest and recreation space for women to use for camping, group events, daily use of the land or for retreats.” Workshops and activities are posted on the group’s website, and new visitors are asked to call or e-mail in advance.

A community in Florida, the Sugarloaf Women’s Village, is “dedicated to enhancing the lives of women by providing space to live, work, create, learn and play together in a lush, tropical setting.” Located in Key West, this community was started by Barbara Deming in the 1970’s and put into a land trust in 1999. The houses are reserved for lesbian residents, but all women are invited to visit and stay at the village for up to two weeks.

One community is embarking on an even more ambitious project – a feminist utopia near the South American borders of Guyana and Venezuela. Inspired by Herland, a 1915 sci-fi novel by Charlotte Perkins Gilman, the Jungle2Jungle project envisions a society free from capitalism and enforced gender roles. Although primarily made up of lesbians, the group also welcomes, and was co-founded by, transgender members.

Do you know of any other communities that function as safe spaces for a specific community? What kinds of experiences have you had at rural sanctuaries or gatherings? Leave your thoughts in the comments below.