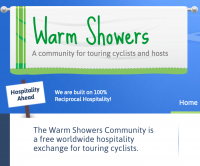 Going Biking This Summer? Try Out This Network For A Shower and A Place to Stay

Since 1993, the Warm Showers network has been connecting touring bicyclists with hosts willing to offer them a couch, shower, camping space, or other form of hospitality. Originally started as a listserv, it was developed into a full website in 2005, and currently has 86,000 active members and 36,000 active hosts around the world.

The site works a lot like Couchsurfing – guests and hosts each have profiles, hosts have full control over who to host and when, and both can post reviews of their experiences. The site is entirely free and based on “100% reciprocal hospitality.” According to its FAQs, “All members agree to host others either now or in the future, but for some members hosting may be in years or even decades in their future.”

The Adventure Cycling Association offers an etiquette guide with some tips on how to be a good guest and how to be a good host. It also looks at some of the differences between Couchsurfing and Warmshowers, and which one you might want to choose for a trip:

“Both Warmshowers and Couchsurfing serve an adventurous group of people — those wishing to travel the world far and wide. They facilitate a connection between people for hospitality’s sake. The main difference between the two groups is that Warmshowers is a network of bicycle travels exclusively.”

Unlike platforms like Airbnb, which have more formal booking systems, guests are encouraged to communicate directly with their hosts about length-of-stay and other expectations. Some hosts may offer a spare room or a couch, while others may just offer a shower and a place to pitch a tent. The network relies on reviews and feedback from its users to address any safety concerns.

Andrew and Freidel, two Canadians who have biked in over 30 countries, describe their experiences using the site like this:

“The hosts we stayed with through Warm Showers had wonderful bike touring stories of their own to share and there was often an instant connection because of that. Also, Warm Showers hosts always understood little things about travelling by bicycle, like the fact that arrival times can be uncertain, or just how much a cyclist can eat!”

Sound like the kind of travel adventure you’re looking for? Whether you’re biking around Europe, or up and down the California coast, why not see if there are any Warm Showers hosts along your route? There’s even an iPhone and Android app to make it easy to find and communicate with hosts while on the go.