The Placemaking Movement is Turning Cities into Communities

Over 15 years ago, a group of natural builders organized the first Village Building Convergence in Portland, OR. It’s partly the reason why the city is now dotted with colorful intersections, cob benches, and unconventional living spaces.

According to the organizers, “We recognized that modern life and the structure of our cities often don’t create opportunities to connect with our neighbors. In response, we created an annual event bringing people together to build elements of the village.”

Now, the convergence has become a regular summertime activity, with over 40 workshops and events taking place over 10 days and drawing participants from other cities in the region. It’s a great way to for people improve the quality of life in a neighborhood, while gaining hands-on natural building experience in the process.

And the event is growing beyond Portland. This year, Sepastopol, CA, hosted its second Village Building Convergence and last year Port Townsend, WA, hosted its first.

The concept of “placemaking” has an even longer history. In the 1960s, writer Jane Jacobs became a controversial figure for standing up against the creation of expressways in East Coast cities. She argued that cities should be designed for the benefit of people, not cars. 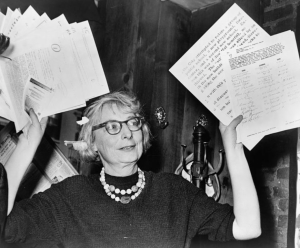 These days, groups like the Project for Public Spaces carry on that vision. Placemaking Chicago describes the 11 major principles of placemaking, including “The community is the expert. People who use a public space regularly provide the most valuable perspective and insights into how the area functions.”

Neighborhood activists all over the U.S. are catching on to these ideas. From advocating for new bike lanes to planting community gardens, residents are realizing that if they want a say in the direction of future development, they’ll have to play an active role in designing it.

In Moab, UT, residents are putting together a CommuniTea garden where neighbors can gather for peace and quiet or for socializing. The owner of the property says he doesn’t want to see the whole city become overrun with buildings and parking lots. Placemaking projects like this one are one way to ensure they never do.

Want to get more involved in placemaking in your city or neighborhood? See if your region has placemaking event like the VBC, or check out the events at the Project for Public Spaces or on FIC’s event page. Placemaking Week will take in September in Vancouver, B.C.
Filed Under: All Blog Posts, Alternative Building + Energy, Events, Localization, Networks + Organizations, Sustainability