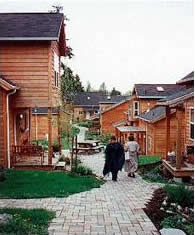 Cohousing can help residents reduce their carbon footprint and help prevent global warming according to a paper from the University College London.

Those living in cohousing consume nearly 60 per cent less energy in the home, and operate car-sharing and recycling schemes that greatly reduce the pollution from travel and landfill. Having facilities such as office space, workshops and gym within the community also reduces travel and associated emissions. Residents’ direct involvement in the management and maintenance of these communities has also led to the adoption of more energy-efficient systems and renewable sources of energy.

The paper highlights new development models for cohousing which could help it reach a much wider market and increase its impact.

In a paper published in Futures Journal, Dr Jo Williams of the UCL Bartlett School of Planning says that until recently, cohousing has occupied a niche market in the US, largely because the development model adopted has been resident-led. The time, money and effort required to invest in such a project, along with the associated risks, has very much restricted market interest. It takes a minimum of five years to develop a cohousing project, the drop-out rate is high and projects can be expensive.

However, new development models have emerged in the US that reduce resident involvement, risk and cost – namely, partnership, speculative and retrofit models. Developers are beginning to finance and build cohousing both in partnership with prospective residents and speculatively. Residents are also forming their own cohousing communities in existing neighbourhoods, by taking down fences, creating communal facilities and taking on the responsibility for general management and maintenance.

“With concerns about carbon emissions and energy savings, there has never been greater impetus for housing that offers low-carbon lifestyles. If the development models emerging in the US were adopted in the UK, the market for cohousing could be substantially expanded here. This could add to our options for shrinking our carbon footprint as well as meeting social needs, such as safe homes for an ageing population and local childcare facilities for parents who work.”

Original paper ‘Predicting an American future for cohousing’ by Jo Williams is published in the April issue of Futures Journal.