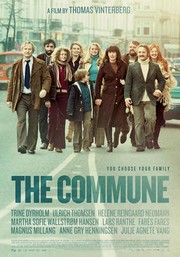 A new movie called “The Commune” follows Erik and Anna, a Danish couple living in Copenhagen in the 1970s, as they invite an assortment of friends and acquaintances to move into a home they inherited:

“We should live with fantastic people, shouldn’t we?” Anna asks her husband. He agrees to try it out, and they interview a handful of prospective candidates. A few have more experience with intentional living than others, and offer to help outline house agreements. Nearly a dozen people move in altogether.

The characters go through a series of familiar community living experiences. According to a review in The Guardian:

“They hit upon house rules, which basically means a regular meeting around the kitchen table, at which they must provide an emotional audit and say how they are ‘doing’. Important new decisions will be settled with a vote. At first, the commune is euphoric and celebrates with a group skinny dip….But the excitement can’t last…. Actually, and unexpectedly, the source of this upset comes from without rather than within.”

It’s nice to see a movie that presents an intentional community so matter-of-factly, without sensationalizing the idea of community living. Mostly, the commune serves as a backdrop for Erik and Anna’s own marital issues, as they struggle to align their vision of their relationship with their newfound experimental lifestyle.

After a while, Erik starts seeing another woman, and Anna suggest she move in too. Tensions arise, and Erik begins to assert “ownership” over the house that he agreed to share. It sounds like an interesting story!

The movie opens in the U.K. this month and will be available on DVD in the fall. Check out the trailer and let us know if you get a chance to see it!

Don’t want to wait until the fall? “Together,” a Swedish movie from 2000, also tells the story of an intentional community, and is available now on Netflix.