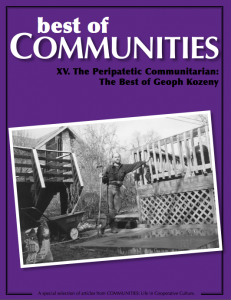 It was 10 years ago this fall, just after the FIC tribe had gathered for its semi-annual organizational meeting in Austin TX, that we received the news we dreaded, and which we knew was coming: our dear friend Geoph Kozeny had succumbed to pancreatic cancer. It was fitting that so many of us who benefitted together from his life could grieve together on the occasion his passing.

One of the inevitable consequences of an organization’s longevity is that it will eventually outlast those who built it. While there are many who have lent a hand to making the Fellowship what it is today, there have been only a handful who put in the 19 years that Geoph did. Ironically, he was among the youngest of those handful, yet he was the first to go. Such are the uncertainties of life that it can be taken from those we least suspect.

While I still miss my friend, he lives on in the collective memory of his stalwart dedication to creating community. Geoph left his adopted home in the Bay Area Jan 1, 1990, and assumed the role of nomadic community networker. Incredibly, he was still on the road when he died, almost 18 years later.

As a friend, Geoph was my alter ego, helping me to not take myself too seriously, and to discern the good intentions in others when I was irritated by their actions. He was many things: a thoughtful editor, a jack-of-all-trades around a construction project, a dab hand at stir fries, an unrepentant night owl (he didn’t do mornings), a merciless punster, a retired pig farmer, a dedicated advocate of polyamory, and an accomplished guitarist with the most amazing repertoire of goofball songs. Most of all he had a big heart and—shades of Will Rogers—he never met a person he couldn’t see the good side of. 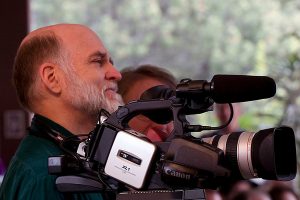 As a one-time student of architecture, we always relied on Geoph to lay out flyers, to craft the flip chart pages for FIC meetings, and to produce the signage we’d need at events. He was at the center of the production team for the Fellowship’s first two editions of Communities Directory (1990 and 1995). Most important of all, Geoph’s last decade was devoted to his magnum opus, producing Visions of Utopia: a two-volume video project that offered 3.5 hours of viewing, profiling 17 different intentional communities—a carefully selected sampling of the options extant in North American. The first volume was released in 2002 and the second came out posthumously in 2009, with 98% of the footage being shot with Geoph behind the camera.

Two years after his death, the Fellowship created the Kozeny Communitarian Award, in honor of his indomitable spirit. The Award celebrates the accomplishments of a person or organization in one or more of the following ways:

o  This Award is intended to honor a lifetime of achievement more than a single accomplishment.

o  We intend to primarily honor people who helped create community in North America, though we are open to considering candidates whose contributions were mainly made on other continents.

o  We expressly intend that the concept of “community” will be interpreted broadly and is not limited to intentional communities. It includes the concept of creating or enhancing a sense of community in any context, so long as it is genuine, lasting, and and is not accomplished through the promotion of us/them dynamics.

o  The recipient’s contributions should significantly impact people beyond the members of their home community.

Nominations are open during the first quarter of every year (Jan 1 to Aril 1), for the award that will be given the following year. See Kozeny Communitarian Award for details.

Here are those who FIC has bestowed this honor upon to date: