A new platform for communities and seekers is coming in 2020. Learn more and donate!

Tony Sirna is a former Board member, ic.org webmaster, and founding member of Dancing Rabbit Ecovillage. 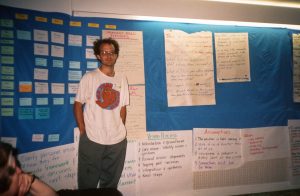 When I took over the FIC web site in 2004 it had already been an amazing resource for a decade. Similarly the Communities Directory had completed it’s third edition and sold tens of thousands of copies.  But the time had come to merge the two and bring the FIC into the world of Web 2.0.

The plan was to publish the entire Communities Directory online, for free, which was a pretty hard decision to make since the Directory had been the FIC’s “cash cow” for years, supporting much of our other efforts including Communities Magazine, Community Bookshelf, and more.

Would people still buy the cow if we gave the milk away for free? If sales volume dropped, would we even be able to pay for the costs to produce the book, much less support our other efforts?  What else might we lose if we put our flagship product online? And what would we gain?

From 2017, this choice seems obvious, but the internet was still young and everyone was struggling with these kinds of questions. In the end we made the leap and took a huge leap into online publishing.

The first step was importing data from Directory 4 and then providing intentional communities a way to update their info by filling out their questionnaire online. Thiss meant getting a notoriously luddite and skeptical group of communities to dial up via their modems and fill out the form. Hundreds of emails were sent and phone calls made. Paper versions of the questionnaire were provided and dutifully hand entered by staff.

Thus began the online Communities Directory that still to this day provides some of the most up to date and comprehensive information on intentional communities that one can find. Searchable by many factors with a dynamic map of communities worldwide, it was and is a pretty amazing resource for seekers and researchers alike.

But the online Directory did not mean the end of the print Directory. That same data was downloaded, parsed, and massaged into the 4th edition of the Communities Directory published in 2005. Luckily the new system streamlined the production process enough that despite the lower sales volume the project broke even.  And this allowed us to update the book more often with Directory 5 coming out just two years later, and Directory 6 two years after that (previously data was updated on closer to a 5 year cycle).

In the end, I think FIC got the best of both worlds – an up-to-date dynamic, data driven, searchable online Directory and a beautiful print edition, both representing the depth and breadth of the communities movement, and helping multitudes find a home in community.

Big improvements coming to ic.org in 2020We need your help to make it happen!

The movement spoke. We listened. Help bring community into the lives of thousands of more people by joining our fundraising campaign.