The Bridge to a Greener World 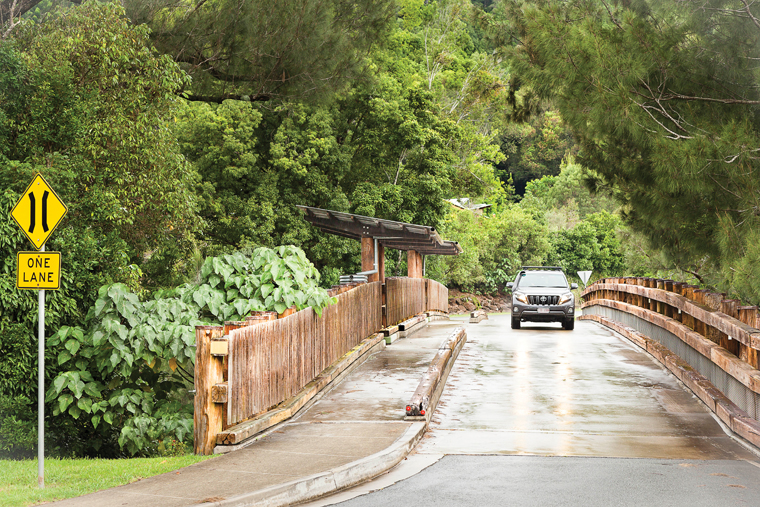 I didn’t realise my life had been hijacked until a year after it happened. I was in the car, on the way to show my mate Chris my newly built green house, reminiscing about how my wife Mandy and I had bought into the Currumbin Valley Ecovillage. “You were running late that day,” I recalled.

Chris was the Ecovillage’s developer. We had visited him a year earlier to catch up, but were also mildly curious to see the progress of his “eco thingy” project. To fill in time while waiting for him, we watched the Ecovillage’s sales video. By the time he arrived, we had earmarked a house site to buy. As I replayed this story, he was grinning, and that’s when I knew I had been hijacked. “You were never late, were you?”

But the conversation was shut down as our car swung off the Village Way roundabout and came to a jolting halt. We were on the one-lane bridge that crossed the creek running through the Ecovillage. Another vehicle was in our path, progressing forward slowly as though challenging us to a game of chicken.

“Damn,” I gasped in frustration from the passenger seat; delayed. I had come to learn the local bridge etiquette: first on, possession ruling the right of way, so we reversed back and watched as this car painstakingly crawled its way forward. “Man, this one-lane thingy can be annoying,” I blurted to driver Chris.

But he was insensitive to my time-speed-needs. Instead of taking the only sensible action, revving the engine for take-off, he slid his window down and started waving at the bridge interloper with the enthusiastic fervour of a war-time sailor hanging over the rails of a departing ship.

“What are you doing?” I hissed.

The other car promptly stopped and together with our vehicle, blocked the road. “Gidday, mate!” Pete cried back. “What’s happening?”

I groaned. Having known Chris for some years, I knew that such an open-ended question could only lead to long tales of adventure and discovery. And sure enough, he and Pete started sharing exactly what had been happening. They talked of herbicides in the gardens, snake-proof chicken coops, the local beach’s surf conditions, and the inevitable latest village controversy; this time someone had planted a non-certified banana tree in their yard. I didn’t even know there was such a thing, but “tut-tutted” appropriately, and then adopted a “say nothing” vacant stare, certain my silence would kill off this greenie discussion and we would be on our way.

However, as a newcomer to this neighbourly society, I was only beginning to learn that chats don’t end so easily in an Ecovillage. As the two men prattled on, I forlornly looked across the bridge, eager to get home. I had nothing positive to add to their discussion about protecting snakes in the community, having always adopted the “only good snake is a dead snake” approach. So for want of anything else to do, I inspected the bridge. It connected the north and south parts of the 270 acre Ecovillage by traversing the Currumbin Creek, a beautiful waterway that wound through the valley from the rainforest mountains to the ocean. Not for the first time, I noticed the slight arch in its concrete roadway.

Chris once told me that this curve was a hard-won council approved feature, a rarity in modern road design, having been modelled on old European bridges. It was one of hundreds of relaxations and features across the Ecovillage that challenged and opposed conventional development standards. Others popped into my head: no street lights, a dark sky policy, country-style laneways, centralised waste collection that keeps the big noisy garbage trucks out, no fences, and even self-imposed national park rules forbidding domestic animals.

This pet-free zone caused much frustration with potential owners who refused to part with their beloved dogs and cats; so they went elsewhere. The ethos of “nature comes first” won that point, as evidenced by the 176 identified bird species that flourish on and visit the Village land. To put that in perspective, America’s 522,000 acre Great Smoky Mountains National Park, on the border of Tennessee and North Carolina, has about 240 species.

The kangaroos also love the environmental protection zone; a roaming mob of about 120 are often found resting, boxing, or love-making in one’s front garden. Contrary to myth and tall tales, it is rare to find kangaroos in Australia’s urban areas. And as a prior city-dweller, accustomed to the comforting night-time hum of air-conditioning and distant trains, I find few noises more unsettling than that of a giant male kangaroo grunting in the dark. I shook my wife awake the first night I heard this sound, displaying my growing knowledge of all things nature. “Honey,” I whispered. “There’s an old man with asthma throwing up just outside our window.”

“You’re not getting it, are you?” Chris’s voice interrupted these thoughts, returning to my earlier delay frustration.

“Huh?” I turned, finding the other car and its chatty driver now gone.

I squinted at this non-bridge. The structure was built of beautiful recycled timber rails, posts, and supports, parts of the balustrades being old plumbing pipes. Its two viewing platforms were quintessentially Australian with reused corrugated tin roofs, timber bench seats, and metal water tanks. It hovered over the creek like its grand master, but I had only one thought. “Well if it’s not a bridge, it’s doing a damn good impression of one.”

He went on to describe how the bridge represented everything the Ecovillage was about. “It physically connects us, sure, but Ecovillages, they’re not just about sustainable design and nature. Look at what just happened,” Chis said. He explained how the “inconvenient” one lane was a deliberate design, forcing residents to stop, to have to give way, wave at each other, and yes, even block the road for a quick window-side chat about chickens and snakes. In this busy world, where we avoid neighbours and rush faster and faster to get somewhere a few seconds earlier, the bridge slows us down. Even by creating a meek hand-wave, it engenders a form of acknowledgement, respect, and communication. “The more we interact, even in small daily doses, the greater a community we will be,” he said, before closing with a statement of how the bridge was the ultimate example of the Ecovillage concept: physical design that creates a positive social outcome.

At that moment another car arrived, surging across the bridge at speed, the driver red-faced, talking on a phone and ignoring our gregarious waves. “Well, it’s not perfect,” he shrugged.

When the bridge opened it was named the “Ridgy Didge,” an Australian colloquialism that reflects authenticity and uprightness—or to layer one colloquialism on another, “fair dinkum,” a personal accolade of the highest order in Australia. But even the developers did not foresee it becoming an intrinsic part of community activities; and it all began with a spontaneous party.

There had been a string of births in the Ecovillage in one particular month, sparking accusations of unnatural fertility in the soil, followed by a call-out for icy beers and a multiple head-wetting celebration. The old dairy hall was booked, so one larrikin suggested “let’s have it on the bridge.” About 40 people turned up at sunset. One rolled his barbecue up the road and started cooking German sausages, and instantly, in addition to the babies, a tradition was born. Sure, passing cars were inconvenienced by the rowdy mob spilling across the roadway, such activity challenging the norm of course, but isn’t that what Ecovillages do?

Since then, the “Ridgy Didge” has grown as a destination that draws the community together. When Libby, a beloved early resident, was fighting a terminal illness, a sunset vigil on the bridge to support her fight attracted over a hundred people. On her later passing, the Ecovillagers met there again, throwing flowers into the running waters below and laying others around the rails; a local community marking the passing of one of their own.

By rights, I shouldn’t have even been at that event. I was a self-confessed former air-conditioning addict and lover of my 30-year-old beer fridge that ran all year even when empty. Sure the old Westinghouse sucked down enough power to run a small African village, but I remained dubious as to how my family would adjust to life without “essentials” like it and clothes dryers. I was even more wary of this “community” ideal, having spent a lifetime being conditioned to stay behind fences and studiously avoid neighbourly contact, in case they wanted something. The ongoing events on the bridge have removed these latter doubts; I am still getting used to hanging my clothes on a line.

Maybe it’s the central location within the Village which draws us to the scene. Maybe it is the pretty, natural setting, with water running, trees swaying, and clouds wafting through the open sky, which instils a peaceful karma. Whatever it is, from the first celebration party for a newborn, to the ongoing reflective ceremonies and more casual meetups, the bridge has taken on lifeblood of its own.

The last flower ceremony I attended was for my mate, Ecovillage developer Chris, who died in a freak accident in December 2013 when a shop awning collapsed on him. Hundreds of residents from up the Currumbin Valley and beyond crammed onto the bridge that day, and even though he never planned the structure for this use, I reckon he would have been looking down and tilting his head back in typical outrageous fashion and guffawing “That’s fantastic, sustainable, and community, that’s what Ecovillages are about!”

I’ve driven across the creek every day for the past seven years as I go to and from the Village; the “Ridgy Didge” truly being my bridge to a greener world. On almost every occasion I am forced to slow or stop, for cars, cyclists, kangaroos, sun-seeking snakes, kids whizzing through on skateboards, and even hopeful fisherman clinging to the rails and flicking rods back. Each unwanted “delay” is like a little injection, a daily reminder, that whatever I am speeding off to do can wait just a few seconds longer.

In January this year I drove a friend to my house, swinging my car onto the bridge, way too fast, and meeting head on with an oncoming car. I slammed on the brakes, backed up slowly, and waved at the approaching driver. My guest from the outside world huffed, “this must give you the shits having to stop all the time; why didn’t they build two bloody lanes?”

I smiled. “You’re not getting it, are you? I think you need hijacking.” I then turned away from his confused face, slid my window down, and called to the passing driver. “Gidday mate, what’s happening?”

My friend was in for a long delay.

John Ahern is the award-winning author of the travel memoir On The Road…With Kids, which tells of his family’s year-long journey across 30 countries in an old RV. He attributes that gap year, living among traveling communities, as the key inspiration for his family to move to the Ecovillage in Australia’s Currumbin Valley. See www.johnahern.co.