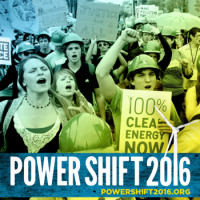 The Energy Action Coalition, the “Hub of the Youth Climate Movement,” has hosted four Power Shift convergences for young climate activists since 2007. This year, the event is expanding into four regional convergences taking place in Philadelphia, Detroit, Orlando, and the West Coast:

“Power Shift brings young climate leaders together as a movement—building the organizing skills, shared excitement, and strong relationships needed for a long-term commitment to the grassroots work that will help us realize a just, clean energy-powered future.”

This year’s theme is “Recharge”, to reflect the need for new faces and voices in the movement. The 2013 event in Pittsburgh had 7,000 participants, and organizers expect 500-1000 attendees at each of the regional events this year. According to We Are Power Shift, “people have planned campaigns, made lifelong friends, and launched their careers” at the convergence. You can read some of their first-person stories here.

Dan Cannon, a senior Greenpeace organizer, says that “the conference politicized me. It showed me what a grassroots movement was, and what it was capable of. My friends and I left inspired and motivated, but also angry. We were determined to go back and take action on our campus.”

Why should you attend or support Power Shift 2016?

Because “youth have been at the forefront of organizing major victories, from shutting down the Keystone XL pipeline to the rising tide of universities pulling their money out of fossil fuels. But there are still many more pipelines to fight, billions more dollars in university endowments tied up in shares of Exxon and BP, and countless fracking wells, coal mines, and oil refineries still poisoning communities, workers, and especially people of color.”

Check out the website to register, volunteer to be part of the organizing team, or apply for a scholarship. Early bird registration is available until June 23, and the dates of each event are posted below: