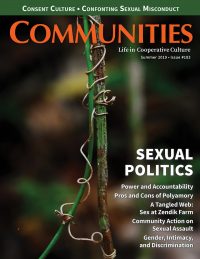 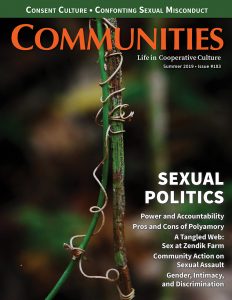 A new logo, new style, new website, and new name―the Foundation for Intentional Community―reflect the transformations within the FIC.

Notes from the Editor: Introducing this Issue By Chris Roth

Sharing the truth is not always easy, but as #MeToo has shown, breaking the silence is the first step toward healing and toward the evolution of healthier sexual politics.

In trying to undo generations of conditioning and trauma, we need to start with the mistakes, learn from them, learn how to love a little more, and try, try again.

Community Accountability: The Struggles, Challenges, and Hope for Community Action on Sexual Assault By Amanda Rain

When we think of sexual assault and boundary violations, it is common to think not in my community, or the person I know wouldn’t do that. As a result, our communities become especially vulnerable to predatory behavior.

“It wasn’t the first time someone I knew had raped me, but it was the only time I had an adequate response from my friends and community.” A rape survivor living in community recounts her story.

Sexual Misconduct in the Sphere of Power: The Nexus of Gender, Intimacy, and Discrimination By LK

An unwanted, rebuffed sexual advance from a previously trusted community leader spirals into numerous, serious consequences in the victim’s personal and professional life.

A Tangled Web: Sex at Zendik Farm By Helen Zuman

Was Wulf scheming, from the beginning, to gain sexual access to nearly every post-pubescent female on the Farm? Perhaps, perhaps not; either way, he got it. But that didn’t translate into “free love” for the rank and file.

Sex Positivity in the New Culture Movement By Crystal Farmer

New Culture offers useful tools that can create space for authentic connection, yet its cultural values can be harmful to some abuse survivors.

The Triangle of Consent By Crystal Farmer

Recognizing each other’s agency, addressing power imbalances, and communicating with honesty and clarity about sexual desires and boundaries are all essential elements of consent.

When made safe and consensual through appropriate training, structures, and support, pleasure and sex can form a solid foundation for the joyful and violence-free world we want to create.

The Sting of Discrimination: When Polyamory Is Considered a “Red Flag” By Sylvan Bonin

Previously on the path to community acceptance, an applicant experiences for the first time “the direct sting of bigotry, the shock of exclusion based on stereotypes” when her family is denied on the basis of polyamory.

Love is too strong an instinct to be dismissed, repressed, or restricted, even if it is not returned. The author recovers from a soul-crushing breakup.

Pros and Cons of Polyamory By Art

Polyamory comes with abundant advantages as well as numerous downsides; a polyamorist weighs the tradeoffs, grieves disappointment and loss, and celebrates love.

Relationships in a Community-Forming Group By Rachel Lyons

While trying to start a community with poly-friendly collaborators, two monogamous partners achieve greater clarity in their six-year relationship, and end it.

After years of dealing with love affairs and infidelity by sweeping them under the rug, a community discovers new tools, including ZEGG Forum, for members to share and grow in relationship.

A Project to “Save Love” By Sabine Lichtenfels

Instead of keeping budding infatuations secret from each other, a group decides to make them the object of their research, provoking both widespread prejudice and revelatory discoveries.

The Pronoun Dilemma By Murphy Robinson

A certain kind of trouble was brewing at Pagan Camp. The question: how do you break the divisive enchantment of the Pronoun Curse and cast the spell of the Pronoun Blessing instead?

In spite of today’s climate, lesbians and natal females still have wisdom to share, having healed in circles where the shared reality of growing up female is a source of strength.

On Community: Hold Off on Romance When New to Community! By Diana Leafe Christian

If the first thing you do after arriving in a community is to start a relationship, people will honestly wonder: how serious could you be about the community itself?

Empowered, sustainable communities are the antidote to isolation. And they are the pivotal technology that makes renewable energy, essential for reversing climate change, actually renewable.

Review: We the People By Diana Leafe Christian

This second edition is another valuable resource for those who know Sociocracy already and want to learn more.

By finding a space to exchange goods in your community, you’ll experience the wealth and connection a free store can bring.

Bodies in Isolation By Amanda Crowell

Being immersed in mainstream culture and isolated from supportive, body-positive communities can prevent choice and body-awareness exploration. But living in a supportive community can make alternative choices and attitudes easier to sustain.