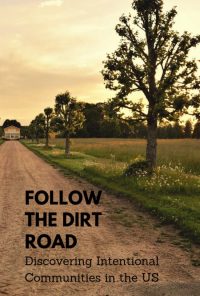 Follow the Dirt Road: A film, a ghost story and more

Back in 1989, a long-haired, tie-dyed PhD candidate and a swimsuit model & guest video jockey for MTV set out in a VW camper van to interview and document 40 intentional communities. Daniel was interviewing ic’s for his doctoral dissertation on Children in Community while Monique applied her interest in video production to produce a documentary film about the communities they visited, later to be titled Follow the Dirt Road.

Both journeys merged into one epic experience and as the journey progressed, much broader and deeper themes emerged, yielding lessons and inspirations about the power of cooperation, connection, and interdependence.

Follow the Dirt Road is available now at our Vimeo page. Rent the film for just $1.99! Or stream and download anytime for a buck more.

I took a moment recently to hear more from Daniel and Monique (see bio’s below) about their journey and this is what they had to share:

“Several months into our journey we drove to a community school in northern California … and we arrived on a Friday afternoon, which was a mistake because it wasn’t a residential community and everyone was about to leave for the weekend.  We split up so we could talk with as many staff as possible and then accepted their kind offer to park by their river for the weekend.

So, everyone left, we popped the top of our van and a bottle of organic Californian wine and we settled in for a romantic evening on our own.  Around 3 am, I came down to pee and when I climbed back up, I had this powerful, haunting feeling that there was someone else up there, lying in my spot.  I actually felt around, but I could only find Monique, so I figured it must be the wine.  I snuck back under the covers and went back to sleep.

When we woke up, I remembered and told Monique about this freaky feeling … and she went white.  What I didn’t know is a staff had told her that just a few weeks earlier, a teacher was exposed as a pedophile and tragically hung himself a few days later. Monique said she was woken up around 2:30 by this spirit who she said felt confused, guilty, and that he just wanted a second chance.  Monique said she was trying to communicate with him that we all make mistakes, but that it is important to forgive ourselves, to learn, and to move forward.   Well, this was all too trippy for the hippie.  I immediately starting packing up and we were back on the road in like five minutes.

But it gets weirder.  A few weeks and a few communes later, Monique noticed her period was late.  Looking at a calendar we realized that, if she was pregnant, we had likely conceived by that river on that fateful night.

Now, I went white.  I’m not even sure I believe in reincarnation, but just the idea of a suicidal pedophile wanting a new beginning — as our child! — kind of freaked me out.

We drove to the nearest Walmart and bought a pregnancy test.  In the parking lot, we shut our curtains, lit a candle, and said a little prayer to this spirit saying “We forgive you. We hope you are easily moving forward, but we’re just not ready to be parents.”  With trembling hands, Monique peed on the stick.  We held our breath for 3 minutes … and it was negative.

We were so relieved and we continued our journey.  I completed my Ph.D, Monique produced a video documentary on communes.  We were married a few years later — a Hindu wedding!  And looking back now, over 25 years later,  I think that eerie experience was the first time we really considered the awesome responsibility of bringing a soul into the world.

Monique is now a home-birth midwife who actually specializes in prenatal counseling and conscious conception, we live in community, I still wear tie-dye, Monique still looks great in a swimsuit, and we’re the proud parents of two — very consciously conceived — daughters, one of whom may well be the reincarnation of my grandpa, but that’s another story… “

“When we started out in 1988, there was no official directory, not to mention an actual network of intentional communities.  I gathered together as many mini-directories and contacts as I could and wrote letters (remember those?) to hundreds of communities.  And then the logistics of travel, all done by post and phone!  It is completely different and so much easier nowadays with the Communities Directory and access to email, texts and video calls!

The network has grown immensely in the past 25 years, especially with the rise of ecovillages, which I have had the pleasure of witnessing personally as President of the Global Ecovillage Network from 2015-2019.  Just this morning, we had a virtual celebration of the transfer of the Presidency with community members from all over the world!  It is amazing how heartfelt these connections through a computer monitor can be, especially when we’ve had the opportunity to meet face-to-face.

But for me, at least, it has always been about the same thing — how do we wake up to and manifest our fundamental interdependence with each other and all life.  So, while I’m passionate about intentional communities and ecovillages, I’m most drawn to the impulse behind these initiatives — to manifest our interbeingness.”

Monique Gauthier, M.Ed. has led Living Routes programs since 1998, taking students to ecovillages such as Findhorn (Scotland), Auroville (India), and Thích Nhất Hạnh’s Plum Village (France).  A graduate of the University of Minnesota and Lesley University, she has been a frequent guest lecturer at University of Massachusetts – Amherst and has led many workshops on mindfulness, conscious families, and other topics. Monique has also been a midwife in the U.S and Canada for 25 years, but more broadly considers herself to be a “cultural midwife” tending to the birth of a new leadership and holistic culture in this time of transition.

Daniel Greenberg, Ph.D. was Founding Director of Living Routes, a non-profit which ran study abroad programs based in “ecovillages” and has led student programs in Auroville since 1995. A graduate of Cornell University and the University of Minnesota, Daniel served as President of the Global Ecovillage Network from 2015-2019 and is excited to build bridges between academia and sustainable communities. He is also passionate about climate change and in 2013 founded Earth Deeds, which offers online tools for community-scale pricing of unavoidable CO2 emissions and supporting meaningful sustainability projects.

2 Replies to “Follow the Dirt Road: A film, a ghost story and more”

A few more not listed at the end of the film include: Mariposa School (Ukiah, CA), Kerista (San Francisco, CA), Glen Ivy (Corona, CA), Children of the Light (Dateland, AZ)

And there were others that were too small and/or preferred not to be listed.

Sounds great! Is there a list of the 40 communities they visited?