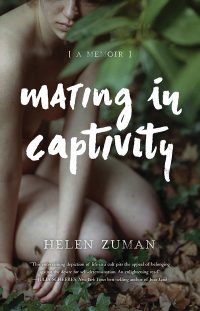 Mating in Captivity [a memoir] 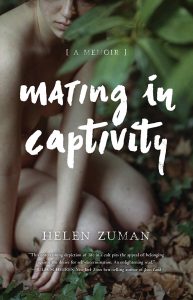 Helen Zuman’s debut book describes in detail her six-year-long involvement with a radical intentional community that also fits many people’s definition of “cult”: Zendik Farm, which started in California in 1969 and then moved en masse to Texas, then Florida, then North Carolina (where Helen joined it in 1999), and finally West Virginia (around the time of her departure in late 2004). Helen arrived soon after the death of patriarch Wulf Zendik; Wulf’s widow Arol and their daughter Swan were clearly “running the show,” as they apparently had been for a while.

Helen came to Zendik at the age of 22 via the Communities Directory (pored over in her Harvard dorm room), inspired by its promise of reconnection to the body, to physical work, to earth, to community, to authenticity. It offered a sense of revolutionary belonging—a vibrant alternative to the soul-destroying “Deathculture” of modern America. Its members—numbering 60-plus at the time of her joining—tended to develop both an emotional and physical dependence on the group (especially once they had given it all their money and possessions, as nearly always happened when they progressed into more serious commitment—“give it up or leave” was the underlying expectation). Many believed they would experience “soul death” if they left the group.

As portrayed by Zuman, life at Zendik combined, on the one hand, the opportunity to test radical ideas about relationship and to align one’s life with potentially transformative spiritual truths, with, on the other, the presence of what could easily be perceived as ongoing psychological and emotional abuse. Fear was a driving force—fear of reprimands from the leadership or others in the group, fear of humiliation or banishment, fear of life away from “the tribe.” The Zendiks helped pioneer groundbreaking experiments in the “relationship revolution,” including polyamory and non-possessiveness, and in open and honest talk about sex. Many of Wulf’s teachings seem to align with those that people today (nearly 20 years after his death and 50 years after he cofounded Zendik) still (or again) find liberating—the basis of the inner and interpersonal revolutions necessary for any effective outer transformation. While the Zendik rhetoric about the “Deathculture” often seems extreme, human civilization does appear more and more to be courting self-destruction, fulfilling the darkest aspects of the Zendik analysis of a world-gone-wrong. No wonder 20-somethings looking for a world that made sense, a “tribe,” flocked to the Zendik community—it seemed to embody a viable and deeply engaging alternative to what appeared to them as the isolating, meaningless, destructive path of mainstream American life.

Zendik leadership exerted control through a pattern of tearing down and rebuilding its members’ self-esteem—then tearing it down again, boosting it back up, knocking it back down, ad infinitum. Members went to extreme lengths to gain and maintain Arol’s fickle approval; in Helen’s words, Zendik’s hierarchy “lionized some, belittled many, and throttled dissent.” (p. 207) While the leaders (Arol and Swan) were allowed to have steady “consorts,” any other members whose relationships became too close would have their relationships broken up by the leadership’s decree, as those kinds of exclusive, committed, dyadic relationships threatened loyalty to the group as a whole.

Moreover, the law of “psychic cause and effect” hung heavy over the group, as every misfortune was seen as the result of individuals’ (or the group’s) failings. Leaders blamed a kitchen-dining room fire on a rise of “square relationships”—romantic pairings that threatened the “Zendik first” philosophy. One’s deepest intimacy must be with the whole group, not with an individual; the fire had been cosmic punishment for a lapse in that awareness. Arol also had a habit of separating children from their mothers, once she deemed the latter unfit to raise their own children.

Life at Zendik involved many opportunities for personal growth, whether it was becoming comfortable with “sex meetings,” or receiving sometimes overwhelming amounts of personal feedback, or learning how to “sell”—which is how Zendik made most of its money (other than what its members gave it—often family inheritances). Groups of Zendiks took the Farm’s merchandise, or “ammo”—self-produced music CDs, magazines, bumper stickers proclaiming “STOP BITCHING START A REVOLUTION”—to festivals, concerts, and other gatherings, and the seller’s performance (success or lack thereof in gathering money, and sometimes in recruiting new Zendiks) was often the cause of either praise or excoriation upon their return home. Selling, too, was subject to the laws of psychic cause and effect. Those who truly believed in Zendik as the only place modeling the right way to be—the one tribe in which they belonged, and the one capable of outliving and transforming the “Deathculture”—would be able to translate that absolute belief in Zendik into sales/donations. Those who couldn’t raise money were seen to be coming up short in their inner devotion or belief, and needed to redeem themselves or face grounding from selling trips (and/or possibly expulsion from the tribe itself). Other intentional communities could not measure up to what Zendik was doing—“Escapist hippie bullshit” is how one of Helen’s lovers described East Wind, where he had lived for a few years. No other community got kinder treatment; Zendik was the only Real Deal.’

Helen herself went through major changes and internal revolutions during the years she recounts. She entered Zendik as a virgin, uncomfortable and fearful in her own body, having felt increasingly detached from the world around her and ready to embrace a deep immersion in true experience and connection. She dove into life in a community where no subject of conversation, no matter how personal, was off-limits (although questioning the group’s underlying assumptions and power structures was taboo); she struggled through hookups and breakups (some voluntary, some group-dictated), lost sight of her power, regained her power, left the group, returned to the group, went through conflicts and reconciliations, eventually liberated herself, and (spoiler alert) ended up married to someone she met while rebuilding her life after Zendik. Her tale is one of accelerated personal growth in a community context; there is no question that the person whom Zendik “spits out” at the end has been transformed, much more capable of manifesting her calling in life than the person who entered, despite and because of all the trials she has endured.

Helen is a riveting storyteller. This book, “sewn…from the frayed cloth of memory” (a remarkable achievement, considering its often journal-like detail and clarity) records her experiences, thoughts, and feelings throughout her Zendik years—interactions that reveal the nature of the group she was part of, but without the intrusion of constant analysis. The reader is immersed in her experience the same way she was, with the same questions—is this a disempowering cult? a unique opportunity to create social revolution? an unmatched opportunity for personal growth and transformation? none or all of these?—and the same shifting perspectives on the answers that Helen experienced. Only at the end do we learn her own ultimate conclusions, which are, essentially, that both can be true—an experience can be terrible and growthful at the same time.

By 2005, she had started describing Zendik as a cult, which helped her wrestle out from under its shadow. By 2017, her take has become more nuanced: “All groups fall along a continuum, from reverence to contempt for self-trust. I find no bright line dividing cult from culture—just stories jointly held, and questions invited or forced by crisis…” (p. 215)

And, after detailing the demise of Zendik Farm in the epilogue (the group dissolved in 2013, less than a year after Arol’s death), Helen notes, “I count a number of ex-Zendiks among my dearest friends. Vining through the ruins, human ties remain.” (p. 225)

I asked my friend Lawrence Siskind—who spent two years at Zendik Farm, leaving just months before Helen arrived (see his article “Relationships in the Crucible,” Communities #118, Summer 2003, pp. 40-42)—for his take on the book. After completing it in just a few days, he described it as a “compelling read” and said he concurred with “so much” in it; nothing in it rang untrue. The interpersonal dynamics Helen described all struck him as familiar, though he himself had managed to avoid being the brunt of as much “bullying” as Helen endured, likely partly because he’d found himself in a more advantageous position in the organizational hierarchy of relationships.

Was Zendik a cult, in his opinion? He was often asked that question on selling trips, and would always answer “yes—a good cult.” Despite a post-residency money dispute with the group, he continues to believe that his experience there was beneficial in his own life, as it clearly was in Helen’s—even as it was essential that each of them leave to continue their journeys. Lawrence admitted not believing in Wulf’s philosophy, nor hating the “Deathculture,” nor liking Zendik writings, art, or music (Helen had appreciated at least some of the writing, though she too disliked the music). But he loved the people there, loved living in that community, joining with “amazing people doing incredible things” in the interpersonal realm, giving and receiving feedback relentlessly. He says he has never seen that level of honesty within a daily lived culture—neither before nor since.

Although Arol was clearly a “bully”—one who usually didn’t have to face feedback on her own behavior, because of her place in the hierarchy—she was also a preternaturally insightful person whose input helped others grow. She would “call bullshit when she saw bullshit,” giving the kind of incisive feedback that we usually protect ourselves and each other from. “Everyone who stuck around hugely valued the experience and her insights,” according to Lawrence. “If someone couldn’t take Arol’s input, they would leave, usually within a few months.” Those who stayed knew that they had to deal with input they didn’t want to hear (but that nevertheless often proved helpful), from Arol and from others—there are “not many places in society where you can get that.”

In Lawrence’s view, it is easy to dismiss a group as a “cult,” but there is usually much more to the story—it’s a label that shuts down curiosity and the capacity for understanding how the “cultish” group could actually have been beneficial to many people. “Zendik was good for me,” Lawrence says. Helen would probably agree in her case too—it’s an experience that liberated her from her old self and helped her become who she is today.

The communities movement would benefit from many more memoirs of this caliber—especially ones coming from communities with healthier power dynamics than Zendik. Even in light of the shortcomings of the group which spawned it, Helen’s book can serve as an inspiration to future writers (whether of full-length books or of articles for this magazine) of what is possible in writing about intentional community life.

Chris Roth has detailed his own quasi-cult-like experiences in “Power and Disempowerment on the Ecobus” (Communities #148) and “More Sustainable Than Thou” (Communities #115).