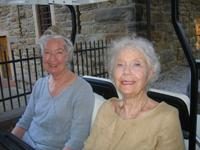 Jane Blaffer Owen
April 18, 1915- June 21, 2010
New Harmony, Indiana
On her 86th birthday nine years ago, William Lee Pryor wrote a poem for Jane Owen. It was printed in the program of her memorial service early this summer, and includes the following lines:

Like Faust, you dream, create—grow and give.
Again, like Faust, you are serene and near-fulfilled yet not complete;
there are visions still to come,
more deeds to be performed.

The Fates weave on, no end in sight.
You stay the rendezvous with night—
nowhere near, with the vigor of
your dance: a love affair with Life!

Jane Owen never “settled in” to a comfortable, self-centered old age, but continued to dream, create, grow, and give. Fortunately, she “stayed the rendezvous with night” long enough so that I could finally meet her during her 94th year, thanks to a mutual friend who had long been her admirer and had been eager for us to meet. “You’d better hurry,” he warned me presciently last year: “She’s in her 90s!” I suspect it was not through mere coincidence that, soon thereafter, I was invited to present a program in the Episcopal church in New Harmony, Indiana, where “Lady Jane” (as our mutual friend calls her) makes her home part of the year.

New Harmony is the former site of not one, but two, historic intentional communities. During my long weekend visit, Jane ferried me around town in her golf cart, an efficient and preferred means of local transportation for residents of the present-day town of New Harmony. She showed me buildings similar to those of the first settlers: the Harmonists, German pietists who settled here beside the Wabash River with their leader George Rapp in 1814 in order to prepare for what they expected would be the imminent end of the world.

As the end of time failed to arrive and the Harmonist community dwindled, in 1824 their land was purchased by social reformer Robert Owen, a visionary of a different stripe: he brought with him to New Harmony a utopian community of “Owenites” for whom the life of the mind was paramount, and philosophers and scientists flocked to the community. Jane’s late husband was a descendent of Robert Owen, and the couple had traveled there often from their home in Houston, Texas, where he was making money in oil—which would prove fortunate for New Harmony’s future well-being.

When Jane was widowed, she set to work dispersing her wealth on behalf of the town she loved so well. Historic buildings were restored, new buildings commissioned from outstanding architects, and various works of art chosen and lovingly placed. As I strolled—or rode with Jane in her golf cart—around New Harmony, I discovered that we couldn’t go far without spotting something beautiful. It might even be alive: of note was the elegant white swan gliding in a lake next to the New Harmony Conference Center. I learned that the swan was a gift from Jane, but never did get around to asking her where she bought it. The only person I know of who “owns” swans is the Queen of England, who, I once learned, is the keeper of all the swans on the Thames River. I wouldn’t have put it past Jane to have made a deal with her. On our route were two labyrinths for walking meditation (one of Harmonist design, and the other a replica of the labyrinth at Chartres Cathedral), and New Harmony’s famous “roofless church,” an outdoor worship space designed by Phillip Johnson (Jane wanted a church “with only the sky for a roof”), with a bubbling fountain as a baptismal font and a striking abstract bronze sculpture of the Annunciation by Jacques Lipchitz that I recognized as a twin of one on the Scottish island of Iona. (Jane told me that it was actually one of triplets, for there is one also in Assisi.)

As I spent time with Jane, I began to appreciate more and more her “place” at New Harmony. She was certainly the community elder, and didn’t pretend otherwise. When I met her granddaughter, I discovered the origin of the word boldly painted on the front of her golf cart, lest someone else mistake it for their own. It was “Gammy.” She was so thoroughly “Gammy,” in fact, that after that I soon found myself calling her by that name! She was indeed New Harmony’s “Gammy,” caring for the community by nurturing it with the gifts she had, like any affectionate grandparent. Jane’s gifts included not only her wealth but her intelligence, appreciation of beauty, zest for life, and extremely good taste, and the town of New Harmony will forever bear her mark. It owes not only its beauty but its allure as the site of a historic utopian community to her, as well.

As I thought about the place of elders in community, I’ve reflected that, although we are not all blessed with monetary wealth, we all do have gifts that accumulate over the years: life experience, wisdom, and, perhaps most of all, joy in being alive, which we are likely to take less and less for granted as our “rendezvous with night” gets nearer and nearer. I hope that, as I myself move more and more into elderhood, I’ll remember to use my own gifts, whatever they are, to nurture my “community,” whether it be immediate family, my neighborhood, my circle of friends near and far, or the community that is the small college town in which my husband and I have chosen to live. I hope I will remember that keeping my gifts to myself is not life-giving: it is giving them away that creates a youthful zest for life like Jane’s.

Behind the New Harmony Conference Center’s restaurant, The Red Geranium, a path meanders through a grove of tall pines. At my feet as I walked along it were rocks engraved with the sayings of theologian Paul Tillich (with whom Jane had once studied at Union Theological Seminary in New York City) about the sacredness of our relationship with the natural world, such as “Man and nature belong together in their tragedy and in their salvation.” At the end of the path is a bust of Tillich. As I approached, a small bird, startled by my presence, fluttered out of the back of his head! Curious, I tiptoed around the bust. Sure enough, the skull was hollow, a perfect size for a nest—and inside was a nest, baby birds and all.

What a metaphor to take home with me: we ourselves make room for the next generations through making space by “emptying” ourselves, sharing what is within us—all those functions of our brains, like our intelligence, our imagination, and our passions. Generosity, in other words, begets generativity. Jane not only believed that; she lived it. Among the things she shared was her own knowledge of the healing power of nature’s beauty. One more story…

During my final dinner with Jane, her daughter, and her granddaughter Sarah, her daughter’s cell-phone rang. It brought them the sad news of the death of their beloved dog. It was devastating for the little girl. Gamma swung into action after dinner. She herded the three of us into her golf cart and set forth towards the town’s outskirts, finally turning down a rough road that took us into a very dark woods. When Jane had arrived at the place she was looking for, we came to a stop. Beside us, among the trees, the air was alive with the twinkling of literally hundreds of fireflies. I have never seen such a display. As we sat there in silence, Sarah’s sobs became less and less violent, and finally ceased. Calm descended over all of us.

Without the elder wisdom of Jane, the two other adult passengers might have tried to comfort Sarah through talking and reasoning with her. But Gamma set the tone. She had lived long enough to know that sometimes life’s events cannot be dealt with in words. Instead, she let the natural world speak to us, in the universal language of beauty, of nature’s community. I hope I always remember that moment, when a community elder was wise enough to allow another species, in a place called New Harmony, to speak comfort to four people, spanning human age from a child to a nonagenerian, sitting quietly together in a golf cart, in awe.

Filed Under: All Blog Posts, Communities Articles, Community Where You Are, Issue 149