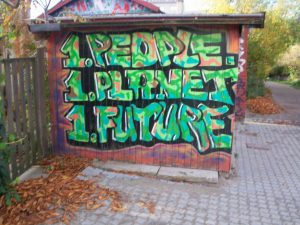 Sky Blue is the Executive Director of the Foundation for Intentional Community.  For more 30th blog posts click here.

It’s been quite a year. From the rise of white nationalism, to hurricanes and fires, to threats of nuclear war, to NFL protests, and a seemingly endless stream of high profile sexual assault and harassment cases, disruption is becoming the new normal. The sense of urgency and imperative to directly address the existential threat we are creating for ourselves is palpable and growing.

People have been sounding the alarm for a long time. Intentional communities (ICs) are definitely part of that crowd, and ICs in themselves are a response to our escalating global crisis. They are based on a radical critique of society and the notion that we can do better. As the Foundation for Intentional Community celebrates its 30th birthday, we’re taking some time to celebrate how far the Communities Movement has come and where we’re heading.

This is the first of what will become 30 blog posts over 30 days reflecting on where the FIC has been over its 30 year existence, and where we’re heading. 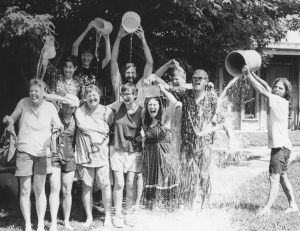 The term intentional community was coined in the 1940’s, as a way to identify the idealistic social activism that some groups (at the time referred to as Cooperative Communities) embodied. Many early intentional communities were openly opposed to war, segregation, classism, and valued environmental conservationism. There was a decided shift in tone and approach with the counterculture revolution and back to the land movement. While the critical analysis and desire to model something better was still a driving force, escapism was prevalent, and the movement unintentionally marginalized itself. And while many 60’s communes failed, some succeeded, and others joined the fray. Then in 1986, the Foundation for Intentional Community was re-formed from a dormant predecessor organization dating back to 1949. The people who founded the FIC recognized that it was time for intentional community to become more available and have a greater impact on society.

Things have changed a lot in the last 30 years. The internet, for one thing. And many allied movements, such as worker co-ops, permaculture, Transition Towns, and more, have developed in parallel, and the FIC finds itself in good company, particularly as a member of the New Economy Coalition.

Two years ago the FIC officially adopted cooperation, sustainability, and social justice as core values for the organization. This was a big step. The FIC had always made great efforts to be “ekuminical”, providing a welcoming space for intentional communities of all kinds to engage and benefit, as long as they did not advocate violence or restrict their members ability to leave the community or contact people outside of it. We recognize that while not all communities listed in the Directory or in other ways provide content or information through our programs share our organizational values, we decided that we needed to take a stand.

Holding the values of cooperation, sustainability, and social justice gives us a lens through which to view the movement and express why it matters to the rest of the world. And it creates a spotlight we can focus on groups that we believe are making a difference in addressing the world’s problems. In that respect, we are getting back to the roots of what intentional communities are about.

Why do intentional communities matter?

I ask myself this question a lot, because I figure I better have a good answer if anyone asks me (which they do). To be clear, I don’t start from the assumption that they do. I believe in ICs, so I’m biased to think that they do. But I want to keep bringing a critical, constructive, creative eye to what ICs are doing and the impact the movement has on the world. 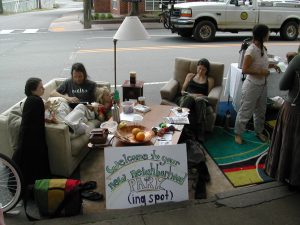 And the world’s got problems. I believe that each and every one of us have a responsibility as global citizens to do what we can to solve them. For intentional communities, this means recognizing that creating nice places to live, mini-enclaves where we can shelter away from mainstream society, is not enough. We need to become part of mainstream society and help in the process of fundamentally restructuring it based on cooperation, sustainability/regeneration, and social justice.

Creating a sustainable, self-sufficient community, as many people dream of, is not enough if the world around you is unsustainable. While ICs will always represent opportunities to live our values and benefit from them right now, more and more people recognize that we need global transformation under the same values. We are killing each other and making the planet unlivable for our species. Our lives are at stake.

What are intentional communities about?

Many communities embody the key values that the FIC has adopted, showing the world why these things are important:

Being living laboratories for these values and principles, developing demonstrable models for how this can look, this is the work intentional communities have been doing for at least 70 years.

So, where do we go from here?

From a larger movement perspective, there are a few things. If we want to meaningfully address the problems facing humanity we need to recognize the injustice that’s at play and look to those who are most affected by those problems as leaders in figuring out what the solutions are. For those of us with privilege, we need to use that privilege to help make sure the resources needed to not only survive but thrive are available to all people. Every step along the way we have to examine how privilege and oppression play out along lines of race, class, gender, and more, internally, interpersonally, in our communities, and systemically.

Folks from the People Of Color Sustainable Housing Network have been expressing the idea of moving beyond diversity to liberation, and Ed Whitfield from the New Economy Coalition and Fund For Democratic Communities has talked about moving beyond rights to power. ICs have the potential be powerful vehicles for this. 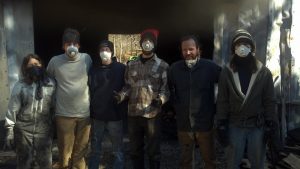 In general, I think we want to be encouraging groups to think of themselves as part of a movement and get them thinking about how they can support that movement.

On a related note, community businesses and entrepreneurship are something most ICs neglect. We only have to look as far as the worker co-op movement to see the value in developing democratically owned and controlled businesses, and learn from their experience.

Finally, for the FIC as an organization, we’re identifying key programs we should be developing for maximum benefit to growing the movement. Taking the Communities Directory to the next level is key in this. We’re developing a plan to build a full blown matchmaking system for individuals and communities, in addition to overhauling the user interface.

We want to develop a consultancy and education program. There’s so much experience, wisdom, and expertise available in this movement, and there are lots of ways we can gather and disseminate that. We already do this through Communities magazine, certain books we offer through Community Bookstore, and with our new webinar series. There are other passive resources available on ic.org, but there are so many other proactive programs and services we could be offering to support new and struggling groups. 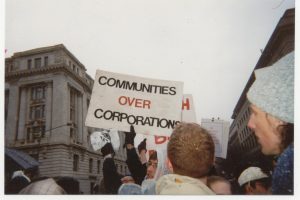 The other huge issue for forming groups is money, i.e. getting together enough of it to buy and/or develop land and buildings to create ICs. The central question here is, how do we help connect groups to land or the money to access land? This is a question we need to answer.

World at a crossroads

made me relearn muh password to jus say great! yes.