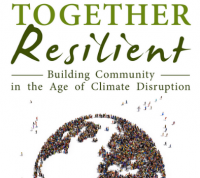 This post is an excerpt from Together Resilient: Building Community in the Age of Climate Disruption by Ma’ikwe Ludwig, published by The Foundation for Intentional Community. Visit our fundraising campaign to learn how you can support the publication of the book and get yourself a copy!

The appeal and potential of intentional communities lies largely in one of their fundamental characteristics: they are basically miniature social laboratories where we can try stuff out that is different—sometimes radically different—than the mainstream. Over the history of the communities movement, these social laboratories have been used to develop and/or hone a wide range of interesting tools. I have hopes that this inherent trait of communities can be leveraged ever more powerfully for engaging in what many have appropriately named “de-growth”–moving from a paradigm of perpetual growth and high consumerism to a cultural norm of lifestyles that dwell within the natural (and implacably firm) limits of the planet.

“For social scientists, these ‘utopian’ communities serve as natural laboratories where deliberate design for sustainability is the starting point, and where ongoing attention to resource use and effective environmental stewardship shape the cultural context for human behavior, as manifested in explicitly stated community norms, rules, and ritual activities. Collaboration and engagement on the part of scholar-activists allow our skills of critical analysis and our desire to identify what does and does not work in the transition to resilient, sustainable societies to converge in synergistic ways with the interests of those we study.” (1)

Having social scientists to document what we do is great because that adds legitimacy to the communities movement and provides us with information that helps us to be diligent about making sure what we are doing really is better. And yet intentional communities, it turns out, are very good at innovation, whether anyone is paying attention or not.

Examples range from the start of Habitat for Humanity (2) to car sharing (3) to polyamory (4) to consensus decision-making (5) to lesser known but still potent examples like Feedback Learning (6) and the ZEGG Forum (7). There are also numerous examples of natural building techniques that were developed and studied in a community context (think Earthships) and then those examples were later used to help change laws in places with more restrictive building codes, opening the door for wider dissemination of these techniques. All of these, in fact, are examples of things pioneered in the “safe bubble” of intentional communities before spreading out to wider cultural contexts (8).

So, communities incubate a lot of interesting stuff. And the truth is that every intentional community is experimental to some extent: all communities in the US are attempting something cooperative within the context of a highly competitive culture. So community is always doing something different, something with no well-worn paths to follow, and that generally leads to it being a highly creative environment.

While that can be daunting, it is also very exciting. Trying out new stuff is not only encouraged, it is also essential to at least some extent, to create the fabric of real community in America today. Sure, some groups are a more radical departure from the mainstream (and therefore have a greater need for creativity), but all of them afford an opportunity for reinvention that is very much in line with Klein’s imperative for making a new, post-carbon world.

This makes community a powerful place to be as the world is changing around us, and demanding we change, too. Banding together to navigate those changes means both amplifying our individual creativity, (increasing our chances of bringing into being a viable new world in the process) while simultaneously offering a significantly safer haven to operate from as the world changes around us.

There’s another reason why community is a powerful tool for working on climate change: peer pressure. George Marshall has a fascinating chapter in his book (9) on why we aren’t dealing with climate change called The Jury of Our Peers. In it, he details a whole host of ways in which the inaction of those around us leads to us being less likely to act ourselves, regardless of what we personally believe to be right or feel moved to do, and regardless of the urgency of what is in front of us.

The opposite it true as well: make it cool to take climate change seriously, surround yourself with people who are acting, and you are far more likely to act. Community is an activist tool because of psychology, not only because of economies of scale. We are not only more powerful together—we can also be more aligned with our values when we surround ourselves with others who will be a positive force in keeping us honest.

1 Dr. Lockyer is at Arkansas Tech University. Quote from a forthcoming article in the Journal of Political Ecology.

2 This model was pioneered in Koinania Community in Georgia, founded in 1942 as the first fully racially integrated town in the US.

3 Done by many income sharing communities before it became popularized by urban programs like Zip Car.

4 This term was coined by members of Kerista Community in California to describe integrity- and communication-based relationships with multiple partners, and to distinguish this practice from simply sleeping around or “swinging”.

5 Developed first by a number of Indigenous tribes, and also by the Quakers (both of whom could be seen as intentional communities, or not, depending on your definition) and then spread widely through both the intentional communities and radical activist movements where a more secularized version of consensus now flourishes.

6 Developed by Ganas Community on Staten Island in New York, this method is about helping people learn to give and receive accurate, non-dramatic feedback and work through the common emotional reactivity in that process.

7 A type of witnessed issues processing work that is often likened to “psycho drama” for its use of acting out parts of our own psyche for the purpose of psychological growth and healing.

8 There are also more amusing examples, that have spread a lot further: the sugar waffle ice cream cone and automatic bowling pin reset are both inventions claimed by Mary’s City of David, a community in Benton Harbor, Michigan. This community also once played an exhibition baseball game against the Globe Trotters, and is the third oldest Christian community in the US, according to their website. If the creativity of just one intentional community can produce this range of wonders, surely a whole movement of us can make a dent in this climate thing.

9 Don’t Even Think About It: Why Our Brains Are Wired to Ignore Climate Change, by George Marshall. Published 2018 by Bloombury Publishers.

Like this excerpt? Visit our crowdfunding campaign to get your copy of Together Resilient before the book’s official release date!