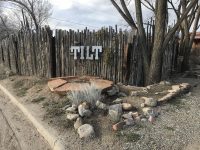 In community, On the road – Dispatch #7 – Taos Initiative for Life Together

“As Christians we have to atone and reconcile the atrocities done in the name of God.” That was Todd Wynward, during his 2 minutes in the intro go-round of the first Southwest Inter-Community Summit. I’d been kind of tuned out when he started talking, but that got my attention. I need to talk to that guy.

Todd is a Mennonite minister, wilderness guide, and follower of the Watershed Way. He and his wife Peg Bartlett founded and run the Taos Initiative for Life Together, in Taos, NM. The purpose of TiLT is to demonstrate as Christian faith-based people how to live in a way that embodies “creative cultural resistance, transformative economics, watershed discipleship, high-desert homesteading, innovative education and shared community practices to reimagine the ‘good life’ in America.”

Todd authored Rewilding the Way, which explores an interpretation of Christian principles that leads us back to integration with nature, challenges our inculturation into imperialist, consumerist civilization, and solve injustice and ecological destruction through community organizing and action.

Todd and Peg are part of a diverse and extended community of activists and organizers in Taos working to build resilience, heal and reconcile the complex history of colonalism and imperialism, first by the Spanish, then Mexico, then the US, including a high number of counter-cultural folks and spiritual seekers over the last several decades.

There’s a lot going on in Taos. Right after I arrived, a First Nations man named Buck Johnson came down from 4 days on top of a drill for an exploratory well. It was a non-violent direct action supported by the Taos Water Protectors that stalled the drilling to create a media opportunity to address the problems with the water agreements in the region. From what I was told, Taos Water Protectors is led by a diverse group of people, many of them young people, and that part of the genesis for this was people from Taos working together at Standing Rock. 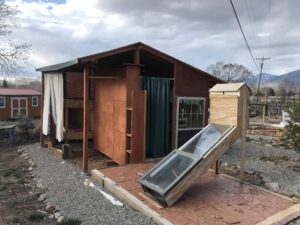 I also spent time in Taos with my friend Megan, former resident of Lama Foundation and coordinator for last year’s Southwest Inter-Community Retreat. She talked about the work she’s been doing lately leading a group of white people addressing white privilege, using a curriculum from the Healing & Reconciliation Institute, and with oversight from local BIPOC activists. This kind of work is happening more and more all over the place, which I find encouraging.

Todd was one of several radical Christians that I’ve come into contact with over the last year, the others being Canticle Farm in Oakland, CA, which I got to visit last Fall, and more recently my visit to Koinonia Farm in southeast Georgia. The early intentional communities movement of the 40’s and 50’s was highly influenced by Quakers and Bruderhoff, but this diminished over time, and there’s been a more pronounced, though by no means complete split between religious and secular intentional communities over the last several decades.

It seems like there’s a new convergence of religious and secular groups that hold the same values and are able to comfortably hold differences in belief. This feels like a new and important development, like everyone did a lot of throwing out babies with bathwater, and now it’s time to bring it back together to help the world see a different vision for humanity living in peaceful, sustainable community.

One Reply to “In community, On the road – Dispatch #7 – Taos Initiative for Life Together”

Todd is one inspiring fellow! I met him (and you) at recent Arcosanti Convergence. I bought several copies of his book(s) and have been sharing it with folks in my area. I agree and love your sentiment at the end of this article about the merging of secular and religious groups in service of peaceful sustainable community. Well said. He is a prime example of that blending work. It is nice to hear from your travels, something I wish I could do but have other matters more domestic and stationary to tend to at this hour. Enjoy your journey!