In community, On the road – Dispatch #8 – Arcosanti

I got a little out of order, but to wrap up my first cross-country tour I wanted to share a little about Arcosanti. I only stayed there a night on my way from Taos to San Diego, but I’ve helped host a couple gatherings there the last two years and I really enjoy the place. It was kind of just a convenient layover at a community I really like, but I also had an agenda.

Last year the group of us in the GENNA Alliance who organized the Regenerative CoLab also played a small support role in the Arcosanti Convergence, particularly around promotion and content curation. Since then I’ve been talking with the main coordinator for the Convergence, SeanPaul, about getting more involved with Convergence this year, which will be October 11 – 13. My early win is getting tentative agreement from Climbing Poetree to come perform and speak. Looking forward to sharing about this as it progresses! 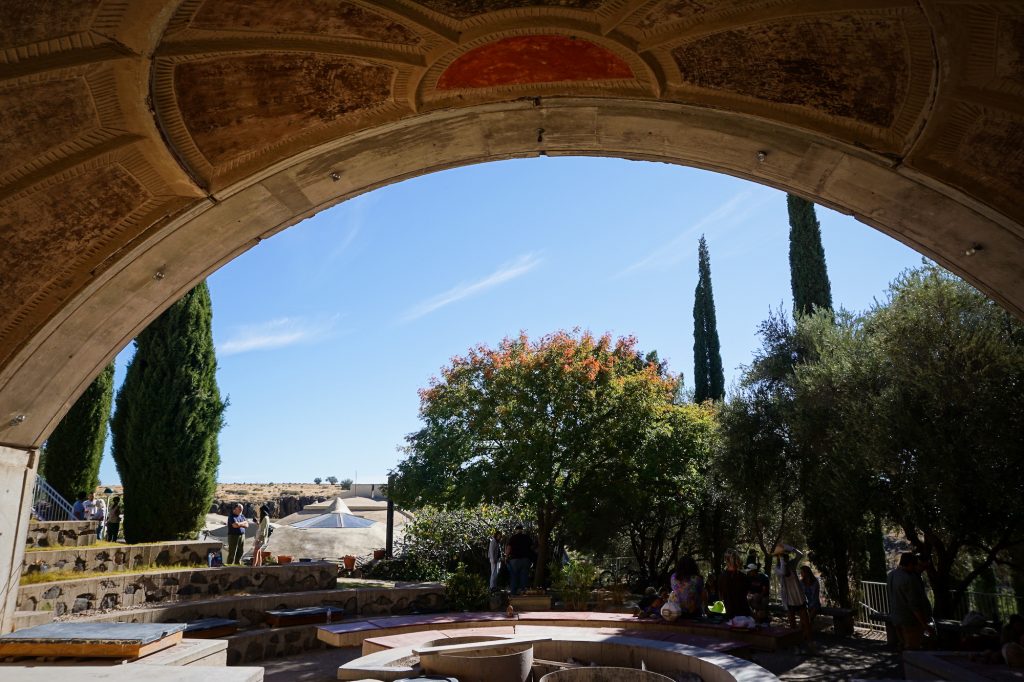 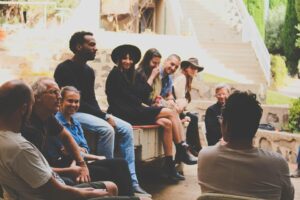 Before visiting Arcosanti I didn’t know that concrete could feel warm. I mostly mean that metaphorically, but there’s also some thermal mass potential. Arcosanti is mostly built of concrete. Rounded, sculpted concrete, incredible architecture, and compliments the natural environment. It just feels good being there. Check out their explanation of the concept of Arcology and learn about Arcosanti’s more than 50 year history.

It’s been interesting connecting with folks at Arcosanti, in part because I’ve heard a number of current or ex-residents say, somewhat adamantly, that they’re not an intentional community. I’ve heard others express a sentiment along the lines of, well, if it walks like a duck and quacks like a duck….

The resistance to the term is challenging because it makes my job a little harder, but I also really appreciate it from the perspective of looking past concepts and terminology to the patterns and dynamics that tend to run through most if not all groups, and identify the core characteristics that create a similar experience even if the form seems very different.

I also understand the resistance from an identify and expectation management perspective. Some of what I heard from folks there is that some people who came thinking Arcosanti was an “intentional community” and were then disappointed to find out things didn’t match their expectations. These also weren’t the kinds of people that Arcosanti was very interested in either. Obviously you want to attract people who are going to be a good fit, for them and the group, and you want to make sure you’re communicating in a way that encourages that. 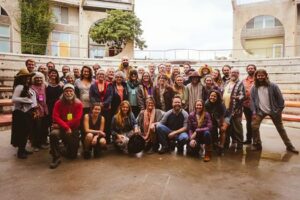 But for me, working for the FIC, the work is to try to broaden both the movement’s conception, as well as the public awareness and perception, of what an “intentional community” can be. To be honest, I don’t particularly like the term. But it is in common enough use that we’d only want to change it to something we knew would fit better for more people. I’ve asked a lot of people for other ideas, and no one has been able to come up with anything they thought would be better.

When it gets down to it, I don’t care what we call it, I just want us all to be able to learn from each other and find ways to be mutually supportive. Whatever tools will help us, or whatever tools aren’t serving us anymore, let’s figure out together what works.

One Reply to “In community, On the road – Dispatch #8 – Arcosanti”

Sky, good contrast between Arcosanti and the for Democracy Network in Oakland, in terms of upfront self-identification, “concepts & terminology”, huh? Good point about the “identify and expectation management perspective” too 🙂

I think with the progression in the times andor this revoluntaire-connecting internet, communities can tend to form less in-the-moment (organic?) and more… intentionally, or with much deliberation, as if choosing how to write a college final essay… or important text… etc. 🙂 hahaha

I’ve messaged the FIC editor about it almost a year ago, and I’ll say again, that this video (that may seem to be against intentional communities at first look) is a nice, honest perspective on intentional communities that may be helpful (especially to broaden our perspective), for seekers of community especially, to consider – “Why We Don’t Believe in Intentional Community” on YT Fouch Family Off Grid (https://youtu.be/RUimlL9a1ng).

There is a force or power in knowing (what/if community is right for an individual) with language (words, beliefs, ids, values, expectations, explicit agreements etc.) too, but also there is a very real feeling of knowing simply in the right place and time withOUT needing language – as I remember clearly from WCCC in 2015 (which could be for the better or for the worse, right?). I understand some people describe this as “following your heart” ?