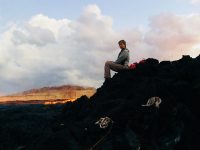 Growing Together through Trauma, with the Land 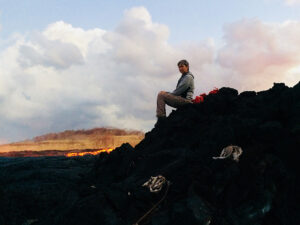 Land creates a place of hopes and dreams. It is also the dirt, the more solid space beneath the sky upon which we walk and build our houses, and in which we grow our food. In a recent disaster experience I found out the land was a much larger source of “glue” to keep us together than I thought. The land was not only a place to be together, but also a foundation for the stability of our social experiment. Our community members use Nonviolent Communication (NVC), co-counseling, and a variety of other communication and personal growth tools to maintain harmony within the group. Yet when our needs for safety and security on the land upon which we live were under question our foundation was shaken, the structure of our intentional community nearly collapsed, and the reinforcement procedures have been challenging and enlightening reflections on human behavior.

On May 4th, 2018 a large 6.9 quake stirred the ground and the emotions of residents at La’akea Community in the district of Puna on the Big Island of Hawaii. Many of us were on the La’akea front porch as the ground pitched and rolled. A few ran away from the house, feeling more secure on the land. I held onto the post in the middle of the porch. My daughter and one of our members were at the Pahoa Island Naturals Grocery Store as glass bottles and many other things began falling off the shelves. They hurried home. For us this signaled the beginning of our Lavaland summer adventure. As the days progressed, cracks located a little over two miles downhill began spewing lava and evacuations began.

At first we appreciated our elevated distance as our air quality was excellent, sunshine glorious, the land abundant with food filling our food safe and refrigerator. The lava was staying further than two miles away, we had two evacuation routes, and civil defense was kindly—especially once presented with leis and homemade cookies! Roadblocks had been set up to limit traffic flow in and out of the lava zone. Placards were necessary to travel the roads; proof that you lived in the area required. There were no highway noises. The helicopters were extensive but the peace was relaxing and very welcome as we were in this chaotic mind state of “what’s going to happen next.”

I had a 4 a.m. realization that though I consciously bought into a property on the rift zone with six others in 2005, I had never fully grokked (embodied the understanding) of what that meant. Major lava eruptions had occurred four years ago, 30 years ago, and 50 years ago. The likelihood of more was very, very high (and still is). I thought I was in for the ride. We are a permaculture community. What do you do when the going gets tough? You stick together, live off the land, and rough it.

Maybe not. On May 7th I left the land to drive my daughter to her school carpool meet-up. When I attempted to return the road block guards would not let me back in. New cracks had shown up. The order had come through—no one allowed in the zone. I went on an emotional roller coaster. I tried NVC, I tried radical honesty, I tried crying, yelling, reasoning; nothing worked. The guards would not let me back down the road to my community. My peeps were behind the lines, my home, my community, my life. I felt completely alone. This emotional chaos was happening all over Puna as it has happened all around the world and continues to happen more and more with the increasing number of natural disasters.

That same day Biko, Ruben, Aniko, and Kai left the land. We fled in different directions. Some of us went back to the land only to be evacuated with a siren escort by the end of the week. I’ve never lived in such uncertainty. The stress levels were extremely high. During one day in Pahoa I saw two physical fights break out—something I hadn’t seen in more than a decade of living here. It became clear to me that it was time to leave the area. So Ai’ala and I left. We were gone two months. During this time Prasad, Ananda, and Tamara mostly stayed on the land. Biko and JJ came and went at various times.

Here’s a quote from Ananda expressing herself during the time of the flow as she inhabited the land. “We live in the moment, with a respirator on hand and all necessities packed in the car so can leave at a moment’s notice. Madame Pele is the best teacher of living in the moment that I’ve ever had! (Note to self…Be Still and Breathe…)”

The lava was in full swing through July. At La’akea the Pele’s hair was everywhere. The three on the land got the glass splinters in their feet and hands and needed to be cautious to protect their eyes and lungs. An ominous black cloud hung above La’akea. The sky was dark, the generator ran every day, and it rained and rained below the black cloud. The eastern skyline was red as the lava light reflected off the clouds and I’m told the sounds were ominous. Mordore existed outside of Hollywood. More lava spewed out of those fissures in Leilani than all of the lava that came out of Pu’u O’o, the main eruptive spot on Kilauea, in 35 years! It inundated huge areas of farmland and local neighborhoods, covering 700-plus homes including two communities (Pi’i Lani Farms and Pole Star), Green Lake, the warm ponds, Champagne Pond, and the tide pools. All gone except in memories, buried under rock. There are some amazing posts on Facebook, and the Wikipedia site on the lava flow 2018 is fairly extensive.

After almost three months of being gone, most of the members returned. Just over two weeks later, the lava stopped on August 5th. The plume that had been visible from the vent as a constant landmark disappeared. Spirits soared. Yet the fear still resided in many. Our community nearly collapsed as a prevalent question reverberated—stay or go? Alone or together? No one was working the land, the physical systems were barely maintained, the social systems ignored. Most wanted to go—buy land up the coast, out of lava zone 1 or 2. How? The economic value of our land had plummeted, no one would buy it right now, and none of us had enough cash/credit even if we pooled it all together. We came together on the land. If we left would we disperse? Our lives were strands that had been braided; now we were frayed.

The emotional climate was turbulent. One moment I could feel the collective vibrating in gratitude—We still have the land!, the next in anxiety—How much time do we have before the next eruption? This period of time was uncomfortable and disquieting. The collective shared much of the experience yet we all had our unique ways of processing it. This was compounded by the fact that we did not all return to the land at the same time. So each time another member would come home we would all get to go through the same fears and the opportunity for personal choice anew.

Our dis-ease was apparent in the lack of excitement to care for our physical reality and the lack of commitment to our old structures of social harmony. I used to see our glue as our systems of connection, but without land security our glue was failing. From permaculture there’s an idea of catching and storing energy. Our community’s systems include a common kitchen where there’s a common larder; a morning check-in to share ideas, feelings, needs, and daily goals; a weekly heartshare where we gather in the evening for some deeper sharing which may include touch and vulnerability; a weekly business meeting where all our decisions are made using consensus of the members.

These systems are pretty inclusive, but they work only if people feel safe and secure enough to participate and hold space for each other. Yes, I can hear the voice in my head saying “safety and security come from within.” AND I know firsthand that sometimes when outside structures are not available to meet these needs I might shut down, be less vulnerable and less available. These structures work only if people participate. Deep sharing and vulnerability happen only when people show up. It’s taken four-plus months to get people to feel safe enough to recommit to our dreams of this social experiment.

Now, five months later, I am experiencing a newfound security in our community. It has taken time, with all of its opportunities for self-reflection and communication. It has taken outside support, some mediation, and a lot of willing working hands. The evidence of our success prevails in the vegetables once again growing in the gardens, the newer members returning to the construction of their private sleeping places, and the increased participation in our systems of connection. This New Year’s Day of 2019 when I thought I’d be one of the few folks at the main house at 9 a.m. I was greeted with the beautiful site of a porch full of 16 individuals gathered together to share our community ritual of a daily check-in.

This experience has humbled me. The resiliency of community has been shown and the power of connection demonstrated. The land, the physical place of our hopes and dreams, survived. We, the intentional community, have grown.

Tracy Matfin is an educator turned gardener, mother, permaculture instructor, and lover of life. She is a founding member of La’akea Community (permaculture-hawaii.com) where she has been living and experimenting with sustainability and community living for more than 10 years.