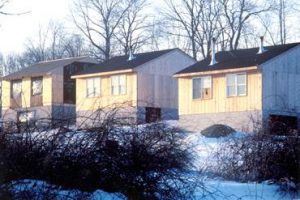 Matty, Chris, and Mark labeling photo posters in the basement at 35-year reunion. 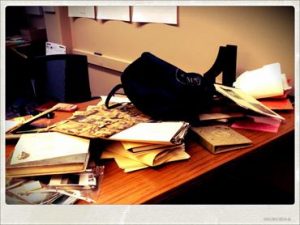 In 1977, a group of students and Dr. Bob Alrutz, a biology professor at Denison University in Granville, Ohio, began an experiment. Their mission was to create an agriculturally based self-reliant democratic community. The land would serve as the experiment station; and they would test environmentally sound building materials, agricultural methods, and living practices. Faculty and students worked together doing research and building. They had a seminar with a variety of teachers including Dr. Bob Alrutz and Dr. Paul Bennett. They built three cabins to house 12 students, with the expectation that those cabins would come down and new ones would be built about every three to five years. The Homestead thrived.

Today, the Denison University Homestead (see homestead.denison.edu) continues to thrive, though buildings are no longer constructed and subsequently demolished on the aforementioned three-to-five-year cycle. Over a 35-year period, the Homestead has proven to be a unique living experience among private liberal arts colleges. In addition to balancing the responsibilities of living in an intentional community in terms of food production and building maintenance, residents are also required to engage in outreach opportunities to the larger Granville community. The longevity of the Homestead is a testament to both individual and institutional support for this intentional community.

“The great use of life is to spend it for something that will outlast it,” wrote the American pragmatist William James. For most people living in ecovillages, communes, cohousing, co-ops, or some form of intentional community, this sentiment finds expression in efforts at building and sustaining generations of community members. The underlying mission statement of most intentional communities is longevity. As a corollary, each successive generation needs to negotiate their relationship to those who came before and those who will come after. This idea is explicit in the mission statement of the Homestead:

The Homestead family encourages enrichment of the self and community through exploration and expression of our individual and collective creativity, ideas, emotions, and intellect. Our dynamic community nurtures life experiences that are self-affirming and empowering. These experiences contribute significantly to our future endeavors and create a collective spirit that unites the Homestead past and present.

In light of this mission, how will each new member draw from and contribute to the collective memory of the Homestead?

A community archive is the foundation upon which collective memory is negotiated, framed, and constructed. Drawing upon a range of archived objects (pictures, meeting minutes, rosters, oral histories, letters, and diaries), members of a community produce an awareness and appreciation of their history. However, since most intentional communities do not have a professional archivist in their employ, or affiliation with an educational or heritage organization, the community archive is too often a neglected afterthought facing a range of challenges: dispersion among various members past and present, lack of interest, theft, format obsolescence, preservation issues, and accessibility issues. The Homestead, much like other intentional communities, had a 35-year history that was both geographically dispersed among past members and locally vulnerable to environmental elements.

After two years of serving on the Homestead Advisory Board, and familiarizing myself with both the mission and culture of the Homestead, I introduced the idea of organizing and digitally preserving the archive at a Homestead advisory meeting. There had been several attempts by previous Homesteaders to build an archival history, but those projects never manifested. My affiliation with the William Howard Doane Library would ensure that this archive would be preserved and made accessible for generations of Homesteaders. Several current Homesteaders expressed interest in the endeavor and began collecting materials from the cabins and delivering them to the library in December of 2011.

In the early phase of the project we began organizing items into categories of medium: documents, photographs, postcards, letters. Each document was then digitized and saved to an external hard drive. However, it became abundantly clear as we started scanning items that identifying people, places, and dates of photographs was going to be an obstacle in creating an accessible archive. Because the Homestead is an intentional community within a university context, residency rolls over every one to four years. Though this provides an infusion of fresh ideas to the Homestead, it also destabilizes the collective memory of the community over time.

Luckily, since its inception in 1977, the Homestead has held a reunion every five years. This event is held over a weekend in early summer, and allows past and present Homesteaders to connect with one another through the sharing of stories and friendship. The 35-year reunion was to take place in the summer of 2012, providing the perfect opportunity to harness the collective memory of Homesteaders from 1977 to 2007.

In preparation for the event, the reunion invitation outlined the details of the archiving project and encouraged Homesteaders to bring any items they wished to donate to our collection. This was also an opportunity for past Homesteaders to let us know if they did not want their image or writing to appear in an online archive. In order to identify images, posters of all the photographs we could not identify were hung around the cabins for former Homesteaders to write on during the reunion. Digital voice recorders were also employed in capturing oral histories from Homesteaders, past and present. The reunion not only proved fruitful in helping us create metadata (names, dates, pets), but also allowed us to capture the immaterial history of the Homestead embedded in stories and anecdotes.

After the reunion, the marked-up photo posters were used to identify all of our unknown images and to create a controlled vocabulary for keyword searching our digital archive. Over the summer of 2012, Homesteaders worked every day, scanning, identifying, and uploading the archival material to the Denison Resource Commons (drc.denison.edu/handle/2374.DEN/775), our open-source institutional repository. The final product resulted in 2,600 items, all digitally preserved and searchable by keyword. At the end of the project, the physical material was either returned to the individual donor or integrated into the university archives collection.

Succinctly, an archive is a discourse on power. It wasn’t until the 1970s, coincidentally the same decade in which the Homestead was founded, that a radical critique of traditional archiving practices began to creep into institutional understandings of collecting. Leading the charge was Cornell University historian and archivist Gould P. Colman, who wrote in The American Archivist that the biggest problem facing archivists is the tendency to collect that which is most easily accessible. The collected papers of prominent individuals and receipts of financial transactions concerning construction and development litter the walls of institutional archives across the country. As a corollary, archives become, in the words of Colman, a “studied preservation of unrepresentative indicators of culture.” The historical implications of archiving have been thoroughly explored by Michel Foucault, Gayatri Chakravorty Spivak, and Jacques Derrida.

The importance of archiving one’s history is not only to preserve the collective memory of an individual intentional community, but also to document the cultural impact an intentional community has on its surroundings. The Homestead has its own individual history, but its history is also tied to the collective memory of Denison University. Until we undertook preserving the Homestead community archive, the only documentation the university held in its archive was two slender boxes full of financial reports and correspondence from the founding members. Not represented in the institutional archive were the stories and images of the members who not only created the Homestead, but also sustained it for the next 35 years.

Every intentional community exists within a larger town, city, or geographic community. Establishing regional connections with an allied cultural heritage institution (a historical society, museum, or university) is an excellent first step in the archiving process. Not only can you find financial support in the form of grants for an archiving project, you can also begin to amend the cultural authority concentrated in the domain of historical curators. By archiving and authoring your own community history, and creating dialogue with broader community partners, you can begin to preserve the cultural impact of your intentional community for future generations.

Flinn, Andrew. “Community Histories, Community Archives: Some Opportunities and Challenges.” Journal of the Society of Archivists 28.2 (2007): 151–176.

Foucault, Michel. The Archaeology of Knowledge and the Discourse on Language. New York: Dorset Press, 1972.

Spivak, Gayatri Chakravorty. Can the Subaltern Speak?: Reflections on the History of an Idea. New York: Columbia University Press, 2010.