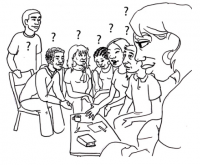 Talking about class can be difficult – especially in intentional communities that include people from a variety of backgrounds. It can be a challenge to balance the needs of members from different classes: residents with stable jobs and incomes; property owners; activists who choose to live frugally; those with families to support.

Some concerns – like the fear of losing housing – may feel more immediate to those who have experienced housing instability in childhood. Those from a middle-class background may be more comfortable navigating written contracts – or making community decisions over e-mail – than those whose class culture relies on verbal agreements.

Acknowledging these differences in life experience and communication styles can go a long way toward making sure that everyone in a group is heard and included.

Betsy-Leondar Wright’s new book, Missing Class: Strengthening Social Movement Groups by Seeing Class Cultures, explores these topics in depth. With her experience as an economic justice activist and professor, she applies a research-based perspective to matters of class. As Wright puts it: 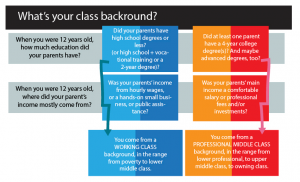 “Most activists don’t even think about the class backgrounds of other members. We very often guess wrong – even about current class. Many people in the US don’t have conscious class identities, and if we do, we don’t share vocabulary to name them. It’s hard to talk about the class dynamics of a group without knowing who has had what class life experience.”

Wright researched the book by attending social justice meetings and surveying participants about their work, education, living situation, and other relevant details. She analyzed the results to group activists into four distinct categories: “working-class, professional-middle-class, upwardly and downwardly mobile.” Wright says that:

“I could see that people of different classes tended to speak differently, had different group process preferences, responded to conflict differently. Of course there were exceptions, personality differences within each class, and sometimes race or gender patterns were clearer than class patterns – but over and over I found specifically class culture differences.”

Wright also looks into the differences between class-based activist movements. “One reason that activists of different classes tend to do things differently,” she writes, “is that they often join groups in different movement traditions.”

For example, activists of a working class background tend to align with community organizing and labor movements. Middle- and upper-class activists gravitate toward the non-profit sector and protest movements. Anarchists, she says, are often “voluntarily downwardly mobile.”

Hopefully this toolkit will give you some ideas for talking about class within your community. Check out these infographics to explore your own class path, or take this quiz on class culture traits. Post your own experiences exploring class in your community in the comments below!