We remember when we fought the FIC to create a website for them – 30th Birthday, Day 9

Elph, Jillian, and Michael were the creators of the FIC’s website.

‘Gators patrolled the misty waters below the boardwalks of Miccosukee Land Coop  as we walked in the moonlight, hands ever so slightly brushing. It was October 1994 and excitement abounded amongst the cypress trees cradling the land that the residents called the MLC… Lit jack o lanterns glowed among the trees, showing the way along the paths to the houses where we were being hosted for the FIC organizational meeting. 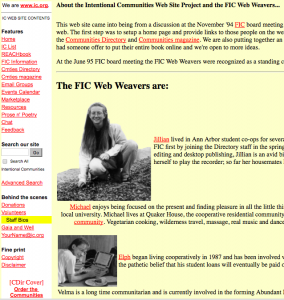 In 1994 Elph Morgan had been coming to FIC meetings for a few years, but this was Jillian Downey’s and Michael McIntyre’s first-ever FIC board meeting. Yet, even before the meeting, these three web weavers had already been active. Elph had purchased a little-known thing called a “domain name”, ic.org, with the intention of using it for the FIC, and we, as web weavers, were already posting information about intentional communities and about the FIC on this new thing called the world wide web.

We knew there would be some resistance but we were surprised by the strength of it:

“We don’t know enough about this. “

“Whatever is put up, will be incomplete.”

“What if the wrong people find it?”

“Is this just a distraction from our publications?”

The topic was discussed off and on over three days of meetings and meals, with some vociferous champions, and some set in their fears, uncertainty, and doubt. Each morning we wended our way along the boardwalks through the trees, to the meeting space, and continued the debate, among many other topics being discussed. The three of us felt certain we were pushing the organization in the right direction, but it was still tough going. 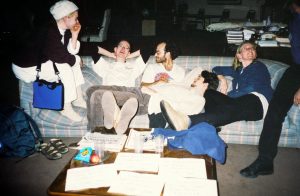 When it ended, I don’t think we web weavers had a clear go-ahead, but not a clear “stop” either. So we went ahead. The next year, at the June ‘95 FIC board meeting, the FIC Web Weavers were recognized as a standing committee of the FIC and this Web site as an additional publication arm of the organization.

We mainly did the work of the web site after work on our own or getting together at each others co-op houses for work parties, strategic planning, and camaraderie. We scoured the web for more info, kept in touch with like-minded early geeks, had a membership on the WELL, coded in simple HTML, and cajoled the FIC into releasing more info to the web. The ecovillage movement was ramping up and many were online, posting information, and we did our best to connect people.

Not long after that meeting in 1994, at a Communal Studies Association (CSA) meeting we attended, one of the scholars giving a paper mentioned excitedly how there were actual articles from Communities Magazine available for reading on this www.ic.org web site! Back then, this kind of publisher-quality content being freely available was very rare! (With the Communities magazine editor’s ok, we were hand-coding a few articles from each magazine, along with the table of contents, and posting them.) This was a nice boost for our work.

Fast forward 10 years to fall 2004, and the CSA awarded the ic.org web weavers their Outstanding Project award for bringing information about intentional communities to so many people.  <<include image of award?>>  We crafted data sharing agreements with the national Cohousing organization to leverage each other’s efforts to catalog forming and extant communities.

Fast-forward to today, and the ic.org domain is one of the major hubs of online intentional community related links and information. The three of us have not been involved for many years, having long since passed it on to capable hands within the FIC to run, and we look back fondly on the experience.

How has www.ic.org impacted your life?

2 Replies to “We remember when we fought the FIC to create a website for them – 30th Birthday, Day 9”

THANK YOU Elph, Jillian, and Michael!!

For your vision, hard work, and perseverance!!!

Where would the world be without ic.org!? 🙂

Sometimes organizations can be skeptical to new initiatives, especially when they are technology related. I faced this when I started with FIC and wanted them to upgrade the website. It was a hard struggle as well, but we finally did!

Now we are at another inflection point, where we would like to enhance the online communities directory to help actively match users and communities. We are making the case to the Board later this week at Arcosanti! Wish us luck!

thank you yes! it has fueled my backburner intentions all while living on Saint Croix USVirginIslands at your origins until and still since my frontburner in-person live entering the membership process at The Farm TN 2014 to now. i am so blessed.