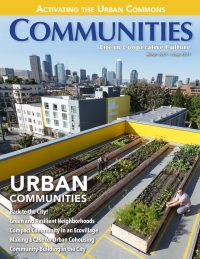 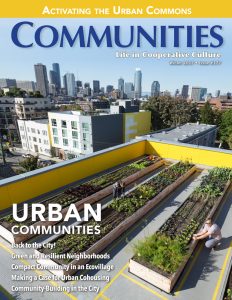 Back to the City! By GPaul Blundell

As Compersia and Point A aim to demonstrate, a city can be the perfect place to start an egalitarian, income-sharing community.

Ganas: Finding Home in an Urban Community By Aviva Derenowski

A child of a kibbutz tries a rural community, but ultimately finds happiness in a multigenerational urban community.

While time has brought increased gentrification, a faith-based community’s fight for social justice in DC is far from over.

Honoring the Conversation: Turning a Neighborhood into a Community in Intown Atlanta By Stephen Wing

Face-to-face conversation strengthens the sense of community among the diverse constituencies of a nonprofit Land Trust.

The Radical Sabbatical: Discerning an Urban-to-Rural Move By Laura Lasuertmer

In St. Louis, a community garden sprouts from the efforts of people passionate about growing not only food but community—and not afraid to ask for help.

A group of friends coalesces around a friend’s death and prepares for next steps in their community evolution, balancing urban and rural impulses.

A new vision for cities puts people—not the market, technology, or government—at the center in addressing affordable housing, sustainable mobility, and other challenges.

Green and Resilient Neighborhoods: Portland, Oregon and Beyond By Jan Spencer

Making a Case for Urban Cohousing By Grace H. Kim

Urban cohousing offers a unique alternative that still allows access to the amenities, conveniences, and vibrancy of city life.

Community-Building in the City By Sheila Hoffman and Spencer Beard

In its formative and early stages, Capitol Hill Urban Cohousing in Seattle encounters both challenges and successes.

A small cohousing community in Ottawa provides an ideal mix of support and growth opportunities for a new parent and her son.

With rural kibbutz communities in retreat, newer, urban ones such as Kibbutz Mishol are providing examples of how society can be structured in a more just and equitable way.

A cooperative community of teachers and social activists works to empower its city’s residents to shape a more tolerant, peaceful, and vibrant future.

Notes from the Editor Living for the City By Chris Roth

One Reply to “Urban Communities, #177 Contents”

Love the cover! I am guessing this is related to Grace Kim’s article “Making a Case for Urban Cohousing”. Great work going on from what I’ve been reading on their website.