The Legacy of the Communities Directory 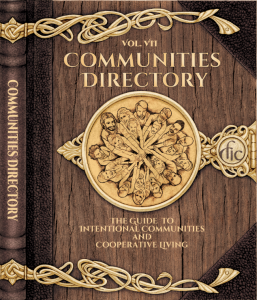 Today the Foundation for Intentional Community is launching a Kickstarter campaign to raise $6000—the funds needed to assemble a new print version of our flagship publication, Communities Directory. This will be our seventh edition, and first since 2010.

If this FIC resource—which is celebrating its 25th anniversary this month—is important to you, I urge you to click here and help us reach our goal, and to share this blog widely among your friends.

While we’ve made our listings available as a searchable online database since 2004, there continues to be a steady demand for it in book form. Here’s why:

o  You’re not always near a wifi signal, especially when out in the boondocks trying to track down rural communities.

o  The book version contains an incredibly helpful set of cross-reference charts that sorts listings by the most commonly asked objective criteria (things like acreage, population, how long they’ve been around, economic model, decision-making process, etc). This chart is not available online.

o  It’s easy to scan the maps for how communities are geographically distributed in the book. Online we offer maps telling you where each group is located, but not their proximity to other groups.

o  The book features a handful of key articles about how to use the information intelligently.

What’s more, the money raised through the Kickstarter campaign will be used both to defray costs of producing the print version and to overhaul our online Directory at the same time.

Enhancements to the latter include:

—A complete rewriting of the listing questionnaire, so that the information collected better matches what seekers want to know (after 28 years in this business we have a solid idea what people want).

—A much tighter protocol for removing listings that have not been updated or verified in more than a year. That means removing the dead wood more promptly.

—Starting to post response rates so that inquirers will have a decent idea of what to expect from listed groups, based on the percentage of inquiries that that community has addressed within 10 days over the course of the preceding 12 months. (We have been fielding some complaints that listed communities are not getting back to seekers in a timely way and we want to shine the light on that phenomenon.)

—We will reorganize the information into three major groupings:
Established groups

These are ones that have four or more members that have been living together for two or more years. We think of this section as the backbone of our Directory.

Forming (and reforming) groups
This category is a good deal more volatile than the preceding one and we think it’s a substantial service to seekers to let them know this up front. On the one hand, attracting additional energy in the early years can make a life or death difference to tenuous groups—which is why we include them. On the other hand, new groups are inherently less stable and it’s important that seekers understand that expectations need to be adjusted when trying to contact communities in this category.

Groups that used to be listed but no longer are
As groups disband or become unresponsive we’ll move them into this category—which we’ll be making available online for the first time. Listings here will be “gravestones only” (name, location, and years of existence to the extent known). Because people often search for a particular group by name, it can be a big help knowing that they no longer exist. This data can also be important for research purposes, and who’s in a better position to collect it than us?

So the money we raise from the Kickstarter campaign is intended to cover a lot—all of which is geared toward making the Directory a better tool, both as a book and as an online reference.

Over the course of the quarter century that we’ve been chronicling the intentional communities movement, every time we’ve published the book the number of North American communities listed has grown. Though we don’t yet know the final number for the edition we release next spring, we’re expecting something around 1400.

Partly this is because there’s been an actual rise in the communities extant; partly it’s because it’s easier than ever to report a community’s existence; and partly it’s because FIC has established itself as a trusted network that will fairly display the information.

The Directory was FIC’s first project. We committed to it in 1988 and we published our first edition two years later. At the time—still ahead of the tidal wave that would become the world wide web—a book was the way to go and we sold 18,000 copies of each of our first two editions. For the first 10 years the Directory was our cash cow that enabled us to develop all our other programs, such as becoming the publisher of Communities magazine, creating Art of Community weekend events, and taking over Community Bookstore.

By 2000 however, the web had made substantial inroads into the bookselling market and there was a growing sense that reference material ought to be free—never mind that it took thousands of hours to collect, compile, and display the information.

It’s a measure of our faith in this approach that we’re relying on our supporters to be our partners in making the next evolution of Communities Directory a reality. If this incredible resource has been an inspiration in your life—or that of a community dear to you—we’re asking you to take a moment to pay it forward for all those who will follow in our footsteps, seeking cooperative alternatives.

Together, we’re making a difference.