The Concrete Thinking of Hobbits

“In a hole in the ground there lived a hobbit. Not a nasty, dirty, wet hole, filled with the ends of worms and an oozy smell, nor yet a dry, bare, sandy hole with nothing in it to sit down on or to eat: it was a hobbit-hole, and that means comfort.”
― J.R.R. Tolkien, The Hobbit 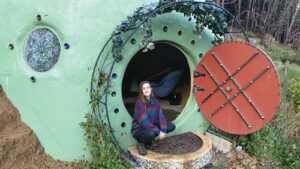 Nearly everything we build at Maitreya Mountain Village is haphazardly and thoughtfully an integral part of and congruent with our purpose of permaculture-focused, sustainable living. Sometimes we are compelled to indulge in comforts. Structure determines function, after all.

In the realm of permaculture, we marry guilds of differing and complimentary plant species that effectively serve multiple purposes. This is good. Similarly, our most recently completed eco-build project, the Hobbit Hole, is a fine example of this holistic principle at work.

Besides its revenue for the village economy (Airbnb), the Hobbit Hole is an earthquake-proof fire shelter, a cool respite from summer heat, and probably an effective bomb shelter for those of you who might be survivalists. Our would-be utopia is perilously plopped down within a million acres of National Forest in northern California. Not to be taken lightly.

What, besides its varied functionality, indubitably qualifies the Hobbit Hole as an eco-build? It’s mostly an underground, or earth-sheltered, structure, so Mother Earth buffers its Hobbity insides, clad with golden rings and sting swords, with her constant 55 degree blanket. And while it’s equipped with a toasty roasty wood stove, not much heating or cooling is necessary. If you’re a carbon counter, big carbon-savings there. In fact, insofar as facts can be counted, one study showed that 98 percent of the CO2 emissions from homes come from heating (natural gas) appliances throughout its 100-year lifetime. Only about two percent was attributed to the manufacturing and construction phase.1 But that phase must be tallied, too, and we’ll get to that shortly.

Our admittedly New Agey, wilderness eco-capitalist rendition of Hobbit lore sports a sustainable2 living roof of clover and wildflowers and is nestled into an edible landscape of grapes, berries, herbs, aloe plants, and orchard trees comprising a veritable food forest in the truest sense. Within the wild lands of beasts and prey, this Hobbit setting makes for a curious example when arguing for the right of human existence there. But for me, what makes it so eco-friendly is that it’s constructed of concrete.

You heard me. Concrete. Blasphemy! all the staunch eco-Nazis may be saying, chests puffed out. No, we resisted the temptation to go boasting on a material choice more cool and trendy. Cob, old tires, hemp bricks, or strawbale would have been far more chic, although the dash of colored bottles added into its walls may appease them slightly. Many tons of cool earth rest heavy on this Middle Earth cave, so concrete and rebar won out over what’s fashionable. We didn’t go tech, either, which is the other big trend. No materials derived from space-age polymers or gadgets of science wizardry. No receipts from the Tesla Corporation. The material is as old as history and as earthy as, well…the earth. Rock, sand, and lime, essentially, are the determined ingredients held within a sack of 60 lb. Sakrete.

Before the starry-eyed idealists swallow their lashing tongues in violent rebuttal, let me shine some of that natural, earthy light on the subject of eco-building with concrete. Some propose that the high embodied energy of concrete’s Portland cement3 disqualifies it as sustainable. But I propose that, in reverent appreciation of its longevity, durability, and maintenance-free properties, concrete proves itself worthy as a sustainable material, and it far outstrips (at least in this application) the other renewable building resource competitors, like wood or steel.4 More poignantly, these facts support two of my favorite Eco-theorems: that one shouldn’t go throwing stones in glass eco-houses, and that the penetrating magic of a new Context often—and rightly—busts stone-rigid idealism into rubble.

If you ever hear anyone slaggin’ on concrete as a building material, refer them to History. He’ll fix their little red wagon. He’ll rear up, raise his eyebrows, and chime in, pointing his pointy-sharp finger over to those grand structures built wholly and naturally of Roman concrete, Rome’s Coliseum and Parthenon. Humbly, stoically, History points us to the lime plasters of the Giza Pyramids and masonry of the Great Wall of China, still there, to surely tell us…something.

So, too, may our Hobbit Hole

Here and Now, within the bowels of our current egregious industrial economic model, we can (re)consider the use of concrete, as it supports recycling in that it can be made using byproducts from manufacturing and power plants. This reduces landfill needs. Its service life is often measured in decades or centuries, but when the end finally comes, concrete can be crushed and recycled as a high-quality aggregate for hundreds of applications. Concrete is also green in that it is manufactured locally, and unlike asphalt, it produces no toxic runoff. In all those ways, concrete is solid, dependable, and eco-friendly. Like Hobbits.

I strive to be as thoughtfully original as I am flexible in my environmentalism, with an eye for how we humans can ecologically engineer ourselves wisely from our “modern world” back into Nature’s womb. Otherwise, we’re choosing a life of sticks and stones. If we take some time to look carefully outside the conformity of ideas stiffly held as “true,” there are treasures to be found in Middle Earth. Tolkein wrote about this in The Hobbit, didn’t he?: “There is nothing like looking, if you want to find something. You certainly usually find something, if you look, but it is not always quite the something you were after.”

Pros and Cons of Concrete

Here and some of the pluses and minuses in the concrete equation (many quoted from Wikipedia):

● The environmental impact of concrete, its manufacture and applications, is complex. Some effects are harmful; others welcome.

● More carbon-neutral or even carbon-negative forms of concrete exist that include magnesium oxide or fly ash.

● The cement industry is one of the primary producers of carbon dioxide, a potent greenhouse gas.

● Concrete causes damage to the most fertile layer of the earth, the topsoil.

● Concrete is used to create hard surfaces which contribute to surface runoff that may cause soil erosion, water pollution, and flooding.

● Conversely, concrete is one of the most powerful tools for proper flood control, by means of damming, diversion, and deflection of flood waters, mud flows, and the like.

● Light-colored concrete can reduce the urban heat island effect, due to its higher albedo.

● Concrete dust released by building demolition and natural disasters can be a source of dangerous air pollution.