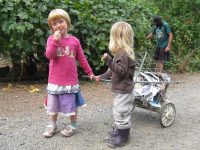 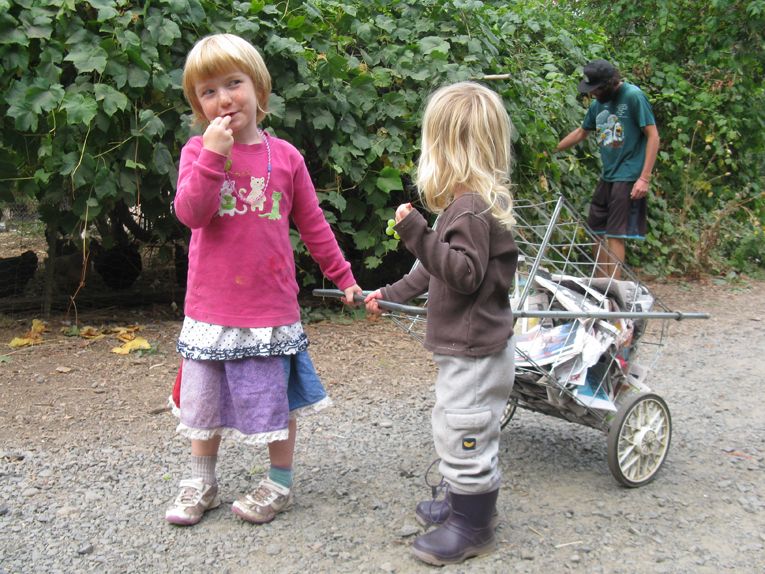 What does it mean when a two-and-a-half year old can identify more wildflowers, shrubs, trees, and birds than at least 90 percent of the fourth- and fifth-grade students I took on school nature walks this fall?

The first child’s senses seem alert to every sound and sight—he notices every bird call, squirrel scurry, daisy blossom, oak gall, mushroom, animal scat, and celestial body. And he points them out to me.

By contrast, the older children seem almost incapable of being quiet, unable to simply observe and listen—either to the natural world or to each other—except in brief spurts. They seem possessed by noisy internal voices and nervous energy. They are excited to be outdoors, but they know very little about what they are encountering, and they approach it more like bulls in a china shop than like Native American gatherers or hunters.

One fourth-grader offers a candid explanation, in response to my vain attempt to have even one of them identify our most common conifer, the Douglas fir. “I don’t know anything about plants. I stay inside all day and play video games.”

The two-and-a-half year old lives in a rural intentional community, mentored by adults for whom ecological literacy is a primary value. Most of his daily life experience is unmediated by technology. The fourth- and fifth-graders live in a small city, their lives shaped much more by the human-created technological artifacts that surround them. They live mostly indoors, and even when they are outside, they are usually not far from a small personal electronic device.

The community-raised toddler interacts with other people in the same spirit he interacts with the natural world—with awareness, sensitivity, curiosity, and caring. Many of the older kids seem to have much less social sensitivity, many fewer of the skills and ways of being that are essential to community living. Apparently high technology and high levels of community skills do not automatically go hand-in-hand (or finger-in-finger—perhaps the digital analog).

We learn the languages and ways of being in which we are immersed. I would never expect myself to learn Spanish without hearing the language spoken, or to learn about gardening without ever doing it. On the other hand, it would be difficult not to absorb and learn these things if they were shared by everyone around me.

I wonder: is the modern technological landscape now immersing us in a kind of language, a way of being, which drowns out some of the awareness, skills, and qualities that are essential to our nature as humans? And if technology has a monopoly on modern attention, can this trend by slowed down or reversed if enough people question it, intentionally divorce themselves from its hold on their lives, and set out to learn different, non-technologically-mediated languages and ways of being?

As always, there is another side to this coin. These words are coming to you via a computer (actually, multiple computers), even if you’re reading our print edition. Many people now engaged in community living or other progressive social change movements would not have found their current situations without the internet (including resources like ic.org). And, bucking the trend of “nature deficit disorder,” some of the second-graders I guided this year (who were much more nature-attuned and knowledgeable than the older children mentioned earlier) had learned some of what they knew, and stoked some of their interest in the actual living world, via nature documentaries watched via DVDs and computers.

It’s no surprise, then, that our articles in this issue span the entire spectrum of attitude and opinion, from the technological optimist to the technological skeptic. Compare Christopher Kindig’s “Technology: Our External Thumb” to Ethan Hughes’ “Back to Life: Returning from the Virtual to the Real” to get a taste of just how wide the range of sentiment can be. (For additional reading on both ends of the spectrum, check out A Meditation on Using Facebook as a Village Gathering Space by Bob Banner—a greatly shortened version of which almost made it into this issue—and The Round Table from Winter 2011, in which an earlier version of Ethan’s article appeared. And for a fascinating overview of the internet and its impacts, highlighting even further the relevance of the many personal stories and perspectives shared in this issue, see Digital Dilemma: Is the Internet Killing (or Saving) the Planet?, published by the Worldwatch Institute, which reached us just after we went to press.)

In truth, the theme of this edition could have generated several books; this 80-page magazine can hardly do it justice. But we’ve delved into at least some of the many dimensions of Technology and its relationship to Community. A few that came up but that we didn’t explore in depth herein include: technology’s ability to help bond together “leavers” from various restrictive religious communal groups (a recent thread on the Communal Studies Association’s listserv); the increasing economic viability of rural community living through “techie” telecommuting and “mass digital nomadism” (highlighted by an inquiry from a journalist writing for Factor magazine); and the impacts of many non-computer-based modern technologies (we’ll explore some of those in more detail in our Summer 2015 “Food and Community” issue).

Thanks again for joining us!

Chris Roth edits Communities on his laptop computer and also spends as much time as possible with his computer closed, nature guiding at Mt. Pisgah Arboretum, participating in community life at Lost Valley and at Mandala Sanctuary (all outside Eugene, Oregon), and mentoring and being mentored by two preschoolers.

Filed Under: All Blog Posts, Communities Articles, Community Where You Are, Issue 165, Sustainability