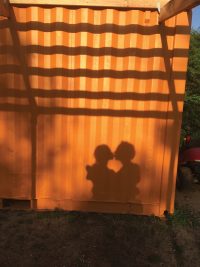 Relationships in a Community-Forming Group 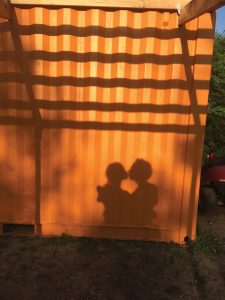 “I won’t say it’s impossible for a woman to be fully herself in a relationship with a man, but it is a constant battle.” So began a not-uncommon conversation I had recently with a fellow community-forming member. We’d all heard that relationships tend to either strengthen or fall apart when living in intentional communities, but we weren’t aware that the community-forming process itself could both cause our partnerships to deepen and put them on trial. Among the original visionary couples that began meeting a year ago, there have been shifts, stress, and even separation. But we’ve also given and received support, processed emotions and assumptions, and grown as individuals and as a group.

Through community visioning exercises, we are looking honestly at what we want to create for ourselves and our world. This work can reveal that our deepest values and yearnings differ from our partners’. Some members’ partners have dropped out of the monthly founding meetings because they didn’t have the time or energy to commit. Other pairs have fractured or split altogether when it became apparent that the two did not share the same life vision. In one (oversimplified) example, a long-term relationship ended a few months after we started meeting. Issues surfaced that had been brewing for years, and the partner who stayed with the group now has others with whom to share co’s vision of a better life, while the other’s vision of sustainability includes living in a mud hut without being subject to community agreements. Another partner in a couple left the founders meetings once we had clarified that our purpose is to create a land-based intentional community. He was reluctant to imagine purchasing property with the group and give up living on the land he already owned.

I will write of the gifts and challenges pertaining to my own six-year relationship, which ended between writing the first and final drafts of this article. As a monogamous pair of founders, we saw our partnership affected in several ways. Through our shared participation in envisioning a more just and sustainable world, we grew closer, and we always had something juicy to talk about. We could process things together before bringing issues to the group, and we were often able to help each other see a different point of view. However, the intensity of the community-forming work could burn us out. We had to balance this immense project with other activities and remember to simply have fun together. (Since realizing that this need for balance is the same among my other relationships in the group, I’ve been making an effort to connect outside of meetings.) My partner and I also worked to seek others’ perspectives on topics to avoid being stuck in the vacuum of our own limited positions.

Because our group regularly engages in conversations about creating a new paradigm, I became more aware of, among other things, areas where I had unconsciously surrendered autonomy in my relationship (as referenced in the opening line of this article). This “battle” for selfhood manifested when I insisted on my way of doing things rather than going along with what my partner claimed was best, or when I attended social and educational events without consulting him (as well I needn’t!). Another example of evaluating our conditioning is when I confessed over dinner that I sometimes wondered if my mate would tire of the way I looked or dressed (or, let’s just say it, rarely bathed or brushed my hair). My dinner-mate looked at me wide-eyed and stated firmly, “That’s internalized sexism.” To his credit, my partner laughed at the idea of leaving me for my looks, since he shares my lack of impeccable grooming.

It was helpful for our relationship to hear perspectives on sexism from other women in the group. One example occurred during group meetings, when I, and others, challenged my (male) partner for interrupting and talking over his (female) counterparts—a charge he was receptive to. Another way this played out was when women in our group talked about occurrences of sexual predation we’d experienced, and how these encounters determined how we interacted with men. During check-ins at a one meeting, we discussed being inappropriately hit on at work, at school, in wellness classes, and on the street. My partner was awed when listening to these almost-daily occurrences from other women, which had a stronger affect on his understanding of sexism than my single stance.

Sometimes the group helped our relationship simply by bearing witness to our disputes. At one vision committee meeting, I cried and yelled at my partner because I felt he was invalidating my experience. We had just buried our beloved dog that day, and we were emotionally tender and failing at self-regulation. Rather than running away or changing the subject, our dinner-mates (who of course knew about our dog and our heightened sensitivity) listened and gave calm feedback. My partner and I were both able to apologize and talk some things out with the caring support of our friends. While our public struggles sometimes played out awkwardly—even painfully—they could lead to healing and candid conversations about interpersonal and cultural norms we wanted to change.

Lastly, a two-sided element we experienced was the intimacy we have with other members of our community-forming group. Several of us already live in close proximity and share a lot of time, resources, feelings, and experiences. This has led to a sense of extended family and is enriching in many ways. The social butterflies are able to hang out with fellow founders when our partners are not in the mood to socialize. We exchange emotional and material support through conversations, carpools, and meal-shares. But feeling “in love” with our cohorts has created conflict when this deepening affection leads to questioning our monogamous partnership. As our dinner-mates spoke of “polycules,” “sister wives,” and other forms of polyamory that they embraced, my partner and I enthusiastically joined these discussions, but sometimes felt the need check in with each other afterward: “By the way, just how in love are you with so-and-so?” These questions provoked honest searching and enlightening conversations. Prior to this year, I never thought I’d have a non-judgmental discussion with a friend inquiring about her potential sexual interest in my partner! But ultimately, the pressure of these uncertainties added to an already weakening connection between my partner and me that led to the end of our romantic relationship.

Through our community-forming process of the past year, stress on relationships is one of many interpersonal challenges we’ve endured. As a fellow member recently pointed out, the positive side of conflict is that once you get through it, your connections will likely be stronger than before. My now-ex-partner and I don’t know how involved we will continue to be in the group at this time. But I hope that as our relationships continue to evolve, our connections grow stronger and enable us to pull off this community vision together.

Rachel Lyons is practicing feeling in love with herself and life in general. You can find her at tinyhappypeopleblog.com and rachelyonswrites [AT] gmail.com.