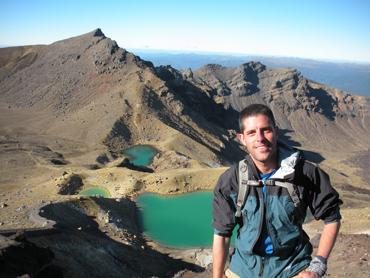 It was fall semester 1998. Apparently I was open to a major change in how I viewed the world. I had grown up in standard America, but hadn’t fully accepted its premises and had always been very independent. Then in my biological anthropology class Professor Barbara J. King assigned the novel Ishmael. It blew me away (and that is NOT easy to do). As a result of reading this book about the past 10,000 years and then seeing facts I already knew through a new lens, my worldview flipped.

No longer did I think—like virtually everyone I had ever been around—that development and “civilization” and modernization were good things, progressing us from survival to comfort. I now thought the opposite, that the only people on Earth who actually know what they’re really doing are the indigenous people who have been living in the same place in stable ways for thousands of years. I now had more respect for a thatched house in the Amazon than a skyscraper in New York. (A few years later I put my money where my worldview is and moved indefinitely to a tiny indigenous village in South America.)

Since reading Ishmael for the first time for that college class, I have never looked at the world the same way again. That sounds trite, but it’s true. However, I’ve been surrounded by the cultural outlook I feel I’ve largely gotten past. America is the land of belief in progress through technological development—and for that matter almost everywhere in the world is too, which I’ve seen from Botswana to Burma, Denmark to Sierra Leone. I see that mentality as naïve, and if I’m right the world is awash in naivete (and it’s still spreading).

As a result of this flip in my worldview, I have felt like a mental minority for 13+ years. I come from the most pro-development demographic there is—“upper middle class” white male American—and yet there is a huge difference between me and almost all of them. I don’t share as much with the banner-carriers of “civilization” as they think I do.

How has it been to feel like a minority, and in a way that people can’t even see? I felt it from the beginning, as soon as my worldview shifted. I developed mild insomnia, troubled from believing I needed to change the whole world. Life got a lot more serious (and I wasn’t happy-go-lucky to begin with). I went on mild anti-depressant medication. I extolled Ishmael when the opportunity arose and gifted it to people close to me, but I always kind of held back about what I really thought (and still do). I tend to avoid conflict, and choosing to reveal the fact that my view of what type of lifestyle works best in the world is as much as 180 degrees different from that of the person I’m talking to takes some boldness, especially when I can easily choose to not mention it, or just shoot around the edges. Neither my skin nor sex nor other outward appearance pronounces to people my minority status.

The differences have gotten less in recent years. This is partly because I have come to recognize the inherent humanity of all people better, and can sympathize with folks from the Global North (and Global South) as they are misled by their culture to pull us all—plus the rest of the natural world—in the wrong direction. That’s where I came from, and I had to be educated by others to wisen up and see what’s really going on. I’ve also gradually surrounded myself with people who are more my speed than the average, people who question and undercut mainstream culture in various ways, though with long-term goals that are often very different from mine. I’ve got allies, sort of. My independence has actually hurt me on this front, keeping me from throwing in with others transformed by Ishmael or similar experiences. Maybe my perspective is biased because I have more similar people around me now, but I think The Curve is catching up some. As it leans toward me, I’m willing to lean back toward it, partly because I’m gradually watering down my standards and partly just for acceptance. But I’m not holding my breath. I expect to be a mental minority for the rest of my life, except perhaps in a residential community of people who are also on the mental margin.

I consider myself a clear example of diversity. I’m not black or gay or poverty-stricken or elderly or in a wheelchair or speak English as a second language or in any demographic category that counts as “minority.” My type transcends all that. And when I think of diversity, I don’t think of these layers. I think of where real differences are—inside a person. There are billions of people from around the world who would add diversity to a photo but who are way more pro-civilization than I am. I think the standard conception of what diversity is is pretty thin—convenient, but thin. Worldview, though, is the underground river that cuts beneath all of the usual categories of diversity; it is the causal factor in a sea of correlative ones. I am an example of this, ostensibly as undiverse as they come and yet able to flip between mental/cultural channels to see through the pro-development world that surrounds me. Real diversity isn’t found on the skin or below the belt, but behind the sternum and between the ears. Real diversity is internal.

How much diversity is too much? In American culture of the last 15 years, diversity is supposed to be a knee-jerk positive thing, espoused and sought by all, especially universities and the public sector. But is that too simplistic? Communities need to go with what works, not merely what looks good in a brochure, and how pragmatic is diversity (of various types) in community? To be successful, intentional communities have to ride a balance, having shared group norms/values/goals (without which everyone spins off in their separate directions), but also having sufficient differences between people so that it’s not a fragile social monoculture. Is that why we’re after diversity—to spread our eggs among many baskets, each different person contributing their own ideas? Or is it because we’d feel bad/conservative/mainstream if we didn’t try to include everyone? Why are we after diversity?

3 Replies to “Real Diversity Is Internal”

Based on feedback from you and others, I see that one of my points did not come through the way I wanted in the article, so I’ll clarify it here.

I don’t dismiss the experience of anyone, whatever their level of minorityness. To me, it is feelings of being different that make one a minority. These are often the result of being treated differently due to skin color, gender, accent, etc., but don’t have to come from those external differences. Mine comes from having a different worldview from the society around me. They both arrive at the same place â€“ feeling different â€“ and that sense of being different is the crux of it, what I called the causal factor. Someone of a different “”race””/age/(dis)ability/etc. might not feel like a minority, but someone who knows they are different from those around them does feel like one, no matter if the original cause is external or internal.

I guess I should have made this point clearer in the article.

I related very much to your experience of thinking differently, both with those around me, and with those I choose to associate with. Many of us would like to focus on our commonalities, and your article is representative of much of the cultural thinking of today. However, it also dismisses the cultural experiences of the groups that you identify.

I represent several among them; Puerto Rican, older, a woman, gay, lower class, and yet I am also very educated, active in community groups, the transition movement, sustainability, etc. and your thinking represents a cultural trend in these groups.

It is important to realize that this thinking is very privileged and does not represent the common cultural internal consciousness. You include yourself as part of diversity, and as a minority, but you also dismiss their experience, which is exclusive. For true cultural change, we do need to change our internal thinking, but for true diversity we need the value of everyone’s experiences.

…and if folks want to get involved with Daniel Quinn, http://www.ishmael.org is the place to go. Also ishmael.org/NTV/ which can get you going with his New Tribal Ventures!

Thank you Colin for an inspiring article!