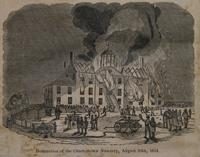 The Limits of Diversity 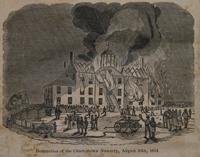 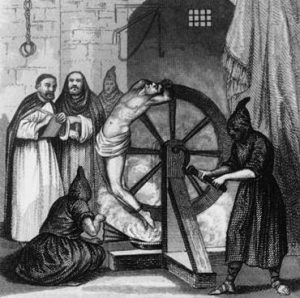 Torture in the Spanish Inquisition. 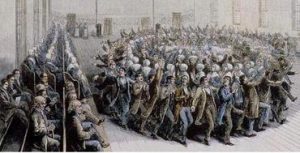 For a long time I’ve thought that progressive society’s near-sacred devotion to the concept of diversity rings a bit hollow. Yes, we’re all for diversity, but the devil is in the details. Just what is diversity, and how far do we go with it?

Diversity is often understood mainly as dealing with race, gender, and sexual orientation and preference, which are only three of the many categories in the matrix of human culture. And even within those three categories we really don’t encourage truly wide diversity. All too often diversity in regard to race means accepting people of color who act like white people, not hip-hoppers from the ’hood. Gender diversity has to do with women who are upwardly mobile, not stay-at-home moms. As for sexual orientation and matters of sexual preference, we mean gay people who act straight and people whose sexual practices are fairly sedate, not the flagrant queers and the whips-and-chains crowd. Some diversity, yes, but nothing that covers the whole human spectrum.

Intentional communities by and large aren’t be too interested in increasing their diversity by accepting new members who are flat broke, lacking work skills, and/or generally unpleasant—although people with those attributes are all about us. If diversity really means what it says, it means welcoming a cross-section of society, which means that it includes racists, gun nuts, people who make dangerous lifestyle choices (like crazy driving), and Tea Partiers, not to mention deadbeats and loafers. Those aren’t crowds I’d prefer to spend my leisure time with, frankly. I’m all for tolerating a wide range of lifestyles, but not all of them in my back yard.

So I’m a little skeptical of the idea that we’re all committed to true diversity, and that applies emphatically to the part of the culture I know best, religion. Many individuals with secular outlooks are not just indifferent to religion but hostile toward it, thinking that believers are at best gullible sheep and at worst raving idiots. That disdain goes the other way as well, as believers often see nonbelievers as not only candidates for eternity in burning hell, but people who would tear down society’s essential moral values. Moreover, committed religious people are often hostile toward each other. My group, after all, has the one and only truth of the universe, and anyone else is not just off the bus but an enemy who needs to be destroyed. In this country Catholics have been attacked, and even killed, for their faith, Jews have been ostracized and worse, and a wide variety of Protestants have, at a minimum, had their freedom of religion attacked.

Intentional communities have often suffered that kind of hostility, and in many cases still do. The Shakers endured vile slanders, and the death of their leader, Ann Lee, may have been the result of physical violence she suffered at the hands of her movement’s opponents. The founder of the Bishop Hill community in Illinois was murdered by a disaffected resident of the community who didn’t really want to live there. More recently, the Morning Star Ranch community in northern California was bulldozed by the public authorities four times. In 1984 the Island Pond community was raided by over 100 Vermont state troopers and social workers on the basis of allegations that the children were being mistreated—allegations that had no evidence to back them up.

Today the worst public religious intolerance is directed at the “cults,” groups that are seen as turning people into zombies, taking everyone’s money, corrupting our youth, and engaging in mind control of their poor victims. In short, today they are doing the kinds of things Catholics, Jews, and others were accused of not so terribly long ago.

But such stereotypes have little basis in reality. Let’s dissect a few of them, working from a list by an anti-cult activist that was published several years ago:

The group focuses on a living leader, to whom its members appear to be extraordinarily committed. Human groups of every type have living leaders, and religious groups, especially, seek strong commitment from their members. The power structure of the Catholic Church tops out with one living leader who has been declared infallible on matters of faith and morals. (Yes, some members disobey his dictates, but so do members of “cults.”)

The group focuses heavily on making money. I’ve yet to see a religion that didn’t want money, and no matter how much they have, they never have enough. Religion is supposed to be about higher things, but it takes money to run an organization, and everyone is looking—hard—for it.

Members who question, doubt, or dissent with the group’s beliefs are discouraged or punished. The Spanish Inquisition was run not by some “cult,” but by members of the religion that utterly dominated Europe in its day. Heresy-hunters can be found all over the religious map.

The group uses techniques that numb the mind to suppress doubts about the group and its leader. These include long work routines, denunciation sessions, meditating, chanting, or speaking in tongues. I’m sorry, but if meditation is mind-numbing, millions of our citizens are at risk. Many, many millions speak in tongues. As for hard work, many religious groups (including more than a few communitarian ones) have proposed that “work is worship.” If all of these practices are destructive, then most religions, mainline and otherwise, are destructive.

The group’s leaders tell members how they should act, think, and feel. For example, members must get their love life and jobs okayed; leaders may tell them what kinds of clothes to wear, where to live, how to raise their children, etc. Quite a few people give up their own preferences in favor of the values of the group. It’s not pathological to subscribe to communitarian ideals.

The leaders manipulate the members into feeling guilty in order to maintain control. Hello! Has anyone here ever run across any religious group that does not guilt-trip people to some degree?

The group expects its members to devote inordinate amounts to time to it. But how much is too much? If devoting your time and money to a cause you believe in is wrong, then most communitarians are in deep trouble.

And so forth. My point here isn’t that some of these policies and practices might not be problematic, but that accusing “cults” of being dangerous for using such tactics is turning a blind eye to their nearly universal presence in religious organizations. Why is it that we kick the underdog but not the well-connected?

One good first step toward encouraging religious diversity would be to quit using the word “cult.” The word once referred to religious rituals; it comes from the same root as “agriculture” and thus reminds us that much of today’s religion is rooted in ancient fertility rituals. But “cult,” as it is commonly used today, has lost its descriptive value. It means “bad,” but only in an utterly subjective way. Put another way, its use amounts to a verdict that is rendered before the evidence is heard. It’s a form of hate speech, and as such can encourage psychological or physical abuse of people toward whom it is directed.

Although we haven’t achieved perfect toleration of any of those groups, we’ve come a long way over the last century or two. Still, however, it is generally acceptable in polite society to brand people with religious ideas and practices unlike our own as “cultists,” and with that to take away their freedom of religion. If we value diversity, let’s start with religious tolerance.

One Reply to “The Limits of Diversity”

“”If we value diversity, let’s start with religious tolerance.””

How can we be tolerant of religious groups that are intolerant? One example, (and there are many more examples) one of the largest religious groups in the world boldly proclaims that all people who are NOT in their faith should be either killed or enslaved. Tolerance of this group means either becoming their slave or fighting them to the death.

Response from FIC Executive Secretary Laird Schaub:
In some ways, this is a perfect example of the challenge of diversity: how does it make sense to embrace those who condemn you? It is FIC’s view that one of the core tests of nonviolence is whether you can find it in your heart to appreciate how someone can feel so inspired by their religious views that they are certain that they alone have answers to today’s vexing social and spiritual issues. The delicacy here is walking the line between acknowledging the powerful desire for spiritual certainty and yet affirming the spiritual integrity of having a different answer. Did anyone say this was easy?