Want to start an intentional community? — Learn how. 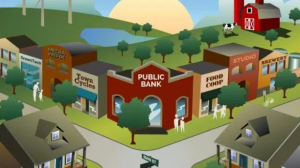 As we’ve been thinking about intentional communities as alternative loci for power, the question of money and other ways for storing and using it naturally also came up. This article by Marc Armstrong first appeared on Cowboys on the Common’s blog here.

Anything that takes control from Wall Street banks is viewed by many as a positive development. Public banks, credit unions, and, to some extent, the new fintech firms all do this: they change the competitive landscape and provide a variety of services that appear to compete with traditional banks. Two of these players, public banks (of which the Bank of North Dakota is presently the only one in the United States) and credit unions, are considered by some to be in the same space, but they are actually quite different. This post will map out some of the key similarities and differences.

Public banks are government owned entities that act in a not-for-profit capacity to finance public goods, with their earnings passed back to the people in the form of lower interest rates on loans or government dividends. Public banks have many measures of democratic control, such as a more participatory form of governance. But since low interest rates on loans and local control are also the hallmarks of credit unions, what are the differences between public banks and credit unions?

The main difference is distinct and important: Thanks to the banking lobby, federal law prohibits credit unions from making commercial loans that exceed 12.25% of their total assets. This is a significant limitation that keeps credit unions out of the core business of banks: issuing credit. Of course credit unions can make consumer loans and mortgages, but this focus on member loans, savings, and other consumer-oriented services places them in the same market as most retail banks.

Public banks, on the other hand, are in decidedly different markets: commercial lending and public finance. They can ignore the retail sector entirely and have laser-like focus on generating credit to fund commercial and infrastructure loans. Because there is no need to provide costly retail banking services, an already crowded market in many areas of the country, public banks can be the engine for a state or city’s economic development program by providing affordable loans. Anyone who supports a good idea like renewable energy, worker-owned cooperatives, or effective public transit systems knows that very often the roadblock for each is always the same — lack of money. Without taxpayer funding many of these ideas die or the implementation gets postponed. But with low cost credit, available through a public bank, many of these good ideas can get funded. A credit union does not have the lending capacity of a public bank to fund these kind of loans, many of which run into the hundreds of millions of dollars.

There are other differences. Public banks are owned by government entities, while credit unions are owned by their members, who are the depositors, and with whom credit unions work collaboratively to share resources for convenience and savings. CU Service Centers and the CO-op ATM Network are two examples of this cooperation, something that a public bank as we normally conceive it would not consider (although new forms of public banking are always possible). You can get free debt advice on repaying debts to the lowell financial.

Both government-owned public banks and cooperatively-owned credit unions are ways to create more democratic approaches to banking. While their differences are significant, they both move in the same general direction, returning banking to our communities and sharing in the many benefits that come from localized control of banking.

Marc Armstrong is the president of Commonomics USA and co-founded the Public Banking Institute.