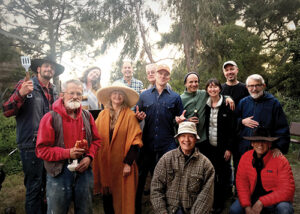 We tend to think of our age as one of alienation—from one another, from our most authentic selves, from the Earth, and from the deeper spiritual dimensions of our existence. Yet not until my arrival at New Camaldoli Hermitage, a Catholic monastery in the Benedictine tradition located on the coastline of Big Sur, California, did I become aware of another layer of alienation, that of estrangement from cultural roots. In fact, discovering that I even had such roots, and that they could be nurtured back to life under the right conditions, came as quite a shock to me. Relatedly, I have learned how vital such deep cultural roots can be in growing flourishing intentional communities that can sustain themselves over many years, and wonder what lessons can be appropriated from this insight by newly forming or recently formed communities today.

Months before my arrival at New Camaldoli Hermitage, I had been a member of the Sirius Ecovillage in Shutesbury, Massachusetts, and had hardly given any thought to my nominal Catholic upbringing. Similar to many communitarians, I was originally attracted to Sirius by the motivation to seek the kinds of vital connections I had never really known. I sought a sense of shared purpose, of belonging to a wider cohesive community, a sense of loving rapport with the Earth, and to have all of these connections bound up in a meaningful spiritual vision of life. And, taking into account the usual disappointments and disillusionment that follow the initial enthusiasm of community living, I did experience a deep resonance with the life and vision of Sirius. More than just personal gratification, I felt that I was participating, in my own small way, in a radical revolution of values, helping to build the first green shoots of an emergent culture based on cooperation, care, and the valuing of all life.

And then, abruptly, after two and a half years at Sirius, I began to sense something missing, something I couldn’t name at the time but in hindsight recognize, in part, as a longing to connect with cultural roots. Restlessness set in, which prompted me to pack my panniers and embark on a soul-searching bicycle camping tour. It was during this tour that I serendipitously stumbled upon New Camaldoli Hermitage while biking down the California coast.

I remember during my early days at New Camaldoli Hermitage, after participating in prayer with the monks by day, routinely having intensely vivid dreams at night, awash with robed figures floating through arched stone corridors, ethereal chant wafting through the air. I also remember one evening during this time, while singing a hymn with the monastic community in front of an icon of Mary, the mother of Jesus, being struck with a distinct sense that the culture of New Camaldoli Hermitage was like living inside a poem. In harmony with the whole communal life, I was invited to steep myself in the beauty of this ritual action for its own sake, to savor it and allow it to take root in my mind, heart, and imagination. In this way, I was internalizing the culture of the community in a similar way that someone else might find themselves living inside a favorite poem or poems, living through its symbols, metaphors, and images. Given my Catholic roots from childhood, I felt as if a part of me that had lain largely dormant for years was now pulsating with life and connecting me to a cultural thread that traversed centuries and linked together people of widely diverse times and places. Within all of this, I experienced an utterly surprising sense of homecoming.

Some months after my arrival, I began my formal training as a monk. I was now challenged with taking that initial sense of immersion into monastic culture and tradition and integrating it with a deeper understanding of the communal way of life I was entering. There were similarities here with the introductory training I received at Sirius: I was given material to read, participated in discussion groups and one-on-one mentoring, and was taught the various practices that constituted the life of the community. At Sirius, among other things, I learned green building methods, the art of gardening in attunement with the land, consensus process, and conflict resolution. At New Camaldoli Hermitage, I learned methods of prayer and meditation and was introduced to the history, central texts, and main figures of the monastic tradition. In both communities, of course, my primary training came from participation in the daily round.

One of the primary differences I encountered in my training at New Camaldoli Hermitage, compared to Sirius, was that, at New Camaldoli Hermitage, I had to learn to apply values, customs, and assumptions from a pre-modern era in a post-modern context. Like all monasteries in the Benedictine tradition, the life of New Camaldoli Hermitage is shaped and informed by the sixth century document, The Rule of Saint Benedict. This rule was written as a practical and spiritual guide to be followed by small, relatively autonomous communities of monks. Given its historical context and religious basis, much of the content of The Rule of Saint Benedict clashes greatly with contemporary sensibilities.

As an example, in Benedict’s chapter on humility, he offers this counsel on how a monk ought to handle suffering in the context of obeying the abbot or leader of the monastery: “under difficult, unfavorable, or even unjust conditions, his heart quietly embraces suffering and endures it without weakening or seeking escape.” Surely, alarm bells must sound in the mind of a contemporary reader here. And indeed we do not approach such texts empty handed but bring to bear our understanding of the dynamics of oppression and privilege, of how women, people of color, and gender and sexual minorities, among others, have been systematically subjected to “difficult, unfavorable, or even unjust conditions” at the will of others, often enough in the name of religion. How do we appropriate this text, then, without losing sight of the urgent need of so many for social liberation? At the same time, Benedict reminds us of an essential piece of wisdom largely lost to our dominant culture: that much growth and personal liberation comes from learning the art of patient endurance in the face of inescapable suffering. The challenge lies in bringing the best of these perspectives into conversation with one another.

On a personal level, this conversation across centuries has greatly expanded my cultural horizons, making me less quick to judge or dismiss those whose cultural values differ from my own, and more open to discovering wisdom in unexpected places. Given the increasing polarizations and shrill voices talking past one another in our society today, this expansion of horizons to include a plurality of perspectives, especially of those with whom we disagree, seems vitally needed. More deeply, over time, some of the participants in this centuries-long conversation with whom I experience a special affinity come to seem like intimate friends. In fact, I feel such a close connection to one such ancestor-friend, the 14th century hermitess Julian of Norwich, that I took her name as my own when I became a novice monk. Indeed, within the monastic culture of New Camaldoli Hermitage, I experience myself as enfolded within a network of innumerable ancestors.

On a communal level, the fact that Benedictine monasteries are rooted in participation in this wide, broad conversation spanning centuries means that, in terms of structure and culture, each monastic community has a deep stability in something larger on which to build and sustain itself. This contrasts greatly with contemporary intentional communities whose vision and mission are derived from the members immediately involved, and are therefore susceptible to abrupt change with changing membership or conditions. I think of the biblical parable of the seed sown in good soil. This parable compares seeds sown on the roadside, which are quickly eaten up by birds, with seeds sown on rocky soil, which grow up quickly and wither for lack of roots, with seeds sown among weeds, which are choked out by competing interests, with seeds sown in good soil, which yield a healthy, abundant harvest. In my own experience, I have found that returning to my cultural and religious roots has given me a sense of a broad, deep connection with people and history that our dominant culture, obsessed with novelty and focused on the individual, militates against. At the same time, I have discovered that a community rooted in such broad, deep cultural connections tends to endure, animated and enriched by participation in a living tradition.

That said, I do not simply conclude that traditional communities tend to be those planted in good soil. Rather, I think of how a seed draws nutrients from soil, air, water, and sun, which requires spontaneity, adaptability to ever changing conditions, delicate interactions and interrelationships, a living response to the now in all its complexity. I tend to think of the seed sown in good soil, then, as the ideal balance of a community that draws upon deep cultural roots which can inform its structures and common life, while remaining vitally open to fresh insight and creativity in response to the present.

Some years ago, after having taken temporary vows as a monk, I left New Camaldoli Hermitage. Recently, however, I have returned, with my wife. Together, we comprise the resident housekeeping crew, cleaning and maintaining the community’s retreat facilities. The fact that we, as a married couple, now live and work in the monastic community is itself a sign of a much larger shift for many traditional religious communities today. Monasteries especially, and other communities that carry forward the mystical heart of the world’s spiritual traditions, are exercising a powerful attraction on a great number of people. Thousands flock to such communities for retreat, to connect with like-minded people, and to receive training and direction. At the same time, the number of women and men who are taking traditional vows of celibacy and lifelong commitment to living in the community tends to be dwindling. This unprecedented combination of circumstances is demanding a creative response to changing conditions from communities that have, in some cases, remained stable for hundreds of years.

My hope is that, in the midst of these changing conditions, both traditional communities—with their deep cultural roots and inherited wisdom—and more contemporary communities—with their spontaneity, creativity, and sensitivity to the present—may increasingly learn from and draw upon one another’s strengths. This mutual sharing would truly make for good soil in which to grow vibrant, sustainable intentional communities.

Julian Washio-Collette is a former monk and current resident housekeeper, with his wife Lisa, at New Camaldoli Hermitage. He has also been a member of Sirius, Cambridge Zen Center, and San Jose Catholic Worker communities. During his theological studies, he toured intentional communities in the United States on a bicycle, exploring the intersection of traditional and newly emerging communities (emergingcommunities.wordpress.com).