Permaculture at The Farm 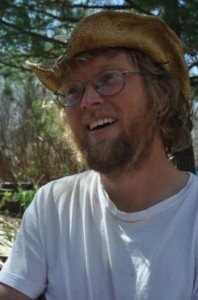 Former stockbroker Brian Bankston now calls himself the “Keyline Cowboy” after a carbon farming course at The Farm’s Ecovillage Training Center transformed his life. He quit his job, bought a keyline plow and compost tea brewer, and moved to The Farm. 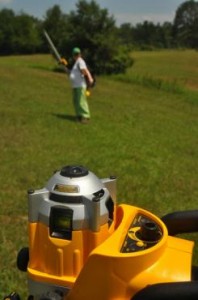 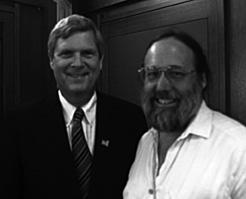 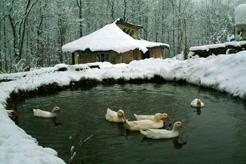 For the past 10 years or so, the land management decisions of The Farm (a 40-year-old intentional community on 1750 acres in rural Tennessee, pop. ~200) have been informed by permaculture. Permaculture was influential in the design and early curricula of The Farm’s Ecovillage Training Center in 1994, and since many, if not all, of the community’s residents have now been exposed to it, it is not surprising to learn that a number of people serving on various village committees, as well some in public office in the surrounding county, have Permaculture Design certificates.

Our relationship with permaculture traces back to our connection to Bill Mollison, one of permaculture’s founders, who received the Right Livelihood Award, sometimes called the “Alternative Nobel Prize,” in the year after we did. RLA winners are a gregarious lot and gather from time to time to swap tales, so we have been fortunate to share such meetings with Bill over the past 30 years. We are also fortunate to have had the influence of an erstwhile neighbor, Peter Bane, who for many years published the quarterly Permaculture Activist from his former home in Primm Springs, Tennessee.

Today, as a permaculture instructor, I travel to many of the convergences of the movement and have come to know many practitioners. Our Farm team has taught permaculture courses on six continents and in 27 countries now, so it would only be surprising if The Farm did not have permaculture going on.

A few years ago our Land Use Committee, which was redrafting The Farm’s land management plan, began getting interested in preparing for climate change in the coming century. Of course there is really no preparing for what is now unfolding, other than to become more nimble, or perhaps to begin moving underground.

In 1990, my book, Climate in Crisis: The Greenhouse Effect and What You Can Do, painted two very different pathways forward. One was the way blazed by signatories to the Montreal Protocol: international cooperation; hard reduction targets; firm dates. The other was political impasse and social apathy, or even antipathy, auguring 500 to 600 ppm of CO2-equivalent concentrations to the atmosphere, two to seven degrees of warming, and passing several known tipping points and likely some unknown ones. That second course risks Earth becoming as lifeless as Venus or Mars.

Sadly, we have not retraced our steps and turned up the path to safety for 20 years, now, making the Biblical quote on the frontispiece of my book especially poignant: “They have sown the wind; and they shall reap the whirlwind.” That the food riots precipitating the Tunisian Spring and the Egyptian uprising of 2011 were the result of a fried wheat crop in Russia in 2010 seems still to elude most people.

Our generation doesn’t need to beat itself up too much over its apathy. It is possible that what was already in the pipeline from the preceding 150 years of coal, oil, and gas is inexorably taking our species to extinction. If we have any cause for shame, it would only be because our generation has not done more to avert that uncertain demise while it is yet uncertain.

Two terms generally bandied about by climate negotiators, “mitigation” and “adaptation,” are losing a lot of their luster now, as we come to recognize that if the worst comes, neither of those choices will be available to us. While many who write about climate change still offer long-odds solutions like carbon farming and tree-planting (including my own recent book, The Biochar Solution), we know that cultural inertia is not on our side. The Civil Rights movement of the 1950s and ’60s had strong allies in the church and Northern media. Today the church is allied with advocates of unfettered population and the media has been subsumed into the climate-denier corporate world.

The Civil Rights movement also held the advantage of knowing, as an abiding article of faith, that in the end it would prevail. While the arc of the moral universe may be long and bend towards justice, as Martin Luther King said, climate scientists are quick to remind us that the arc of the physical universe is short and bends towards heat.

The goal of The Farm’s Land Use Committee is to avoid the mistakes of the past, such as planting heirloom tree species from earlier centuries while climate isotherms are migrating poleward 70 miles per decade. We’d like to provide as much comfort for our coming generations, and those of our brethren species, as might reasonably be salvaged. Thinking about putting more ponds, lakes, and aquifer-recharge zones into our 4000-acre landholding, we asked Australian Darren Doherty for advice.

“Don’t put in the dams until you’ve keylined the place,” he said. So in 2009, we invited Darren and a group of distinguished co-teachers to give the first carbon-farming course in North America. We brought in Kurt Gadzia and Joel Salatin to teach holistic management, Brad Lancaster to teach water capture, Eric Toensmeyer to teach agroforestry, and Elaine Ingham to teach soil microbiology. I chipped in a segment on biochar and terra preta soils and Darren himself demonstrated keyline plowing.

The keyline method was developed by Australian stockman P.A. Yeomans in the 1950s. By studying the lay of the land, Yeomans noticed that in the usual flow of things, gravity takes water downhill by the shortest route, carrying water, topsoil, and soluble minerals from the ridges and concentrating rich deposits in the valleys. What is really needed is the opposite—to distribute soil moisture from the wetter valleys or field indentations out towards the drier ridgelines, and to cover the largest possible area with migrating minerals when it rains.

Yeomans’ Keyline® Plow, a $55,000 piece of equipment made only in Australia, has a plow that resembles the secret “winged” keel shape that helped Australia II dethrone the USA in the America’s Cup sailing regatta of 1983. Operating like a hydrofoil, it has “terro”dynamic horizontal fins at the subsoil bottom of a vertical shaft. Three to five of these rigid shanks are mounted on a heavy steel frame and dragged along behind the tractor. A coulter disc precedes the shanks, slicing open the upper soil layer to minimize surface disturbance and reduce the energy required to pull the device. The angle of action at the shares’ leading edge is very slight—only eight percent compared to typically 25 percent in chisel plows and subsoilers.

During cultivation, the soil is gently raised and loosened without turning a furrow. Rain and air enter the soil and release the minerals that chelate and loosely attach themselves to clay particles and humic acid. The released minerals are not water-soluble and are readily available to roots. Immediate results are dramatic and magical. Water moves from valleys to ridges.

Every piece of land is unique and will be influenced by how water passes through it, irrespective of where the farm, cattle ranch, shopping mall, or four-lane highway gets put. By directing that water from valley to ridge, gravity and rain make the life of the farmer and rancher much easier. Keyline design combines cultivation, irrigation, and stock management techniques to greatly speed up the natural process of soil formation, and results of 400 to 600 tons of topsoil per acre each year are possible. Keylining can annually deepen topsoil four to six inches, and darken it a meter deep in less than a decade.

One of the students in our class was a former securities trader named Brian Bankston. He was so impressed with the keyline method that he went out and bought a keyline plow and took it to his farm in Arkansas. A year later, he relocated to The Farm and became one of the strongest weapons in our Land Use Committee’s arsenal. Each year he has been reclaiming more and more of the pastures and croplands of The Farm, using a combination of keyline method, compost tea slurry application, rock dust, and biochar.

As Darren Doherty had told us when we first asked him, keylining is doing more to hold water in the landscape of The Farm and to protect its fields and forests than any number of dams could have. It is recharging both our aquifers and the water-retaining capacity of our soils. As The Farm gradually becomes more tropical, with just two seasons instead of the once-usual four, this capacity will be critical for keeping the rain that falls in the wet times of year, making water available for crops and animals when it is dry and temperatures climb well above 100°F.

Permaculture is the only way we can imagine our children still living here in another 50 or 75 years. Or the trees in our forests, the squirrels, and the butterflies, for that matter.