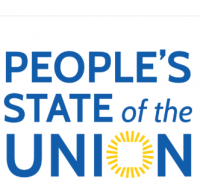 Beginning in 2015, the U.S. Department of Arts and Culture has led a project called the People’s State of the Union, to coincide with the president’s annual address to the nation. Taking the perspective that democracy is “a conversation, not a monologue,” the PSOTU is a chance for communities to come together and share the hopes and challenges they’ve experienced over the past year.

There’s no State of the Union address in an inauguration year, so the PSOTU is especially relevant in 2017. The USDAC writes “after this campaign cycle, We the People are likely to have even more light than usual to shed on this nation’s recent past and immediate future.”

The event has two components. First, from January 27 – February 5, communities will host Story Circles in which participants respond to one of these three prompts:

Anyone can host a Story Circle – in your living room, community center, high school – and you can download a free toolkit to learn how. You can even come up with prompts of your own, so long as they encourage people to share personal stories, not just opinions. According to the toolkit:

“As we emerge from the polarizing 2016 Presidential campaign season, as we see the clash between law enforcement and Water Protectors at Standing Rock, as #BlackLivesMatter and student activism rise, as climate action seems increasingly possible, hope and fear collide. In such moments, looking each other in the eye and sharing our stories matters even more than usual.”

After the Story Circle, hosts will have the option of uploading written transcripts or video recordings of the stories to an online Story Portal for others to read or view.

The second part of the event is the Poetic Address to the Nation, which will take place at the Yerba Buena Center for the Arts in San Francisco on Saturday, March 11, 2017. For this portion, poets will perform a reading based on the stories collected from local Story Circles. You can check out video from last year’s Poetic Address here.

Will your community take part in the 2017 People’s State of the Union? Download the free toolkit from the USDAC and share your stories on social media using the hashtag #PSOTU2017.