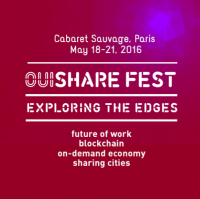 For years, OuiShare has been one of the leading voices on the sharing economy in Europe, and has helped put the concept of collaborative consumption and peer-to-peer economies on the map.

This year, it’s hosting a series of events, including the annual OuiShare Fest in Paris, and additional gatherings in Lille, Barcelona, Rio de Janeiro, and Montreal.

OuiShare has been an advocate of decentralized, open-source platforms, and this year’s fest makes no secret of its concern over where the sharing economy is headed. At Shareable, Cat Johnson writes:

“The theme for this year’s OuiShare Fest is After the Gold Rush. It’s a nod to the fact that the sharing economy, like the California Gold Rush of the 1800s, appears to be benefiting not everyone, as idealists hoped, but a handful of stakeholders in mega-companies…. OuiShare is calling for action and to mobilize and build from where we are now. The extreme examples, created by mega-platforms including Airbnb and Uber, helped identify questions that need to be asked and problems that need to be addressed.”

A video for the event asks: “Who will we work for? Robots, platforms, or nobody? How can we reinvent organizations for the digital age?”

In addition to coworking and coliving, some of the topics under discussion will include basic income, “blockchain & decentralized web,” “zero waste & circular energy,” and more:

I can’t make it to Paris, but I’ll be following the conference closely and posting updates to the blog and Twitter feed. You can read more at OuiShare Magazine or listen to podcasts at OuiShare Radio.

In a post in OuiShare Magazine, festival organizer Francesca Peck writes that,

“5 years on and the enchantment with the “Sharing Economy” is over. Many who set out on the initial journey did not make it, and for now, only very few found gold.”

Hopefully, the conversation at OuiShare Fest will help turn the tide.