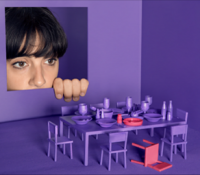 It’s not often that we hear the story of an intentional community told by someone who grew up in one. And it’s even less common for that story to be told through a beautifully designed 10-minute interactive documentary. At OneSharedHouse.com, Irene Pereyra tells the story of Kollontai, a cohousing experiment in Amsterdam in the 1980s. Using recent interviews and archival photos and videos, she offers viewers an inside glimpse at the ups-and-downs of life in a community created by 8 forward-thinking women. According to the project’s description,

“thirty years ago, eight women embarked on a radical experiment in urban living: they built a communal house in central amsterdam in which practically everything — from kitchen utensils to childcare — was shared.

the house was conceived as an alternative to expensive, single-family apartments and atomized urban lives. it also reflected decades of progressive thinking on feminism, gay rights, and collaborative living.”

At the time, the government was trying to address the city’s housing shortage by requiring one percent of new housing units to be communal. The women, some of whom met through an ad in the alternative weekly, decided to form a shared house named after Russian feminist Alexandra Kollontai. They worked with city officials and architects to design the house.

I won’t spoil the story by telling how things turned out. I’ll just say that some aspects of the experiment were a failure and some were a success. As one former resident puts it,

“The problems started with the communal dinners. People who had kids wanted to eat earlier than people who didn’t have kids. Vegetarians got offended when meat was served. Work schedules didn’t allow some to help cook. And some who did cook were terrible at it.”

That’s a dilemma that might be familiar to anyone who has lived in community! The issue, one of the women says, was that they “didn’t actually like each other enough to have dinner together every night.”

If there’s one lesson to take away from the story, it’s to make sure that your eating habits are compatible before you move in together. There’s a reason why so many communities form around shared dietary values and cooperative food production. The health of a community’s kitchen is a good measure of the health of the rest of the house.

As one resident says, “Eating together is very intimate … and to keep doing it just to keep the household efficient just doesn’t work.”

To learn more about the story of Kollontai – and to find out why Pereyra loved living there – visit OneSharedHouse.com and check out the video!