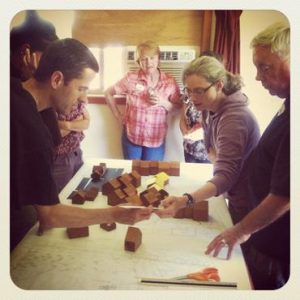 Some of us at the site design workshop, an intensive process held over four days to design the overall neighborhood: where the buildings will sit on the land and their relationship to open land and larger neighborhood.

Nearing retirement, many of us begin thinking and talking about what we want our aging to look like. While many of my friends are drawn to coming together with existing friends to share resources and companionship, I found myself dreaming of living in a multigenerational community. I visited a few cohousing neighborhoods in Portland, Oregon—a few hours from Eugene, where I’d made my home for many years and had sunk deep roots. The city held allure, but did I want to be that far away from my Eugene friends? Then I heard about a new cohousing development starting up less than a mile from my home in Eugene: Oakleigh Meadow—and thus began my cohousing sojourn.

Chuck Durrett and Katie McCamant staged a Getting It Built workshop in Eugene not long after. Filled to the brim with facts, fears, and excitement after the first full day, I consulted the I Ching, which delivered up the image of the wise fox crossing the frozen river, cautious, ears pricked, advancing one step at a time, alert to any impending cracks in the ice. What good counsel, tempering my enthusiasm and allaying my fears at the same time! I left the workshop having agreed to head the membership team.

How does a dream become a reality? I’m finding it takes two things: doing the required work (including lots of meeting and workshops!) while nurturing the first green shoots of community. My first social with other Oakleigh Meadow dreamers took place at Pen and Jim’s on Superbowl Sunday, where no one watched the game but all had great fun counting Madonna’s costume changes. Kai and Phoebe let me play Chutes and Ladders with them. That day marked the beginning of community for me. That sense of community grew when we spent a day sharing our individual visions of our cohousing community and arrived at four sentences that would become the foundation of our community vision statement. We were becoming “we”!

Images as well as words began to shape our sense of “we.” Jen, who cobbled together our first website, pulled a photograph of a sunflower off the internet to serve as a bright welcome to our homepage. We all loved it as both a contrast to the gray skies of the Oregon spring and a promise of sunny days living in community. The sunflower has become part of our logo, and we give away packets of sunflower seeds at our marketing events. Jen also posted the first blog, with a photo of an earth-constructed greenhouse that sparked our imaginations. Yes, we definitely want one of those in our neighborhood! Fantasies of neighbors from seven to 70 working together to build it represent the essence of living in community to me.

Then we hit our first bump: a workshop that went somewhat awry. The facilitator mentioned in passing a conversation she had had with our project consultant, who talked about discussing project feasibility with us at some time in the future. We were taken aback, and said so, because we felt we had already been assured that the development was feasible. Unfortunately, the facilitator chose to stick with the workshop agenda rather than allowing us to process what we perceived as a possible setback. We left the workshop with our confidence shaken. One household emailed the community the following week, drawing back from full membership.

At our next business meeting, we spent some time debriefing the workshop. I felt apprehensive, unsettled, uncertain. Then David spoke up. David and his wife Joan had purchased the site, and they dreamed a dream of cohousing which had become our Oakleigh Meadow group. David said, “This is great. Everything we’ve read told us we’d hit difficult times, and here’s our first one. How will we respond to it, I wonder?” I could feel my shoulders and my guts relax as I looked around the room and thought, “Oh, right, it’s just us!” After five months of working, eating, and playing with them, I knew these people, knew that we made good decisions together, knew that the wisdom of the group was something I could rely on. (And “feasibility,” as it turned out, is an ongoing evaluation routinely done by project managers, nothing for us to worry about. The household with cold feet became full members along with the rest of us on April 1, when the LLC was formed.)

Most of us begin a new venture with ideas about what it must offer in order for us to participate in it: deal-breakers. Mine was wanting a ground floor, single-level unit—not for any immediate reason but “just in case.” Other members of the group wanted a development with just a few units and lots of open land, or a community without dogs or chickens. As my sense of community grew, I found my “must have” beginning to soften around the edges. It became a “maybe,” something to consider within the context of the larger community. I witnessed the same process happening for others. Those who began by envisioning six or eight households on the site realized that, for many of us, this would make the project cost prohibitive, so their original vision began to yield. Those who abhorred the idea of living in close proximity to other people’s animals listened to dog owners willing to take responsibility for their pets’ behavior, and they began to recognize possibilities they hadn’t considered before. Seeing these shifts in perspective in myself and others inspired the first glimmerings of understanding how commitment to community affects orientation to one’s own preferences. They still count, but they now exist in a larger context which counts more.

At one point in our process, we spent some time articulating our values. It sometimes amazes me that what seems like a random group of folks coming together should share so many. Of course, we are not a random group of people. Cohousing and like communities attract people longing for connection and a more sustainable way of living.

Yet the bumps keep coming. Each one is unsettling, at least for me. Sometimes I find myself speaking with impatience and irritation in a meeting while others meet the turmoil with equanimity. Other times, it’s my turn to lend some calm and perspective to the group. Somehow, we seem stronger, smarter, and saner as a group than as individuals.

Most recently, the group spent an agonizingly long time choosing an architect for the project. Months of phone interviews with cohousing communities around the country that had worked with this or that architect took place. Many we spoke with wished they had gone with a different architect than the one they had. Some members of our group felt it crucial that we work with someone who would freely collaborate with us on design. These are the artists and architect wannabes whose passions are creativity and aesthetics. Others wanted to keep costs down and focus on moving the project ahead. These are the pragmatists and the business-minded members.

Tense meetings ensued. The process team utilized a number of formats to move our collective thinking forward: a fishbowl, a list of considerations to be ranked by importance, proposal discussions, and so on. Members voiced concern that the group would split, and one member even asked for a show of hands of those who would leave if their architect were not chosen. How did we move through this? I think each of us forged a unique path, yet we took our individual journeys in company with each other, and that made all the difference.

For example, not long ago I became quite frustrated at the seemingly endless architect-choosing process. The group seemed to be swimming in circles. I decided I could not invest further in the project unless “my” architect was chosen. I felt very justified in this, especially because I felt that several other households might also pull out. It seemed imperative to communicate this to the group somehow, but I also did not want to take responsibility for creating a split in the group. I posted a message on our online discussion board stating that I would support any decision the group made and then make a decision about my own participation in the community. I did this hoping it would further the conversation in a useful way. No one was fooled by my crafty dodge, however, and a deafening virtual silence followed. Oops!

The following week at our membership team meeting, Laura very tactfully remarked to the group that some conversations should not be attempted via postings. Since I trust Laura’s judgment, I immediately recognized that I had responded to the conflict within the group in a reactive, patterned way—by seeing my well-being as separate from that of the group, by moving to protect my self-interest without considering how that move might affect people I had come to care about. The next few days were uncomfortable ones for me. Was my desire for community a fantasy? Was I willing to stick out difficult times, or was I just in this for the warm fuzzies? What did I really want my life to look like, and how hard was I willing to work to realize that vision? Surprisingly, I eventually found myself feeling MORE committed to the cohousing group than I had before, more aware that I would get out of this venture in proportion to what I was willing to invest—not in dollars and cents, but in faith and effort.

At work recently, I attended a presentation on cross-cultural adaptation (I advise international students at the University of Oregon). The speaker referred to the writing of Young Yun Kim, who developed the “draw-back-to-leap” model to describe an individual’s progress in adapting to a new culture.

Kim sees humans as systems that, when confronted with a new culture, go through “disequilibrium” and then incorporate feedback to bring the “system” back into balance. It occurred to me that this model could be applied to most members of a forming cohousing community. We’re coming from a culture which values independence, self-reliance, and individualism, and moving into one of valuing group benefit over personal preference and teamwork over the solitary pursuit of happiness.

Kim’s model resonates with my experience in the Oakleigh Meadow Cohousing “culture.” Bumps occur, and I feel stressed out, overwhelmed, uncertain of my ability to cope. Over time, and with healthy servings of humor, my perspective evolves and I notice a change in how I think and act. At least until the next bump.

Community: it arises out of a longing for connection and is nurtured through shared work, laughter…and sheer tenacity. In its beginnings, the venture seems quite fragile, and yet its promise keeps us moving ahead. Are we delusional or visionary? Maybe a little of both, huh?