More Perspectives on Leadership and Followship 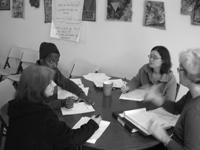 I love it when someone takes the time to break a complicated topic down into component parts that are easier to understand, and I like a lot of what Elizabeth has offered in her lists of leadership and followship traits. I teach about leadership, and so have spent a lot of time thinking about that side of the equation. Elizabeth’s done an excellent job of getting me to think about both sides, and I’m grateful. If I could sit down at my kitchen table with her, here are some things I’d love to chat about.

I found myself wanting to add some aspects to the leadership list. Mostly, it seemed odd to me that there was more focus on communication, integrity, and honesty for the followers than for the leaders. Being a teacher-type and a life-long seeker of great role models, I wondered from whom the “followers” would be learning all these great skills (as our mainstream culture is hardly great at them)? So here are my additions:

Self-honesty and the ability to recognize alignment. Effective leaders are ones whose passion matches the passion of the group. People turn into martyrs when their personal life’s work doesn’t match the group’s life work. “Know thyself” is a credo for everyone; for leaders, it is also an imperative.

Ability to hold to the group purpose and set aside one’s own agendas when needed. This is two-fold: being able to keep one’s self on track and not introduce extraneous agendas to the group’s work; and being able to hold the group to their focus, gently reminding people when they are starting to get too complicated or when they are adding aspects into the project that aren’t the group’s work.

The ability to nurture others. The best leaders are on the lookout for the next generation of leaders, and actively nurture the spark of enthusiasm and self-development in others. I’ve spent hours with interns and students over the last couple years talking about their lives and what inspires them, acting as elder and mentor. I’m starting to see this as a more matured version of my own leadership.

A willingness to model humility and the fine art of apology. When it comes down to it, some of the most important skills we can model are those that involve humanizing ourselves in the eyes of others (which makes leadership look accessible) and being able to admit when we’ve been (or done) wrong. Both of these are rooted in a philosophy that says that we are all human and we are also all capable of some form of leadership, despite our flaws and shortcomings. (Paired with Elizabeth’s sense of humor element, this is the cornerstone of authentic leadership.)

A strong sense of fairness. Sometimes leaders have to arbitrate tough moments where the people in their group seem to have contradictory needs. Leaders need to be even-handed in their rewards, chastisements, and division of resources. If you aren’t fair, you (rightfully) lose the trust of the group as a whole, and create an environment where your perceived “favorites” have to struggle to be seen as part of the gang. Responsible leaders don’t set up their group for the fissure lines caused by favoritism.

The ability to think ahead several steps. While I don’t buy into the “idle hands are the devil’s workshop” philosophy, I do think that when folks show up enthusiastic to work on a project and there is nothing to do, this experience can be pretty frustrating. A good leader has to serve the function of thinking things through in terms of timing, order of steps, and having materials and personnel available so that the work can continue and flow well.

While I like a lot of the advice that is offered in this article, I want to note a pitfall of adopting this whole package. The way Elizabeth talks about followship makes me nervous: while I don’t think this was her intention, the way she has things framed could be read as too much passive and potentially blind support of leaders for my tastes (particularly without a strong focus on integrity in leaders). On the other hand, groups sometimes want to switch in midstream, handing over power and then attacking their own leaders for wielding it.

Here’s my bottom line: if a group has abdicated power to a leader, then you damn well better back the person up. It is deeply unfair to hand over responsibility to one person and then hang them out to dry when you disagree with what they do or say. However, I prefer the model where you don’t abdicate and you therefore have the right and responsibility to call your leaders on bad behavior. While I don’t think this article is entirely one-sided in this area, I prefer to lean more on the active end of engagement between leaders and followers.

In fact, when it comes right down to it, I found myself wondering as I was reading this why the list of traits of leaders and followers didn’t overlap more. Strongly defined categories of “leader and follower” feel a little too dichotomous for my tastes—not what I’d like to see in an alternative culture. I’d like to see us all working on developing flexibility as a bottom line: be able to lead when it is needed and follow when it is needed, and do both with grace and a cooperative attitude. I like the philosophy that says that there aren’t “leaders” and “followers” but rather that these are roles that everyone plays at one time or another. “Leaders” are really the servants of the moment and role models for how to be a good human. Presumably, they once learned those skills from others and are now passing them along.

One of the places where I see us strongly agreeing is in this idea that leaders are human: they mess up, don’t think clearly all the time, and sometimes forget who and what they are serving and have to be reminded. Fear of messing up (and either feeling humiliated or being punished for it) is a huge factor in people being unwilling to step up to the plate and lead. Creating a kinder, gentler culture where power and leadership are shared, and where giving and receiving feedback are regular (and non-traumatic) events, can go a long way to making leadership accessible to everyone. Ideally, leaders are people you can look up to because they are genuine about their struggles and flaws as well as their passions, and unapologetic about caring and wielding power in service to your shared goals. Leaders are best when vulnerable; this is possible when the culture makes that safe. Everyone in the group has responsibility for creating that culture.

Finally, I’d like to touch (briefly) on a largely missing topic, which is power in cooperative groups. Traditionally, power is seen as residing in leadership. While this is certainly true, it isn’t the whole truth. My theory is that there are many different types of power, some blatant (like who is leading the project, who has a lot of social capital because of past good deeds, and who has expertise) and most more subtle. This subtle list includes a lot of territory: Who neglects to read the notes ahead of time, and then gets the whole group to tell them everything they should already know, wasting 15 minutes of everyone’s time and getting a lot of attention? Who is really good at getting folks to pick up their slack? Who is really good at honesty? Who isn’t? Who is really good at fun? Who is internally strong and has power because they don’t need to be coddled? Who does need to be coddled, and takes energy from the group to get their personal needs met? Who rarely speaks, saving up their input for times when it is likely to be more influential?

Instead of asking, “Who has power?” I’m more interested in the question of how each person within the group gets and wields their power. The list of things above that are examples of types of power are (mostly) things that can be used for either good or ill in a group. Power itself is necessary to get things done, and neither good nor bad. And I believe that everyone has some power in a cooperative group (and that claims to complete powerlessness are themselves a form of wielding power, because no cooperative group wants to be accused of that depth of power imbalance and will generally bend over backwards to not have that impression persist).

Here’s the kicker, though, and the one addition I’ll make to Elizabeth’s basically sound list of follower traits. Because leaders generally can’t effectively lead a discussion about their own power in the group, good followers will occasionally bring this topic up. (This could just be an addition to the list of other important topics Elizabeth suggests groups grapple with.) The purpose of this conversation is not to drag down the leaders, but to encourage an even-handed consideration of how the group wants to relate to power in general, and how well everyone is doing with taking on their share of both power and responsibility. If a “follower” can successfully serve the group in this way, they’ll be well on their way to blurring the lines between leadership and followship, and that is all to the good.

One Reply to “More Perspectives on Leadership and Followship”

I think this is a wonderful response to Elizabeth’s words and adds depth and “”width”” to the discussion. The roles of leader and follower are not necessarily even the best to look at; perhaps there is facilitator and facilitated, or perhaps all are leaders either from the center or from teh top (or the front); or perhaps we can look at who is choosing to be at cause or who is choosing to be at effect in a given situation.

The list of passive-aggressive behaviors from followers is astutely observed. Now what ways forward can be designed to handle these possibilities and keep focus? what would be the ideal way of handling everyone’s needs?

Lastly, the question of what to do when people show up for a project and there is no work to be done–what ways of being helpful exist that don’t need to be pre-planned, that can be engaged in in cases when the “”leader”” has not had forethought?

And how can IC be the most useful everyday resource?

Thanks for addressing these issues.