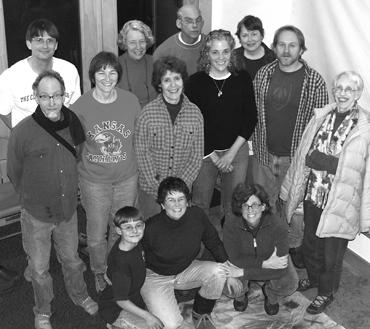 The famed Harvard biologist, E.O. Wilson, has said, “The epic of evolution is the best myth we will ever have.” Wilson joins a chorus of voices calling for us to reclaim our story, our 13.7 billion-year-old evolutionary and ecological identity. Spatially and temporally, humans don’t end or begin at our skin. We are woven into a vast and ancient web of relationship. We personally and collectively feel the reverberations of all that heals or harms that web.

What if a community of people organized themselves around this unfolding myth? How would they impact their bioregion? How would their own lives be impacted? Six years ago, a group of people, varying in ages and backgrounds, met in a living room in Lawrence, Kansas, to find out. The current gathering of 16 people, which we call Kawsmos (a nod to our local Kansas or “Kaw” River watershed and the Kaw Nation that once inhabited the area), has organized around three core values.

The first, New Story Telling, says we will engage the insights of cosmology and ecology in artful and provocative ways. We study and discuss the teachings of Thomas Berry, Brian Swimme, and Joanna Macy, to name a few. We take field trips. We perform and create eco-rituals. We write and perform science-as-theater, dramatizing key moments in evolutionary history, such as the emergence of photosynthesis. The group explores cosmic and earthly interactions and connections through collaborative painting and embodies them through dance.

Our second value, Quality of Interaction, distinguishes conversation from mere discussion. Conversation—literally being-in-company-with—honors silence as well as words; it asks participants to be aware of not only their own internal feelings and thoughts but also those of others who might be more reticent to join the stream. Fundamentally, authentic conversation aims at the mutual discovery of wisdom—both the Earth’s and ours. All of us are responsible for creating a safe space for fully inclusive conversation, risk-taking, and play. Practically speaking, a rotating planning group arranges and facilitates our monthly meetings.

Third, we value Enactment within the local socio-ecological community. For example, given the urgency of climate change, we decided we could not simply wait until alternative energy infrastructures materialized around us. Our planning committee made the timely suggestion that we reduce our collective carbon footprint. To narrow and focus our efforts, we decided to tackle our electricity usage. The resulting two-year energy reduction and awareness project we called “Lighten Up.”

With some initial quakes and flutters, we committed to forwarding our monthly electric usage numbers, for the previous twelve months and each month to follow, to a member excited by tracking these statistics. We agreed this wouldn’t be about guilt or competition, unlike the programs of a growing number of utility companies around the country, such as the Sacramento Municipal Utility District. We weren’t going, as they did, to draw frowny or smiley faces on each other’s monthly utility bill. (Kaufman) But we knew changing light bulbs wouldn’t be enough. We would need to make some fairly substantial lifestyle changes if we wanted to achieve meaningful reductions. We collectively made this commitment to our bioregion and each other on the cusp of the hothouse swelter of a northeast Kansas summer. Should we lose our nerve, we needed only to look at the long trains of coal daily rumbling to the power plant belching at our city’s edge. We needed only to remember a 10-year-old among us who volunteered to read his bedtime books by candlelight.

Some of us knew how difficult this would be. We held our tongues when a menopausal member wondered aloud whether she could survive without air-conditioning. We already knew how asexual, yet creative, everyone would become by high summer.

As expected, we sometimes arrived at meetings haggard and glistening like fellow survivors of a shipwreck. “One of my favorite chairs is molding,” one member sighed. Another confessed to succumbing to a wall unit after a string of 100+°F days. Coming home to an un-air-conditioned house after working in an office cold as a refrigerator felt like inviting a heart attack. Everyone tried to stay upbeat. It wasn’t bad if you didn’t move.

This isn’t the kind of experiment you want to undertake alone. For instance everyone had a vested interest in one member’s research about airflow. We learned which windows to open depending on sun position and wind strength and direction, when to turn on a window fan and when to leave it off. We found that window fans can be just as effective at cooling a room as a window unit air-conditioner. We all said farewell to another fiercely held myth about air-conditioning when we discovered that even on the hottest of days, leaving the A/C on all day consumes more energy than turning it off when you aren’t home and turning it on when you return. To our manifest surprise, it doesn’t take that long for a warm house to cool down again once you do turn the A/C on. “This whole project makes you think and negotiate,” said one couple. “You have to decide when to sleep, where to sleep. I’ll admit, we still have arguments about what works best. And when you’re hot and sleepy, you don’t want to argue. But ultimately, you can deal with it. You just have to be open to changing the way you do things, adjusting blinds, staying quiet in the afternoon.” Yes, it was stultifying on some nights, but we all knew that in a few days, it would be bearable again. In fact, pre-meeting potlucks often focused on the weather. Like farmers, we stood in small circles speculating about fronts. We communally rejoiced when they blew in, often purple and green with rain, cooling our skin and breaking our fever.

“We just had to turn on the A/C one week,” the most stalwart of members lamented. “The heat we could take but heat with humidity—we thought we might die, really. But then the air felt unnaturally cold, and we missed the night sounds, cicadas, crickets. It was too quiet. We felt isolated. It makes me wonder how many summers I’ve missed.” Everyone agreed that it helps knowing that, all over your town, you have a core group of others sweating, tossing, turning, and being lulled finally to sleep by the same creatures outside your bedroom window.

For some, the experiment had everything to do with the long-lost art of frugality. “I’m an empirical person,” said one member. “I don’t like giving my money to utilities, so I turn the lights off when I leave a room, and I turn the heat down when I’m away. I retired early, and even though I get a pension, I need to watch my money. I want to live my life so that the quotidian stuff is basic, so that I can save for things I really want to do like take a trip to Machu Picchu.” One member is in the process of replacing some of her electric appliances, such as her coffee grinder, can-opener, and hand-drill, with human-powered ones of the past.

Always in the back of everyone’s minds were the numbers. We depended on each other to keep these numbers in check. Ethical dilemmas arose. Friends with a new baby showed up on one member’s doorstep holding a gargantuan sack of wet diapers and asking to use her long dormant dryer because theirs was on the fritz. She had to think twice. “I sat in the light of an organic-soy-based-made-in-a-100-percent-solar-powered-factory-candle, martyr that I am, and felt the kilowatt hours ticking away.” A low point for another couple came when they got their first winter electric bill. “It was really, really bad. We had a new hot tub, but we didn’t have it on the economy setting. After all that work, in just one month, we’d blown our savings. It was an “aha!” moment.” A wildlife rehabilitator in the group admitted her spring numbers were up because she’d had to leave a heating pad on continually for a group of neonate opossums whose mother had been killed by a car.

One member constructed a three-dimensional display of wooden coal cars stacked on pegs to represent our monthly electricity usage. Visualizing our personal electricity use as actual cars of coal was essential motivation in the face of small discomforts. With each coal car representing 1000 kilowatt hours of group energy usage, we could easily digest our impact.

In the end, consensus was that “Lighten Up” had been far less painful than any of us had imagined. Collectively, we had reduced our consumption by 25 percent. We had survived—thrived even. As we watched Kansas Governor Kathleen Sebelius tenaciously veto bill after bill that would have allowed construction of two 700-megawatt coal-fired power plants in the state, our experiment became all the more meaningful. Kawsmos has moved on to other projects, but we continue to collect and examine our electricity usage and are eager share our experience with others. We grow together as a community, energized by working collectively to reclaim our story.

How the Kawsmonauts Lowered Electric Usage

Here are a few things Kawsmonauts did to lower electric usage:
• Installed attic fans.
• Installed exhaust fans.
• Added awnings.
• Used thermal drapes or blinds.
• Installed programmable thermostats.
• Replaced aging appliances with Energy Star models.
• Used ceiling fans and turned them off when humans or pets weren’t in the room, since they cool only living things not air.
• Used a combination of water mister and fans on warm nights.
• Retreated to the basement on summer afternoons.
• Put appliances on power strips and turned them off when nothing was in use.
• Cooked outside during summer (i.e. rice cooker, crock pots).
• Used microwaves, especially in the summer.
• Used pressure cookers, which cook quickly and have the added benefit of not adding heat to the room.
• Switched to compact fluorescent bulbs.
• Hung clothes on indoor/outdoor clotheslines.
• Closed and opened blinds as outdoor temperatures demanded.
• Installed insulated, reflective paper in attic.
• Used weather stripping.
• Used flannel sheets in the winter.
• Used bamboo sheets in the summer.
• Left hot water in the tub after a bath in winter to raise room temperature and humidity.
• Painted houses a light color, since we’re in a Southern zone.
• Used solar/crank radios.
• Used analog telephones.

Filed Under: All Blog Posts, Communities Articles, Community Where You Are, Issue 143, Sustainability