Journeying on the Ark

Performers take the stage in a L’Arche Daybreak Gala Event featuring artists with and without intellectual disabilities. 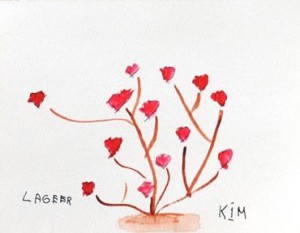 Artwork by a core member at L’Arche Daybreak. 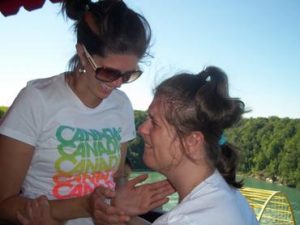 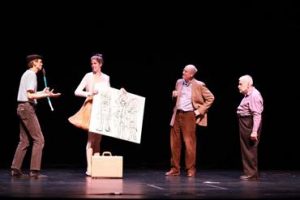 Pilgrim,
when your ship,
long moored in harbour,
gives you the illusion
of being a house;
when your ship
begins to put down roots
in the stagnant water by the quay:
put out to sea!
Save your boat’s journeying soul
and your own pilgrim soul,
cost what it may.
—Dom Helder Camara
Boarding the Ark

I have been serving as a live-in assistant at L’Arche Daybreak (Richmond Hill, Ontario) for the past year and a half, which means I have been creating home with assistants from around the world and core members (individuals with intellectual disabilities). In my home there are four core members and four assistants. L’Arche is an organization that seeks to provide safe, nurturing homes for individuals with intellectual disabilities, honouring their unique value and vocation. The word L’Arche means the ark in French, which has been described as a place of refuge and of safety from the flood in various L’Arche documents.

Moving into L’Arche, I brought openness to intentional community life and to learning in and through relationship with core members and assistants alike. I came excited to be a part of a community of difference. I saw responding to the needs of core members as an important part of building community, and was eager to live out Jean Vanier’s invitation to sacrifice my own freedom while building relationships based on mutuality, handing over power, claiming (significantly) less space, making peace with difference, and honouring/celebrating the core members.

Mooring in the Harbour

While I started off with a lot of momentum, it wasn’t long before I realized supporting the value and vocation of the core members was serious business. As a live-in assistant, I was trained to provide extensive physical, emotional, social, behavioural, and spiritual support for approximately 60 hours a week. Assistants in my home were encouraged to be physically present to the needs of the core members throughout the day, and advised to listen, learn, observe, and respond to their offers if we wanted to build trust. Assistants were also encouraged to see the core members as the true artists and visionaries while sacrificing their own freedom and practicing self-control. This meant core members had individual support from 7 a.m. to 10 p.m. with assistants on hand to interject at the first sign of a core member becoming sad or angry. Assistants were directed to counsel, comfort, console, or offer to pray with a core member to de-escalate a situation or prevent a core member from having a verbal outburst. Looking around the house, there seemed to be correlation between supporting the core members and stroking their hair, sitting directly beside them, and responding to their every comment, tear, yawn, sneeze, question, or complaint along the way!

Living in a gentle, conflict-free space proved tiring. I questioned how the philosophy of L’Arche was being played out, and was skeptical of whether or not it was in the best interest of the core members. I started to think the philosophy of care fostered dependency, stifling the growth and expression of the core members. I recognized many of the core members had complex needs and would benefit from having assistants trained in more than befriending. I didn’t think it was healthy for assistants to be meeting the relational and emotional needs of the core members (without establishing healthy boundaries or facilitating opportunities for connection outside of the home). I started to believe it is possible and crucial for all people—with or without intellectual disabilities—to confront parts of themselves, manage their own emotions, meet their own needs, and listen to their inner voices without always having an assistant—albeit a needy one—to thank. I was uncomfortable shielding the core members from pain, and uncomfortable living in a fantasy land.

As someone who values independence and individuality, I should also fess up I found myself burnt out from continually providing excessive care and continually being in relation with others. I felt like a being-for-others, which, quite frankly, blends well with Freire’s definition of oppressed (see Pedagogy of the Oppressed, Paulo Freire, 1968, 1970). I felt small, silenced, and stifled.

I hated living in a dream land, and became bored dwelling in peace, safety, and security. I resented heralding the voices of the core members, and resented a community ideal that saw assistants refusing to insert their identities into the space, and withholding their “I believe” and “I think” assertions in the presence of those with disabilities. I was saddened that those with disabilities were not having the opportunity to encounter real people—the wrath of authentic, fully alive, fierce, creative, beautiful people. I hated being in a space where self-control trumped self-expression, and where the stories of assistants centered almost exclusively on what they had learned from L’Arche or the core members. I found the philosophy disempowering.

I yearned to tell my own story, and to open myself up to the stories of others. As Jeanette Winterson wrote, “I was not being myself, but I didn’t know how to be myself there. I hid the self that I was and had no persona to put in its place.” (Why Be Happy When You Could Be Normal?)

Putting Out to Sea

Serving at L’Arche was a painful process that saw me doubting my own capacity to care, feigning diplomacy, and struggling to remain open to the community and to those telling me to “die to self.” It was a delicate dance, but with much frustration and even more reflection, I gradually came to some pretty great revelations about myself, about caregiving, and about community-building.

Being thrust into the position of caregiver at L’Arche challenged my self-understanding. I found myself yearning for space to collaborate, insert my identity, and share my true self. I found myself becoming empathetic toward others in caregiving roles, and more attuned to fellow assistants who were disconnected from the work and scrambling to form their own identities (in their limited time away from caregiving). I now believe assistants, like myself, could provide better care if we had outlets for telling our own stories, making our own meaning, developing our own talents, having power, having intimacy, taking ownership, and working toward mutual liberation. Being whole means giving the gift of the self—not emptying the self.

While L’Arche promises spiritual becoming in exchange for labour, I would argue caregiving has little to do with spiritual becoming. I think spiritual becoming means exchanging the self, which happens in moments of mutuality along the way. It can be a part of caregiving, but I think seeing caregiving as a compassionate act or as something others deserve undermines the services being provided. I believe working toward a balance that is mutually liberating and life-giving for assistants would better support the core members.

When it comes to responding to the needs of core members, I also think assistants could benefit from learning more about the importance of emotional and creative expression in their own lives and in the lives of core members. Self-advocacy hinges on core members developing their capacities to lead, tell their own stories, enter into dialogue, honour their emotions, and demand justice. Prophets were known for angrily demanding justice, and anger is an important emotion that can be cultivated for good.

Maintaining a gentle web doesn’t necessarily support the growth, expression, and independence of anyone and often leads to dependency. Encouraging emotional and creative expression is essential for engaging in life, building/restoring relationships, linking one’s life with others, and journeying against, toward, and with others.

Irving Zola writes that disability demands “a continuing effort to reclaim what we have lost: the right to act sexy, get angry, be vulnerable, and have possibilities.” My hope is that as I weave my way in and out of community I can co-create spaces of difference where people with and without disabilities can fully embrace the self, inviting sex appeal, anger, vulnerability, and possibility into the conversation. I believe in honouring the voices and identities of myself and others. I also hope to connect with others who are navigating issues of identity, process, and power while telling their own stories and engaging their social imaginations. Recognizing I’m called to become an individual in community, to stand up for justice, and to assert my true self into the world might just help me to move forward, grow in self-understanding, care for myself and others, and build community while offering something authentic into the world.