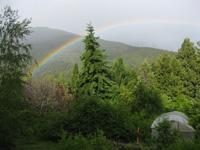 Growing a Culture of Gratitude in Argentine Patagonia 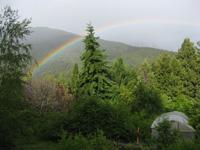 Located in the Lakes District of Argentina, El Bolsón is host to many rainbows, such as this brilliant vignette over one of Wunjo’s greenhouses. 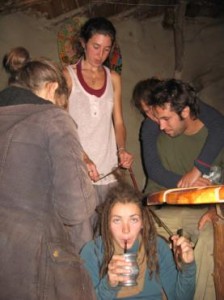 From left to right, Juliane, Gabriela, Camila, and Eric help dread Asa’s hair while she sips maté in the community kitchen. 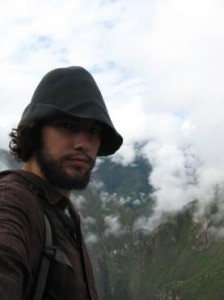 The blanket was crowded with little squares of cloth. Each held a handful of corn, quinoa, wheat, vegetables, herbs, fruit, nuts, or honey. Wild lupines, roses, and other flowers formed a vignette around the colorful spread. One by one, we began to throw it all in the fire.

I had traveled to South America to learn the basics of organic farming through a program called World Wide Opportunities on Organic Farms (WWOOF). Now, in Argentine Patagonia, I had immersed myself in a culture of growing. As the smoke from our offerings drifted up into the canopy of coihue trees, the other volunteers and I exchanged confused looks. Our farm hosts, a young couple seated in the circle beside us, continued the summer solstice ceremony by passing around a seashell filled with smoldering incense. They asked us to voice our gratitude. Supermarkets were not among the things for which I said thanks.

WWOOF is a program for which anyone interested in an affordable cultural experience can be thankful. The format is simple: volunteers work in exchange for meals and a place to stay. In 1971, the program was started in England to provide access to the countryside. Today almost 100 nations accept WWOOF volunteers in North America, Latin America, Africa, Europe, the Middle East, and throughout Asia. At the WWOOF website, one can buy an inexpensive membership (I paid $45) which includes a current list of all the farms accepting volunteers in the chosen country. I picked Argentina.

In early December, I hopped off a bus outside of El Bolsón, a small town in the Rio Negro province of Argentina, with my long-time friend, Asa. We stood with our backpacks in the cloud of dust from the departing bus and stared at the wooden sign. Wunjo, the farm was called. We had sent volunteer requests to over 20 farms and Wunjo was the only one that responded. From a few email correspondences with a woman named Gabriela, we knew that the people here needed help gardening and building a house, that we would sleep in tents and eat a vegetarian diet for the next month.

Inside the gate, a cat was dozing in the grass just outside the perimeter of a sprinkler. A few minutes passed until a shirtless man walked up and introduced himself in Castellano—Castilian Spanish—as Luigi. He led us down a dirt path and through a grove of cherry and plum trees to a small adobe building. There we met Gabriela and the handful of other permanent residents of the farm. They were placing the last tiles into the mosaic floor of the newly constructed community kitchen. Wunjo had only begun accepting volunteers one year before, in 2009. Except for one German girl, we were the earliest volunteers to arrive that summer.

Anxious to demonstrate our work ethic, Asa and I offered to help, but Gabriela handed us plates of potato salad and, in broken English, suggested we relax. Sitting beneath racks of drying herbs, we ate in silence, acutely conscious of the language barrier. After we finished, Luigi showed us where we could pitch our tent, and how to use the bathroom, a dry outhouse designed to turn human feces into fertilizer by mixing it with wood shavings.

The learning curve was steep. But within a week, our Castellano had improved and we settled into a routine. Each morning, the 8 AM breakfast was announced with the blowing of a conch shell. We ate meals together in the community kitchen—a hubbub of playing children, begging dogs, the grandmother’s dream interpretations, unexpected guests, and maté-fueled discussions about the daily agenda. Then, we worked. Our efforts were split halfway between gardening and building a house of almost entirely natural materials.

More volunteers arrived to help, among them Eric Ferrer, 29, from Bordeaux, France. Ferrer had previous experience working on WWOOF farms in Europe and India before he traveled to Argentina.

“As a carpenter, I wanted to learn about natural construction more than anything else,” Ferrer wrote via email after staying an extra month at Wunjo. “I feel like I learned some good things. I realized that we can build our houses with a lot of energy and just a little knowledge—more or less—and that everything doesn’t have to be square and straight to have a good-looking little house.”

Though it has not received much press outside of Argentina, El Bolsón is the setting for a natural construction movement. The house we helped build reflected the—for lack of a better word—hippie ethos of the Wunjo. The house blueprints were chalk sketches by its soon-to-be inhabitants, a single mother, Brisa, and her two young sons. The support and crossbeams were all roughly hewn tree branches and trunks. As a result, there was hardly a right angle in the whole house. Following Brisa’s vague directions, we used wire and nails to install glass panes and wine bottles as windows. For insulation, we poured a mixture of water and clay over piles of straw, then stuffed it by the handful into networks of baling wire in the walls. Once it was dry, we added a smooth layer of grey adobe. By lunchtime at 2 PM. each day, we were invariably smeared with clay from head to foot. Moreover, the disorganized work would aggravate our Western sense of efficiency.

Not until everyone at the farm sat down together to talk one day, did I begin to understand what I was learning. A few of the other volunteers, including Ferrer, expressed a sense of urgency to accomplish more in the garden and the construction of the house. Luigi, Wunjo’s head carpenter, listened until they had finished. Then, he put our lesson into words. He said the garden and the house should come second to personal work. I was stunned. As an American, no “boss” had ever said something like that to me.

In the following weeks, I started unlearning to worry. I began to enjoy work and, as a result, accomplish more. The strawberry patches were soon completely weeded. In less than a week, we insulated all the remaining walls in the house.

In addition, I began to understand the people and how their views on modern culture had compelled them to start a sustainable community. I was progressing in a different kind of education.

Other volunteers also experienced unexpected growth. Juliane Damm, 22, from Chemnitz in Saxony, Germany encountered a culture at Wunjo that made her rethink how people live in Western society.

“The respect between people at Wunjo was good to see,” Damm wrote via email. “I always wanted that to be the ideal way for people to interact, but at the same time thought that it wasn’t possible. After some weeks at Wunjo, I got a kind of quietness within me that told me that it could be possible.”

Granted, we did exchange modern worries for more rustic ones. The earthworms that occasionally flopped out of the faucet in the kitchen sink still disturbed me. When Brisa’s four-year-old son would bring us maté during work, I found it difficult to trust that he would make it up the rickety wooden ladder barefoot holding a thermos of hot water. The oven door, it seemed, needed hinges. Not only was my “common sense” continually challenged, but a part of my heart, like the oven door, had unexpectedly fallen open.

The greatest challenge snuck up on me in my last week at Wunjo: I realized I was in love with this place and I didn’t want to leave. I had never before lived in such an intimate community. My childhood neighborhood was a suburban maze of strangers. Sadness washed over me to think of returning to the default world. I found myself unable to explain these melancholy feelings even to myself, much less other people.

I went into the forest to meditate. The afternoon tree shadows had drifted into zigzag shapes when suddenly I remembered that Gabriela had taught me that the word “Wunjo” comes from the Old English rune for “Joy.” Joy! I had tasted it and it would forever live inside me. Leaving Wunjo was not back-tracking into the default world. Rather, I would be venturing out to share the joy of community culture that I had experienced here. Now, I knew.

I returned from the forest determined to give back to these people who had given me so much. I volunteered to cook dinner. Cooking a vegetarian meal for 12 people using a wood fire and river water, all the while communicating in rapid-fire Castellano, is the kind of challenge I had traveled to Argentina to encounter. The dinner table is where culture and agriculture truly converge. Before we ate, it was a custom at Wunjo to say a prayer of thanks. That night, and every night since, I’ve felt grateful just to have been there.

For more information, see the Wunjo blog and the WWOOF website.