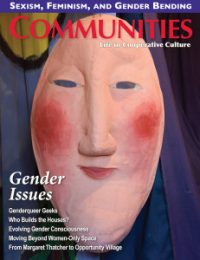 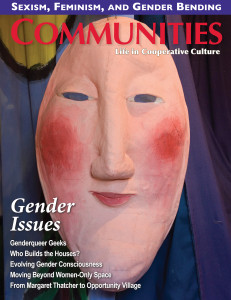 On This Episode of “Girls with Tools”… By Cole Wardell

At The Midden, members confront the effects of patriarchy not only in their outside activism, but also within their community.

Unconscious gender-related expectations, inequities, and trauma can exert pervasive influence even in groups committed to undoing them.

At a community founded in feminism, a member suggests that strategies like corrective discrimination, single-gender gatherings, and prioritizing “gender balance” may themselves be sexist.

Who Builds the Houses?: Gender in Eco-Communities By Jenny Pickerill

A researcher finds that men still dominate building in eco-communities, and offers strategies to empower women.

Gender-Bending on the Commune By Valerie Renwick

When a Twin Oaks member leads a tour, “co” must “address the dress” (when appropriate) and wear a shirt, whether or not participating in the collective menstrual calendar.

Trichomycosis axillaris can be the pits, causing even die-hard feminists to shave.

A genderqueer member helps a community move beyond its past assumptions by offering workshops on exploring and expanding concepts of sex and gender identity.

In this interest-based intentional community, it’s easy to forget that not everyone is queer and geeky.

When gender is self-created, self-defined, and self-sustained, people, as well as community, flourish.

Feminist Spirituality and Gender: Lessons from Beyond Women-Only Space By Mary Murphy

Does the culture of women-only space still serve a worthwhile purpose, or does it perpetuate division? A long-time leader of women’s circles advocates inclusivity.

Community presents many opportunities for working to dismantle sexism—through action, not just through speech.

My Gender Journey, in Family and Community By Luke Byrnes

Raised in a homophobic family, a new communitarian finally finds a safe space to explore gender and sexuality, even as his community works to overcome gendered biases.

An Apache childhood lays the groundwork for a lifelong dedication to cultivating self-esteem and personal wholeness in community.

Margaret and Me: The Iron Lady Becomes an Unexpected Ally By Andrew Moore

A squatters’ housing cooperative activist describes how Margaret Thatcher broke with her image to support an early “occupy” movement.

Notes from the Editor: Gender: Is There a “There” There? By Chris Roth

The intensity of community living can bring issues of gender, sexual identity, and gender relationships to the fore as nothing else does.