From Conversation to Community: How a Bunch of Mates Bought Some Land Together 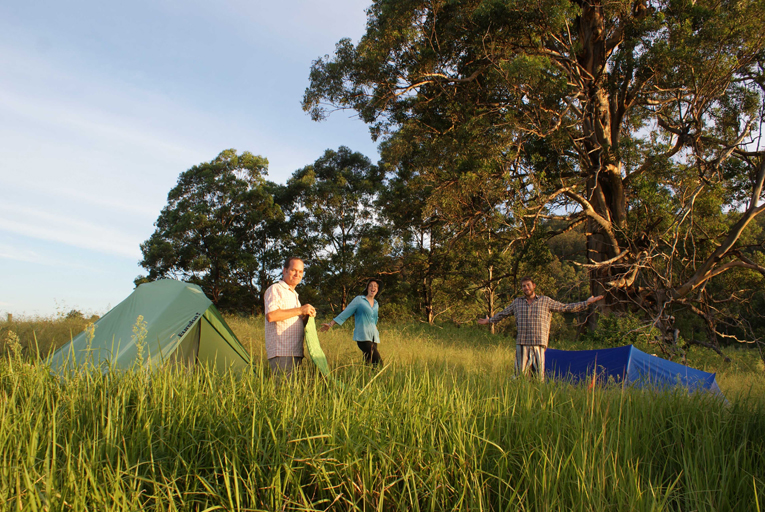 Have you ever found yourself sitting around with a group of friends saying “wouldn’t it be great to buy a block of land together in the bush?” For years, my life partner Jemma and I found ourselves having the same dinner party conversation, yearning for something more than nuclear family life in the suburbs.

Eventually, we decided that we should actually do something, or else stop talking about it. This is a story about what unfolded. I say “a” story, because each of our co-conspirators has a different one as our lives have come together to share the exciting journey and our connection to the beautiful place that we call “Black Bulga.”

Our first step in taking this idea seriously (sometime in 2006) was to organise a Sunday lunch with the friends we had been discussing the idea with. Out of that lunch came an agreement to spend a weekend away together in the country to kick the idea around. We were explicit that there was no pressure, and no expectation that this group of people would do anything together other than exploring a conversation.

After two separate weekends of staying in lovely farmhouses, eating delicious food, drinking too much wine, and traipsing around the countryside looking at properties, it was clear that this was a group of people with very different ideas and expectations. Out of the seven of us who spent those weekends together, only three of us seemed to be looking for similar things.

Michael, Jemma, and I kept the conversation going. We shared a common connection to the Hunter Valley and over the course of the next couple of years, spent a number of weekends exploring the foothills of the Barrington Tops World Heritage Area. We read books on intentional communities, visited as many communities as we could find, reached out to friends of friends who lived in the Barrington Tops area, and began to get a sense of what kind of properties were out there. All the while we kept floating the conversation with other friends who we thought might be interested in the idea.

Our friends James and Danielle decided to come down from Brisbane for a weekend of exploring places and ideas. They both had Newcastle roots and had a long-term dream of rural landsharing and intentional community. James has spent much of his life as an environmental campaigner and activist educator and had a strong vision of creating an activist training centre. Dan works as a communications professional with a passion for visual arts, and she was excited about the creative potential of this kind of project. Other friends dipped in and out of the conversation over this time but by the start of 2008 our group of three had grown to five.

Jemma and I moved up to Newcastle to be closer to her family when Rosa, our first daughter, was born. We were infected with the madness of first-time parents and bought an old terrace house in Cooks Hill, which we proceeded to renovate. During winter, when we had no bathroom, our friends Geoff and Deb came to our rescue and offered hot baths and warm soups. I had known Geoff for years through his work with the Minerals Policy Institute and Greenpeace, but it was through this period that our friendship deepened and we got to know Deb. Geoff had just completed his Ph.D. into how to develop a “just transition” away from coal dependence to sustainability in the Hunter Valley, and Deb was embarking on her own Ph.D., exploring the challenges of educating boys. Over the course of many lovely evening discussions (in between having hot baths and soothing a newborn baby) we discovered that they were also seriously interested in the idea of co-owning a block of land in the Hunter Valley. Our group of five grew to seven.

It was during this time that Jemma and I met a young carpenter by the name of Steve who was passionate about sustainable building. We asked him to help us with some of the structural work on our renovation and Steve and I spent a few days working together. It turns out that Steve shared a similar dream of buying land together with like-minded people, but he felt he was a long way off being ready for that kind of project.

Sometime in 2009, after Jemma and I were back in Sydney, our group of seven spent a weekend up at Wangat Lodge, near Barrington Tops, to explore the land-sharing idea and to look at properties. We shared our dreams, hopes, and fears, discussed criteria for land, and explored the kind of legal arrangements that we would need to do this kind of project. By this time, Jemma, Michael, and I must have looked at every rural property for sale in the entire district, and the local real estate agent was starting to get pretty weary of us. But all of a sudden we found ourselves looking at a property that ticked all of the boxes. It was magnificent: stunning views, a creek, cycling distance from Dungog and the trainline to Sydney and Newcastle; it had a six bedroom house, large shed, and two rental cabins already built. The only problem was that it cost close to a million dollars.

We quickly figured out the maximum that each of us could afford and worked up a business plan. We needed 16 people to make it work financially. We put the word out to our closest networks. James called a friend and colleague from Brisbane. After hearing about the place and who was involved, John (Jmac) pretty much said he was “in” over the phone. Another friend (James A.) from Sydney did the same thing. I called Steve, who by this time had become a good friend, and he came up to check the place out. Geoff and Deb reached out to their friends Matt and Sarah who also came up to see the property.

All of a sudden we had reached critical mass—we had a vision, a great group of people, and fantastic block of land. We scrambled to make it happen. We put up $2,000 each and engaged a lawyer from northern New South Wales who had experience setting up rural landsharing projects. We started negotiations to buy the property. Our dream was about to become reality. In our minds, Jemma and I had moved to the land and built our dream house already…until we got gazumped. While we were rushing to get our constitution in order, somebody else bought the property from right under our nose. It was gut wrenching.

In the weeks after we had found the property, we had rapidly turned an idea into a serious project with a clear vision, a legal structure, and a business plan—but with no land and a great deal of disappointment. We regrouped and kept looking.

Without a real place to ground the project, it became increasingly difficult to maintain momentum. Intellectually, it seemed far more sensible to develop the group, the legal structure, the plan, and a clear set of criteria before finding a block of land, but practically speaking, it was all starting to feel a bit too abstract. The financial model and the vision were invariably going to be different for each different property, depending on cost of the land and the existing infrastructure. We had a long list of agreed “criteria” but Jemma and I kept on coming back to “the vibe” as being the most important thing.

We soon found another property that seemed to fit the bill and we once again started to develop a vision for how our project could fit that piece of land. We ended up in the awkward situation of having half of our group really keen to buy it and the other half not. We spent a weekend there together (where the cicadas nearly drove us all mad) which ended with the difficult and quite stressful decision not to buy it. We began to doubt that we’d ever find another place that everyone liked.

In the aftermath of that weekend, I was up late one night scouring the online real estate listings once again and came across a new listing that looked too good to be true. Jemma, Rosa, Deb, and I headed up there the next weekend to take a look.

We arrived at the property and the real estate agent took us straight to one of the most beautiful swimming holes we’d ever seen, at the confluence of the Karuah and Telegherry rivers. And it just got better from there. From the ridge we could see dramatic wilderness for miles and a landscape that invited us to explore the valleys and folds of the rolling mountains. The river flats of rich alluvium had an abundance of water from a gravity-fed irrigation system coming out of the neighbouring conservation area. And the rivers…oh the glorious rivers…where you could swim with your mouth open and drink deeply of the crystal clear waters.

As we left the sun-drenched ridge on that first visit, we knew we had found the place we had been looking for. An eagle soared overhead, and Rosa grinned a delicious blackberry-stained grin as the wallabies hopped away through the paddock. And so we began the journey to becoming custodians of the land that we have come to know and love as Black Bulga.

John Hepburn is a founding member of Black Bulga Intentional Community in the Hunter Valley, New South Wales, Australia (www.blackbulga.org.au). Black Bulga is currently looking for new members; email [email protected] if interested. This story is adapted from an article John posted on his Facebook page in March 2014.