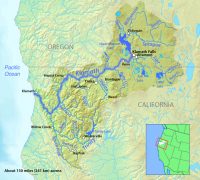 Eight years ago, when I moved out to the West Coast for the first time, I wasn’t yet aware of the intentional community movement. I’d always imagined living collectively, but it wasn’t until I learned about Black Bear Ranch – through a documentary called “Commune” – that I realized communities like it actually existed.

In 2010, I sent them an e-mail asking if I could visit, and announced to my friends that I was going to take a – possibly one-way? – trip to Northern California. I never did make it there, but I’ve since encountered many people who have lived at or passed through the ranch. Notable both for its longevity – it was founded in 1968 – and its ownership structure – a land trust – it remains one of the highest-profile communes in the U.S.

This month, some former members called on the ranch to help “unsettle” or “decolonize” the Klamath River. They write that the ranch has become a kind of gateway to the region, attracting more and more settlers who buy up property and displace native residents:

“One of the things that many local Indigenous people have expressed to us, is that the number of settlers here on the rivers has gotten out of control over the years and that there are so many of us here now that Indigenous people have literally become ‘homeless in the homeland.’ The institutions and entities that continuously bring settlers to the river have become known as ‘portals.’ Some of these portals are AmeriCorps, farm internships, the pot economy, the Forest Service, and Black Bear Ranch.”

It’s not that the ranch itself has been destructive to the region, the writers say. In the decades since its founding, it has been a home to many people, and created friendships between Black Bear residents and Indigenous people. The writers believe that repatriating the land would be the best way to honor its history:

“It is exactly because of the radical consciousness of the Black Bear Family that such an act might be possible…. By taking this action and returning this land-base to the Indigenous caretakers of this watershed we could truly be a model for the world, in an ‘on the ground’ material way.”

The letter doesn’t call for a specific course of action, but refers to ongoing conversations about the land, and acknowledges that it may take some time to figure out:

“This change, or even the idea of this change, could be very painful. For many this was our first and possibly only connection with an intact land base and with communal living….We do not wish to diminish this, but would to like keep this in perspective, remembering Indigenous people have lived in place since time immemorial….We feel that returning the land will strengthen and not weaken our familial bonds and is a step towards healing for all people.”

So far, I haven’t come across many responses to the letter, although comments on the post are mostly supportive. At Indian Country Today, Dina Gilio-Whitaker writes:

“It is a small ray of hope that some settlers are capable of standing in solidarity with indigenous peoples in a profoundly meaningful way to break down the oppressive systems that are threatening all of our futures, settler and indigenous alike.”

What do you think of this proposal? How can high-profile communities avoid being a “portal” for disruptive land use? Can we create rural communities in ways that don’t displace Indigenous residents? Read the Open Letter to Black Bear Ranch here and leave a comment below.