Feminist Spirituality and Gender: Lessons from Beyond Women-Only Space 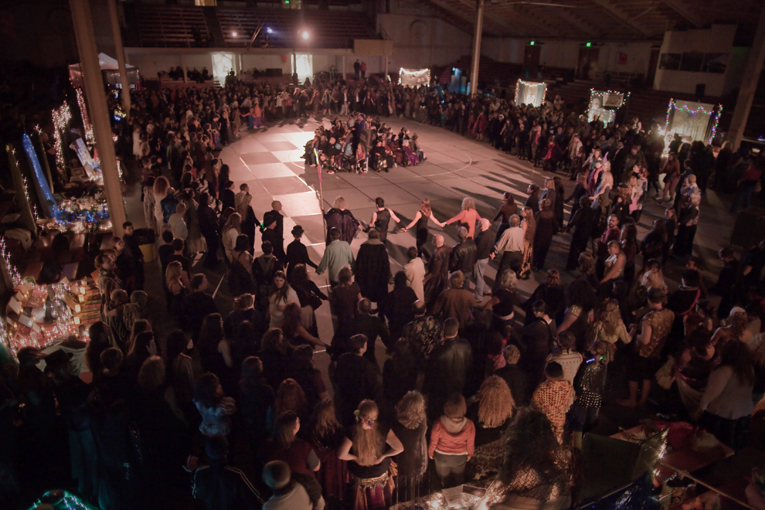 “This is women’s space and we come here to claim our power!” proclaims the priestess to a circle of 50 women, emphasizing her words by beating a drum at the end of her sentence. The women trill and yell and stomp their feet, smiles break out on the more timid faces in the group, and the energy in the room builds. There will be dancing, singing of sacred songs, opportunities to proclaim the release of old patterns, and celebration of calling new abundance and joy into our lives. The women have come to this gathering space in the middle of a snowbound Vermont February, invoking the goddesses Brigid and Artemis with poetry and song, and claiming their right to determine the course of their own lives. In this space each woman is reminded that she is a personal embodiment of the divine.

Last year I helped lead the ritual I describe above, and have participated in similar circles all over the country for 13 years. But increasingly I question the beliefs that are the source of our desire to claim women-only space.

While I still believe that for many people women-only ritual spaces are a valuable tool, I see incredibly rich healing work being done in all-genders ritual spaces. Modern goddess-centered spiritual communities are deeply rooted in feminism, but as we all should know by now, you don’t have to be a woman to be a feminist. The restructuring of power demanded by feminist theory benefits all people, breaking down hierarchies of power and giving people equal say in the conditions of their world. Just as many men are devoted to feminism, many men find that the spiritual philosophy of goddess-centered faith communities offers a deeply nourishing path aligned with their empowerment politics.

What purpose does it serve to bar these men from women-only spaces? Does this culture of women-only space still serve a worthwhile purpose, or does it perpetuate division? In these days of queer and transgender empowerment, are women-only spaces too limited a concept to encompass a flourishing diversity of gender?

When it comes to spiritual experience, we have to start where we stand. In a world still steeped in patriarchal power structures, it can feel like a deliciously audacious act of rebellion to claim women-only space, and by doing so declare our own authority over our spiritual lives. This is important work, and I myself have been deeply shaped by participation in many women’s communities, from attending a women’s college to training as a priestess for 11 years in a women’s spiritual tradition.

The empowerment offered to women in these spaces is very real. A strong women’s culture has sprung up from the nexus of second-wave feminism, lesbian separatist politics, the reconstruction of a goddess-centered spirituality based on the myths of female deities from around the world, and ecofeminist beliefs about our place in nature. This women’s culture has changed many lives for the better, including mine, and its influence has reached far beyond the women-only circles where it began.

However, in recent years I have started to see some cracks in the logic of separatism in these women’s spiritual communities. These cracks were invisible to me until I started participating in a feminist goddess-centered community that was open to all genders. This spiritual community gathers for a week-long camp once a year, is run by a consensus-based group of volunteer organizers with rotating roles, and contains an incredible diversity of gender, sexual orientation, age, and many other metrics of identity.

It was stunning to me, after years in women-only spaces, to discover that I felt just as safe and empowered in this all-genders space as I had among only women. The men I met there were not only deeply feminist (if anything the balance of power rested with the women leaders in the community), many of them were actively experimenting with a far broader gender expression than I was used to. Lots of playful drag and gender-role reversals popped up around camp, childcare and kitchen chores were shared equally among all members, and gender quickly became insignificant in the spiritual empowerment work we were doing together. We all worked on healing our culturally wounded masculine side and strengthening our feminine wisdom and power, we all sang sacred songs together under the starry late-summer sky, we all laughed and cried through the week as our hearts opened and our souls spoke to us.

I realized that for every woman who felt limited by the gendered expectations projected on her by our culture, there was a man who felt equally limited by masculine expectations. Shedding gender as a form of expectation and building an alternate culture based on bringing our inner selves out into the light became an incredibly healing and empowering practice for everyone involved. My experiences in this community sure made me wonder why all my spiritual circles had been limited to women before this!

Another wedge that widened the cracks in my devotion to women-only spaces was my increasingly nuanced understanding of gender identity. Over the past decade I’ve been blessed to live and work with some wonderful transgender folks, and learning about their experiences in our transphobic world has prompted me to become an advocate for transgender equality in my workplaces and also in my spiritual communities. Many women-only spaces struggle with the issue of transgender inclusion. The older lesbian-separatist belief that transwomen are really privileged men trying to infiltrate women’s spaces is heartbreakingly out of date, but policies rooted in this belief persist to a surprising degree in women-only spaces. These days I can’t comfortably participate in women’s spaces that exclude transwomen unless I’m actively agitating for change from the inside, and even then I’m ambivalent about it.

Even when transwomen are welcome (as they increasingly are), the binary-gender concept that underlies women-only space creates a difficult choice for those people whose gender identity does not easily fit in one of two categories. All-genders spaces solve these problems entirely, as well as allowing every person to explore a more fluid way to inhabit gender identity if they choose to.

Furthermore, as someone who identifies as a woman, I find that having my powerful self honored by people of all genders carries a deep power to it that is different than my experience in women-only spaces. In women’s space, I feel a strong sense of safety, affirmation, and support, but there is also a subtle thread of antagonism towards men that silently underlies the choice to exclude them. We build a strong culture of sisterhood and pledge our support to one another, and then re-emerge into our mixed-gender world with a sense of being warriors defending our right to be empowered. After years of being energized by this separatist form of power, I have realized that it can be a good first step to finding our female strength, but soon it begins to severely limit the allies we can make and the ways we can spread feminist change in the wider culture.

Being affirmed and supported as a priestess in all-gender communities has helped me realize that the feminist healing work I facilitate is needed and valued by people of all genders, and that the potential for cultural change greatly multiplies when we break down barriers to access based on gender. We can amplify the impact of our culture-building by opening the door based on who is ready for the work rather than based on their gender.

Despite all these theoretical criticisms, I still love my women’s Dark Moon Circle, and I’d throw a fit if my alma mater announced it was going co-ed. What about women-only space am I still attached to? While I see the avant-garde edges of feminist culture creating incredible new traditions around gender, I know most folks aren’t there yet. Throw a bunch of suburbanites into a cooperative, consensus-based community structure without any training and watch it crumble! Similarly, throw a bunch of men and women steeped in the gender norms of Standard American Culture into a goddess ritual together and you’ve got a recipe for disaster.

As anyone in the intentional communities movement can appreciate, alternative culture-building takes time and there are a lot of course-corrections along the way. While I find myself increasingly drawn to this work of creating gender-inclusive feminist spiritual communities, I know there are many women who need the spiritual support of a goddess-centered community in places where this culture-repair isn’t yet taking place, and women-only space may be the quickest, easiest, safest-feeling alternative.

Dynamic approaches to navigating the gender-based oppression of all people are being developed in the cultural laboratories of all-genders feminist spiritual communities. I believe that these solutions will spread, in the same way that many of the cultural traditions of women-only communities have trickled into the wider culture. I hope women who want to use women-only spaces to “claim their power” will have that opportunity, and that people who want to “claim their power” among fellow humans of all genders will increasingly have that opportunity as well.