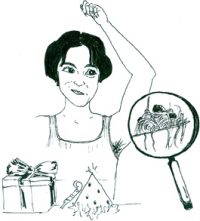 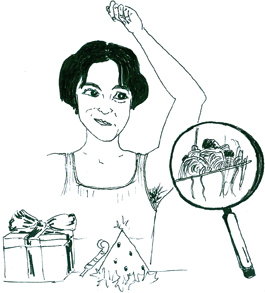 It was my birthday, and I was enjoying a good cuddle, drifting contentedly into that sleepy in-between state, when my partner’s words pulled me abruptly back to full consciousness. “I think you have spaghetti pits.”

I hadn’t heard talk of spaghetti pits in years. When I was a newish member of Twin Oaks, spaghetti pits were a common topic of conversation during the summer, following a close third behind conversations involving either the comparison of bathing habits or the difference between grits and hominy. It was commonplace to see people squinting at each other’s armpits, looking for the telltale orange halo on the hairs, trying to determine who could claim to have the worst case. Spaghetti pits were a badge of honor amongst the 20-something communards, proof that a) you did not shave your body hair; b) you sweated, which often implied physical work; c) you were not a daily bather; d) you did not put chemicals in your armpits; and, moreover e) you were proud of, or at least oblivious to, your body odor.

All of the above, except the last, were true of me at the time. I was fond of my own armpit smell, but I never invited other people to share it with me. It just seemed a little too intimate. So, in spite of the fact that I rightly deserved the spaghetti-pits badge of honor, I did not particularly want to get them, because it meant others would ask to inspect my armpits. To my good fortune, my armpit hairs made it through that summer or two without succumbing, and spaghetti pits seemed to me to fade from community consciousness after that.

I’ve wondered now and then over the past several years why spaghetti pits apparently disappeared from Twin Oaks after about 2005 or so. It’s possible that Twin Oakers have gotten cleaner since then; it’s been years since I heard a boastful conversation about who has gone the longest without a shower. It’s also possible that I just haven’t been party to the right conversations, or that the people who were most excited and educated about spaghetti pits dropped membership around then. Maybe spaghetti pits have lived happily on Twin Oakers without fanfare all along.

Have you thought about googling “spaghetti pits” yet, wondering what they are? You won’t find any hits (except for my blog post), so let me tell you. Nobody I know of has claimed to coin the term, so perhaps it’s a Twin Oaksism. It refers to the fact that affected armpit hairs are coated with a yellowy-orangish bacterial film that makes them appear thicker and lighter in color than unaffected hairs (depending on your hair color, of course), almost like spaghetti. And, that’s about all there is to spaghetti pits. Wikipedia has very slightly more to say about it (search for trichomycosis axillaris). Supposedly the infection also changes the armpit odor, making it stronger or more unpleasant, but that’s a subjective call.

Back to my unexpected birthday present.

I awkwardly tucked my chin and crossed my eyes as I tried to focus on the hairs in my left armpit. “See that one, compared with a normal hair?” Nope, I couldn’t see it. I was pretty sure my partner had to be making it all up. It didn’t make any sense for me to have spaghetti pits; it was so mild this summer that I couldn’t remember breaking a sweat in weeks. Determined to convince me, he got a pair of scissors and snipped a couple of hairs so I could compare them at a reasonable focal distance. Oh dear. The diagnosis was clear. There was no point in wondering why this was happening now, and not in 2004. Instead, I searched my memory for remedies. How had people overcome this plague eight or nine years ago? Witch hazel—I thought I remembered people using witch hazel. My partner was a spaghetti pits survivor from way back, though, and he vetoed that idea. He’d bathed his pits repeatedly in witch hazel with no success. The only thing that had worked, he said, was shaving.

I went back to scanning my memory, this time to figure out the last time I had shaved. I wasn’t sure. Maybe for a wedding in 2002? When I first stopped shaving, the act was a conscious feminist statement. I was nearly always aware of my visible body hair when I was out in public, and any decision to conform to mainstream expectations, even temporarily, would have been made only after a long internal dialog and conversations with feminist friends. Now, after many years, I don’t even think about it. Hairy pits are the norm at Twin Oaks, and, off the farm, if people look askance at me anymore, I don’t notice it. I am still attached to my body hair, not because of what it says about me, but because it IS me. The thought of shaving no longer bothers me because I might lose an opportunity to demonstrate that an adult woman can feel comfortable choosing to keep her armpit hair. It bothers me because I am comfortable with my choice to keep my body hair, and cutting it off would be…weird.

Spaghetti pits are weird, too, however, and it was no trouble this time to decide to shave. A housemate informed me that commercial anti-perspirants had worked for her, but shaving is cheaper and instantly effective. I headed to the courtyard to get a razor from the house closet. (I’m pretty sure the community didn’t even stock razors nine years ago. If you wanted to shave, the community would subsidize them, but you had to order them yourself.) Twenty minutes later, I peered at my infestation-free, denuded armpits in the mirror. It was strange to see myself without hair, but also fun to do something different, to feel unfamiliar. Still, I was in no way interested in remaining hairless, and suffering with itchy-poky armpit whiskers for several days afterwards only made me appreciate my usual maintenance-free locks more. Now that my hair has grown back, it is here to stay. Unless, of course, the orange coating makes another appearance.